Democracy or Theocracy – Who Decides?

Democracy or Theocracy – Who Decides?

“The only object, purpose, or use for taxation by law in this state must be exclusively secular. There is no such source and cause of strife, quarrel, fights, malignant opposition, persecution, and war, and all evil in the state, as religion. Let it once enter into our civil affairs, our government would soon be destroyed. Let it once enter into our common schools, they would be destroyed.” (State ex rel Weiss v. Dist. Bd. Of Sch. Dist. No. 8 of Edgerton, 44 N.W. 967, 981 (1890) (Orton, J., concurring). With this case the Wisconsin Supreme Court ruled that the Wisconsin Constitution prohibited bible readings in the public schools.  They nailed it.

They were only 100 years out from a Constitution that was deliberately secular to avoid the religious wars and persecution the founders had themselves experienced.  Here we are today, more than another 100 years out from that case and now the religious nationalists think they know better what the founders thought. They claim that the U.S. was founded as a Christian nation when nothing could be further from the truth. The only mention of religion was in Article VI saying no religious test can be used for public office.  Then, of course, the First Amendment that came later mandating that government not establish a church but let people express their own religion, or lack of one, as they please.

Every amendment has limits.  My arm can swing freely as far as your nose. Every amendment has restrictions – not yelling fire in a crowded theatre or slandering someone or buying a cannon for home use or searching your house without cause or imprisoning you in horrible conditions. Today the Christian nationalists seem to think there are no limits on their expression of their religion even if it breaks the law or interferes with the rights or health of another person.

The Secular Coalition was founded ten years ago to counter this rising threat.  Today it consists of the 501(c )4 Coalition and 501 (c )3 Communities. The Coalition focuses on lobbying and public policy.  Over the years our lobbyist has made steady inroads into the religious lock on the legislature.  The number of secular “invocations” has increased dramatically year after year though not without constant interference.  The weekly bible study at the capital was countered with a weekly secular study that is the only one in the nation.  While we still haven’t the clout to get bills passed, we have some power to get them stopped in conjunction with other like-minded people.

The  Communities part of the organization is only a few years old and focuses on education (secular studies, community presentations) and legal responses. Since 2016, we have dealt with 54 complaints ranging from government overstep to school meddling to businesses forcing their employees to listen to bible readings and prayers.

One ongoing case deals with an alleged children’s ranch run by a religious organization in Benson that more resembles a cult or a prison.  They receive 85% of their monies from taxpayer dollars and used some of it to erect a huge cross in the tiny playground. 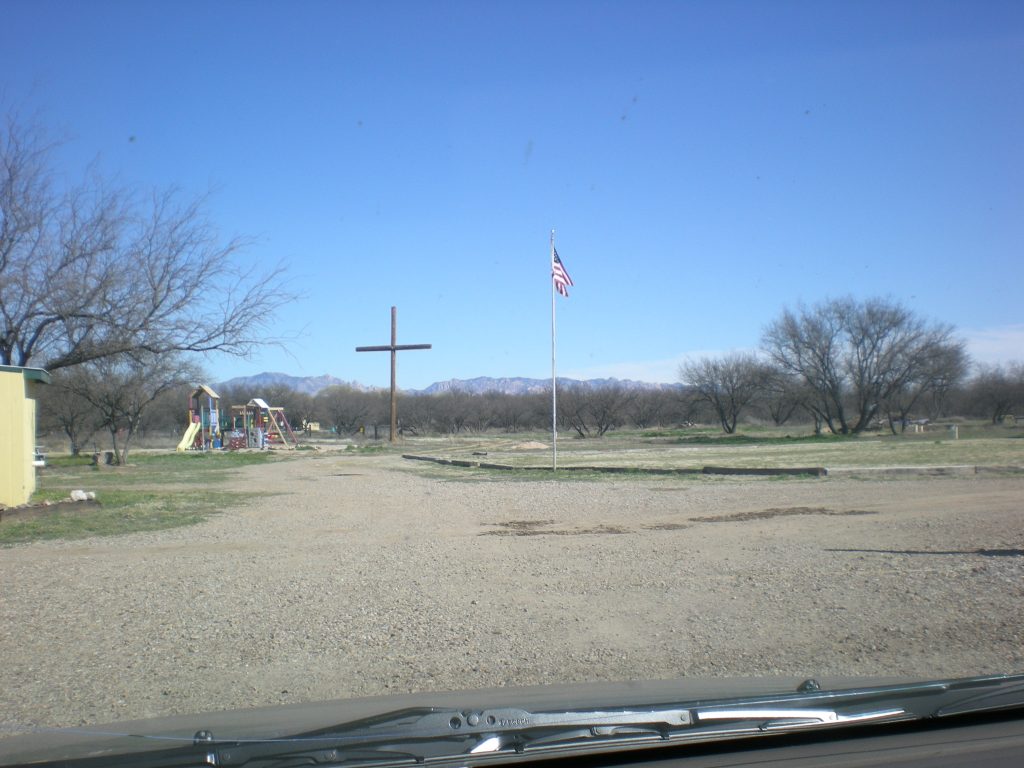 It took ten single-spaced pages to list all the constitutional, statutory and procedural violations with this contract.  The governor and attorney general ignored it.  Their contract with the state expired on March 31but the state renewed it on an emergency basis – without the proper paperwork to show any emergency.  We filed a challenge through the administrative procedures and once again, they refuse to respond.

At Camp Verde, the school board voted 4-0 to offer an elective bible study class this fall.  They can offer such a class under AZ law but with very strict guidelines. Instead, the board chose the NCBSPS curriculum that has twice been declared unconstitutional for its blatant proselytizing and gross inaccuracies.  The closing of school has scuttled a lot of plans so we are not sure what is on tap for the fall.  But we continue to educate and agitate. 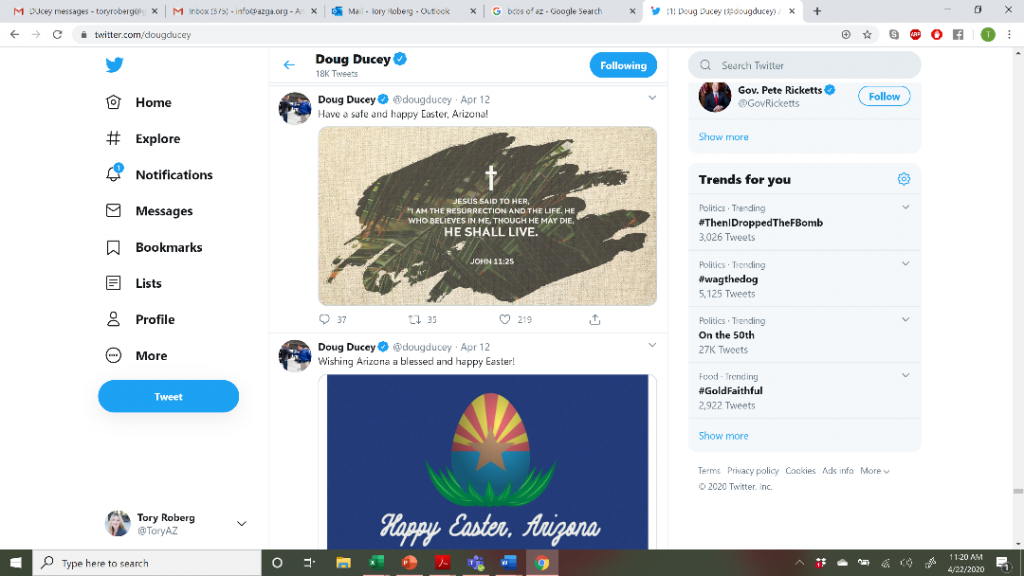 We along with several national organizations are documenting this pattern and practice.

One of the more outlandish examples of theocracy creep was this “Pray with the Police” event with the actual police chief in the photo advertising a meeting scheduled for a city-owned building and not mentioning that it was sponsored by a religious group. 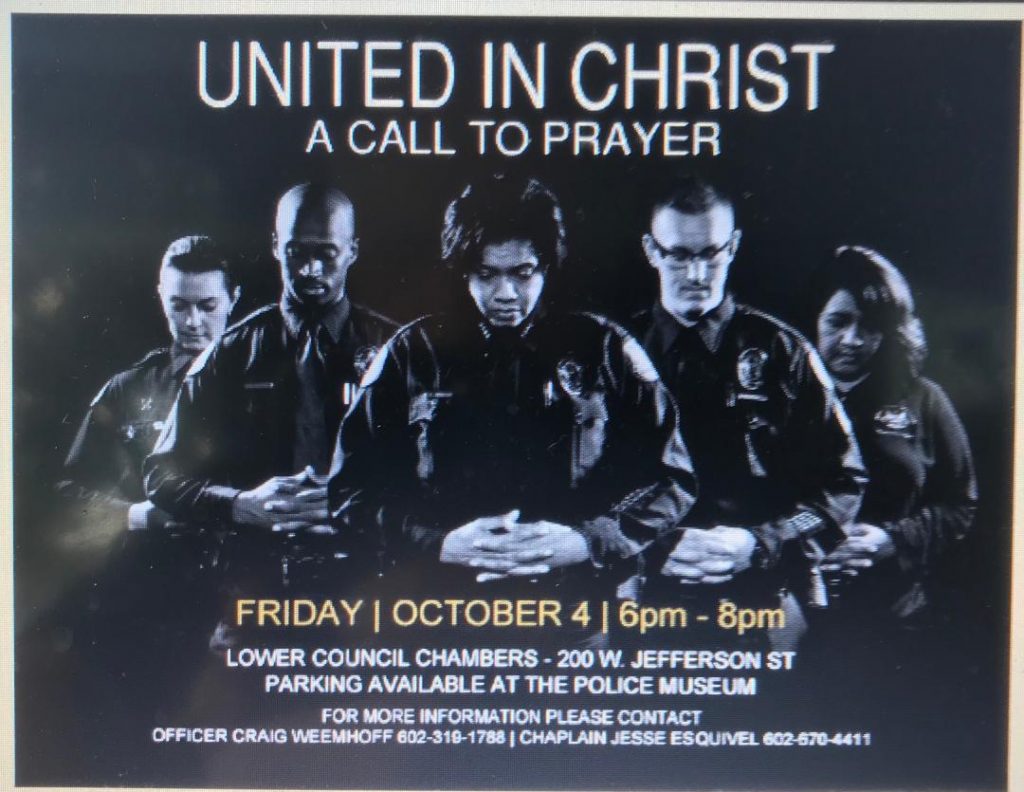 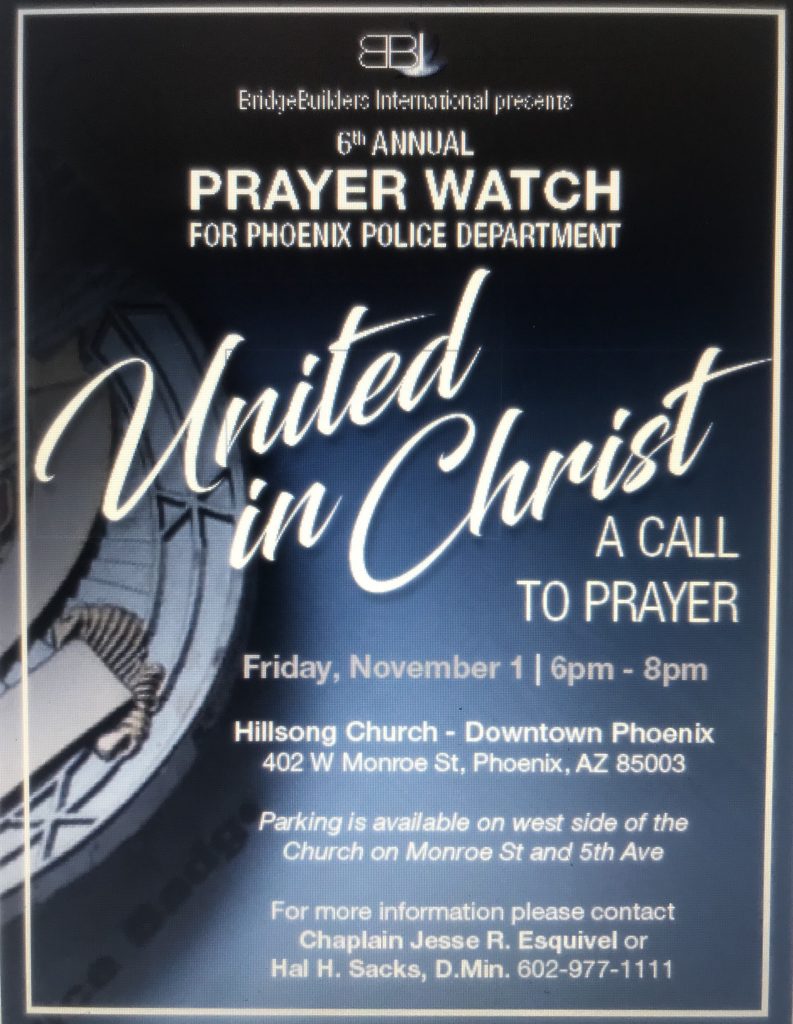 Given the history of violence toward people of color by the Phoenix police, it would have been more appropriate to pray for the victims.

After intervention, it became “Pray for the Police,” moved to a church, and showed who the sponsor was.

Another hilarious example was a church that held a Trump rally and pretended it wasn’t.  The pastor said he was there but he never saw Jan Brewer or Trump photos. 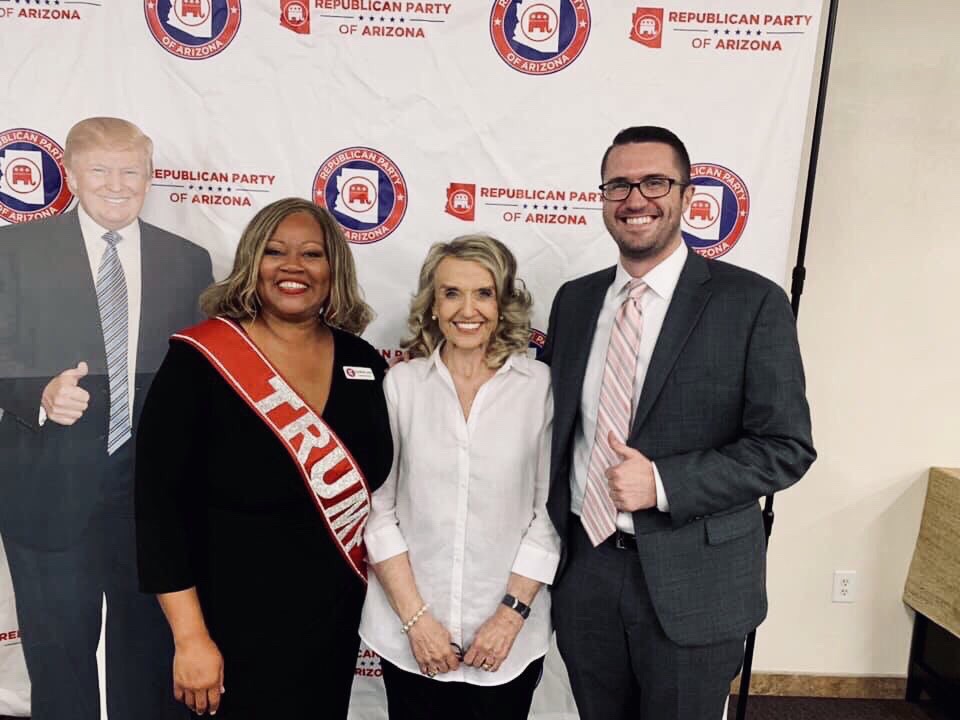 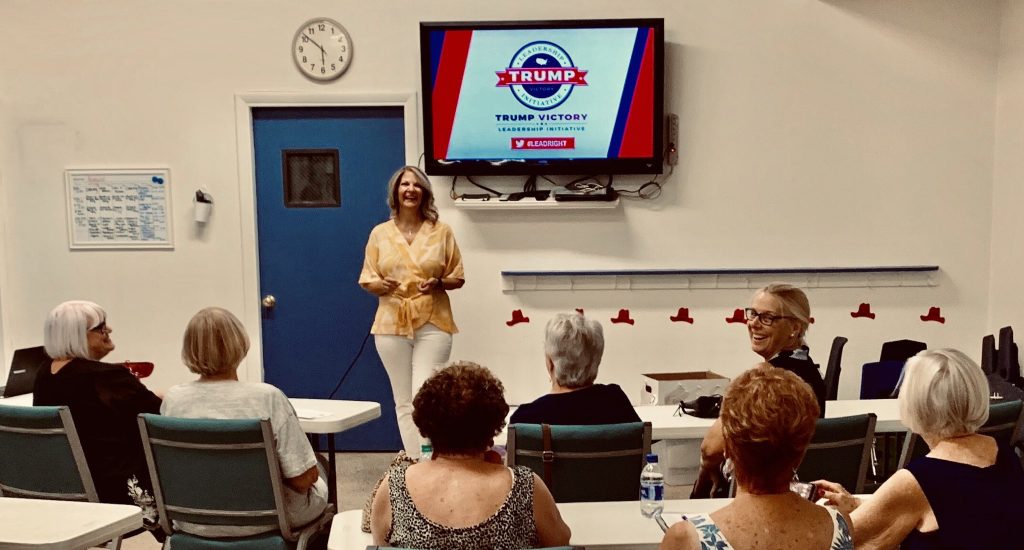 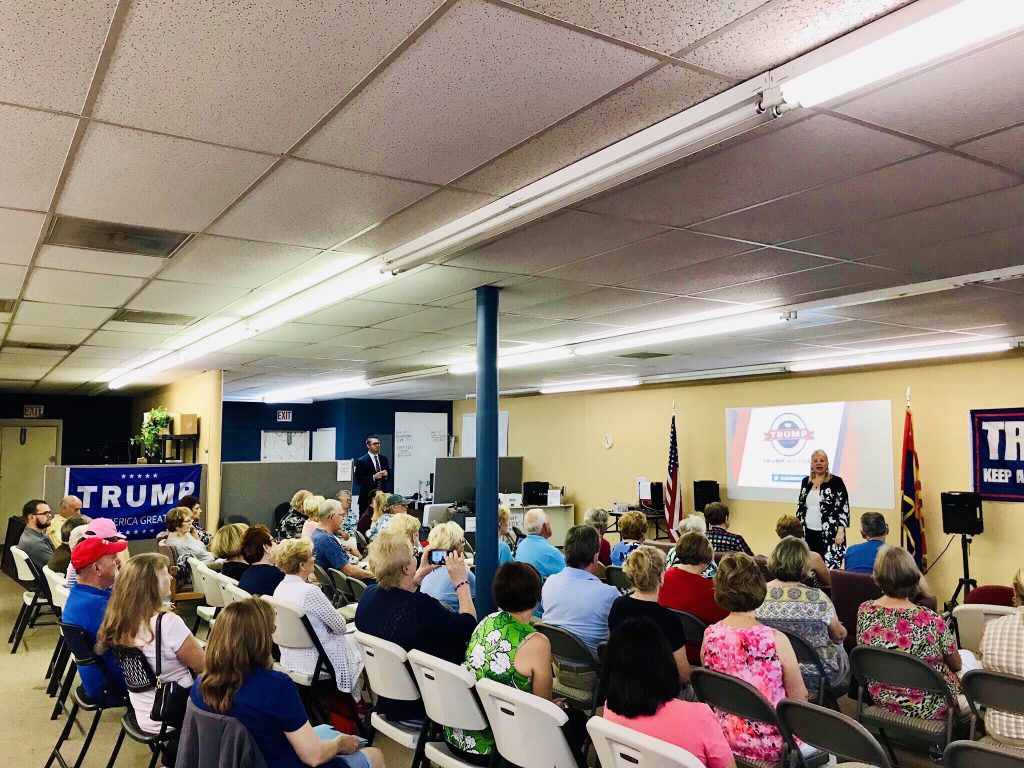 He never saw any Trump signs.

He also never told me he was blind.  All has been reported to the IRS but with this administration, it’s doubtful they will act.

The U.S. experiment to create a country without a King and without religious dogma should not die.  ADF is a Scottsdale based law firm with 300 attorneys around the country and a $52 million-dollar budget (some from the AZ license plates In God We Trust) whose sole aim is to destroy secular democracy and install their version of their religion.  We cannot allow them to overturn democracy with theocracy.

Secular Coalition isn’t even a fly in the ointment of this gigantic behemoth.  But joined together with people and groups around the country, we are fighting back and winning.  You can join us.  Go to the web site https://secularaz.org Join a local freethinking group. Donate your talents and unique skills. Work for the candidate of your choice. Vote in November. The only wall we need is the one between church and state.