Every Democrat voted for the measure, as did eight Republicans. 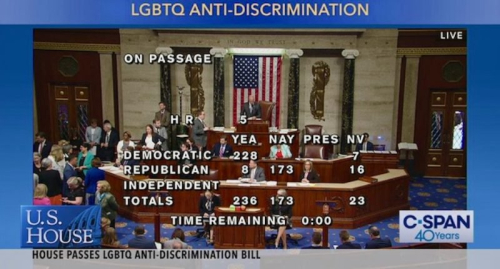 The Equality Act would expand the Civil Rights Act of 1964 and the Fair Housing Act to ban discrimination in employment, housing, jury selection and public accommodations based on sexual orientation and gender identity.

“This legislation will provide members of LGBTQ Americans protections from being denying medical care or being fired or thrown out of their homes,” House Judiciary Committee Chairman Jerrold Nadler (D-N.Y.) said on the floor ahead of the vote.

He said the bill would expand the definition of “who is understood to be included in the Declaration of Independence.”

“Today on this day we have an opportunity to send a message now to help end discrimination in our country and set all of our people free,” Lewis said.

The measure, spearheaded by Rep. David Cicilline (D-R.I.), was expected to be approved but faced opposition from conservatives, who said it would infringe upon people’s “religious liberties” (code for “freedom to discriminate”).

“In fact, this bill legalizes discrimination — government imposed top-down discrimination against those with time-honored views of marriage and gender,” Rep. Vicky Hartzler (R-Mo) said in remarks on the floor ahead of the vote.

Pity the religious bigots who would no longer be able to discriminate against the LGBTQ community without consequences.

More than 200 businesses, including Facebook, Google, Hilton and JPMorgan Chase, backed the measure. Groups opposing it included the Heritage Foundation and the Family Research Council (but of course, it is their only reason for existence).

The bill faces an uphill battle in the Republican-controlled Senate, where it is unlikely Majority Leader Mitch McConnell (R-Ky.) will bring the measurer up for a vote.

President Trump is also unlikely to sign the bill should it make it through both chambers.

Take back the Senate and elect a Democratic president in 2020 and this bill will be enacted.