Democrats Have Always Been Better For The Economy … Always

Home/National Elections, National Politics/Democrats Have Always Been Better For The Economy … Always
Previous Next

Democrats Have Always Been Better For The Economy … Always

The “official” unemployment rate fell to 8.4% in August as businesses continued emerging from broad shutdowns imposed early in the coronavirus pandemic, the Bureau of Labor Statistics reported earlier this month.

But CNBC explains Why the real unemployment rate is likely over 11%:

That’s the lowest rate since unemployment exploded in April, to levels unseen since the Great Depression. It would also mean the official rate dipped below the peak seen during the country’s last downturn, known as the Great Recession.

But the true rate in August is likely much higher than the official figure — perhaps even exceeding 11%, according to labor economists. 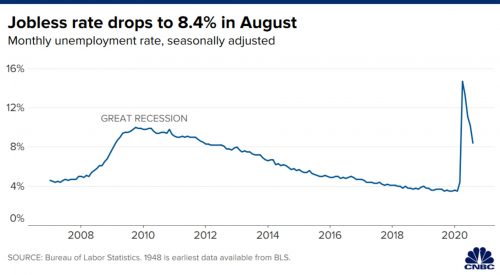 A rate above 11% would mean the country remains in the throes of the worst period of joblessness in post-World War II history. It would mean roughly 1 in 9 people who want a job and are able to work can’t find employment.

Before the coronavirus pandemic, the highest post-war unemployment rate in the U.S.was 10.8%, set in 1982.

Donald Trump is presiding over the worst economic downturn since the Great Depression. It is largely the result of his own incompetent mishandling of the coronavirus pandemic. It didn’t have to be this way, as other countries around the world have demonstrated.

The coronavirus pandemic is not just a health disaster, but an economic disaster. Access Information Services provides this factoid, Study: 40% of businesses fail to reopen after a disaster:

According to a report from the Federal Emergency Management Agency (FEMA), 40% of businesses do not reopen following a disaster. On top of that, another 25% fail within one year.

If you think that getting past the one year mark means a company is out of the woods, think again. The United States Small Business Administration found that over 90% of companies fail within two years of being struck by a disaster.

That’s an alarming percentage of businesses that fail after a disaster.

Business Insider maintains a list of major company layoffs. The coronavirus outbreak has triggered unprecedented mass layoffs and furloughs. Here are the major companies that have announced they are downsizing their workforces.

“Temporary” furloughs are now morphing into permanent layoffs. The economy is about to get worse without additional economic stimulus from the Congress. Millions of Americans are facing long-term unemployment and an eviction crisis this fall.

Despite presiding over an economic disaster on a scale not seen since the Great Depression, Americans inexplicably still buy into the myth that Republicans better manage the economy. “Likely voters trust Trump over Biden on just one issue: the economy, by 5 points,” in almost every recent poll. Sigh.

Every four years I have to explain that Democrats have always been better for the economy … always. Here is a report from the Joint Economic Committee of the House Banking Committee from 2016. The Economy Under Democratic vs. Republican Presidents:

[A] recent paper by economists Alan Blinder and Mark Watson states: “The superiority of economic performance under Democrats rather than Republicans is nearly ubiquitous; it holds almost regardless of how you define success.” Fact-checking groups have investigated similar statements and have found time and time again that they are true. Moreover, past research shows that stock market returns are also higher under Democrats.

Michael Tomasky recently explained, “because the GOP is the party of big business, it is universally assumed that Republicans are better at handling the economy … It’s hard wired, and it’s wrong. Dead wrong.” Everyone Does Better When the President’s a Democrat:

The other day, Joe Biden pointed out that the US economy has lost 4.7 million jobs since Donald Trump took office. What he didn’t say (and Democrats say far too infrequently) is that, over the past century, Democrats are 300% better at creating jobs than Republicans!

That’s a shocking figure for most people, most of whom still think that Republicans are better for the economy, but, in the 100 years since 1920, Democratic Administrations have created 85 million jobs and Republican Presidencies only 28 million jobs. This is a staggering difference that should put to rest forever the argument about whether Democrats or Republicans are better for the economy!

How big is the difference in job creation between Democratic Presidents and Republican Presidents? 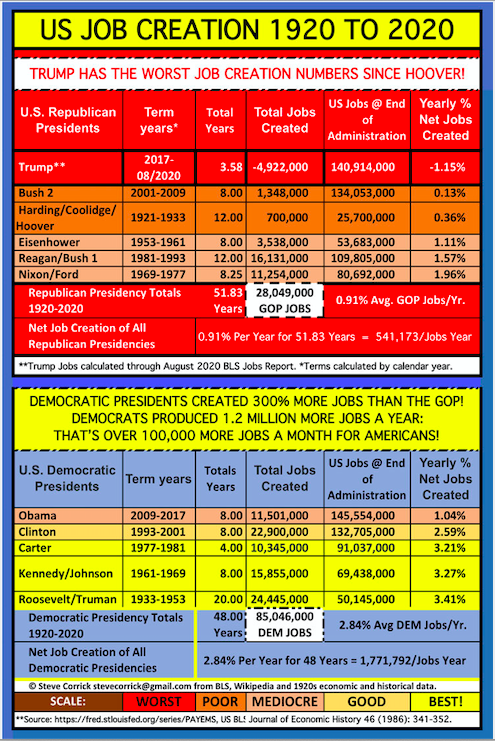 Compared to the Republicans, since 1920 Democrat Administrations created:

To be fair, fiscal moderates Eisenhower, Nixon and Ford, who did not practice voodoo economics, did not crash the economy, but their job results were so-so. Reagan produced a lot of jobs but also the stock market crashed in 1987 and the country suffered ongoing doldrums until Bill Clinton revitalized the economy and became the last president to balance the yearly Federal Deficit.

Before him, Johnson balanced 1 budget, Eisenhower balanced 1 budget and Truman balanced 4 budgets. For comparison, the Federal Deficit has gone up every year under Trump, hit $984 Billion in 2019 and this year, the Covid-Denier’s 2020 budget deficit is projected to be around an almost incomprehensible $3.3 TRILLION Deficit in 2020…for a four-year total of $5.728 Trillion Dollars—the worst four-year increase of US Debt in history.

This is not new news, but, for Democrats, it is hugely under-discussed information. That’s why one poll [earlier this year] showed Trump up 10% on perceived ability to handle the economy. This should not be! DEMOCRATS PRODUCE 300% MORE JOBS!! 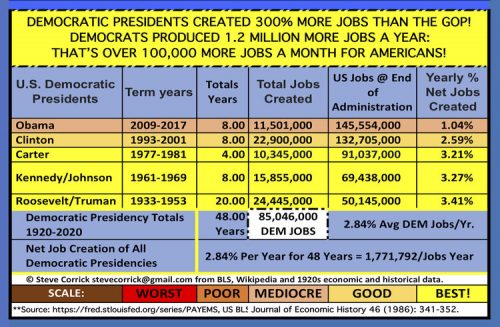 But Democrats have to quit playing defense and start strongly showing, again and again how much better Democrats have been for job gains, debt control and prosperity for the Middle Class and Poor over the last 100 years…because THIS IS THE BIGGEST AND MOST DAMAGING REPUBLICAN LIE. Republicans are not great for the economy: At best Republican economic results are mediocre and, if, like Hoover, Bush 2 and Trump, they practice the borrow and burn tactics of Reaganomics, they are as disastrous at managing economies as our 6 bankrupcy, 3500 lawsuit, 3 wives, 20,000 lies, deceiver-in-chief was in his unending string of failed businesses…and yet they continue to win elections on their perceived economic superiority.

However, sometimes the Big Lie doesn’t work, because someone, some Party, and then a lot of someones, refuse to accept the lie and continue to pull back the curtain. And 2020 is the time to destroy this lie forever. 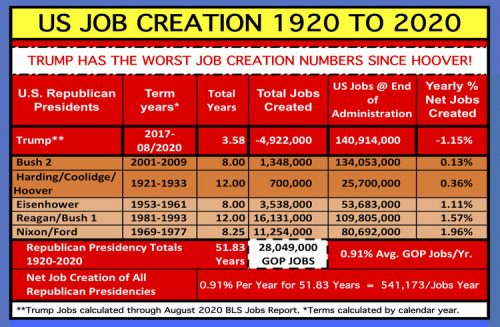 President Trump often claims the economy was the “greatest in history” before the coronavirus pandemic hit. In reality, it looked similar to Obama’s second term, with a few exceptions. Heather Long at the Washington Post explains, The Trump vs. Obama economy — in 16 charts:

As the United States suffers the worst economic downturn in nearly a century, key questions remain: How quickly can the nation recover, and who has the better track record to get us there?

The dire job losses from the spring are close to half recovered, but 13.6 million workers remain unemployed. Stocks are back near record highs, but food bank lines are long and evictions in parts of the country are growing.

Perhaps the best case Trump can make for improvement since he took office is higher wages and a boost in confidence. The average worker’s pay finally grew more than 3 percent a year under Trump, and there was a drop in the number of Americans on food stamps. Consumer and business confidence also jumped after Trump’s election and remained high after the GOP tax cuts took effect in 2018. As recently as February, many Americans rated this as the best economy since the late 1990s. Now those gains are wiped out.

The pandemic recession triggered more than 22 million job losses, modern-day bread lines and millions of pay cuts. Even before the pandemic hit, the picture was mixed. Manufacturing, business investment and growth were slowing noticeably heading into 2020.

While there’s ongoing debate about how much influence presidents really have over the economy, the charts below illustrate the trends under then-President Barack Obama and Trump.

The United States experienced some of its best years of job gains in 2014 and 2015 in Obama’s second term when the economy added more than 225,000 jobs a month. Employment continued to be strong under Trump — until the pandemic hit.

Average monthly job gains under Trump peaked at 193,000 in 2018. Economists call this very robust, especially given the recovery was nearly a decade old by then. But the devastation from the pandemic wiped out a decade’s worth of jobs gains in the spring. By August, 48 percent of the jobs had returned.

Trump says he had the “greatest economy in history” during the GOP convention, a claim fact-checkers quickly marked as false. A look at economic growth shows why.

Excluding 2020, growth in Trump’s initial three years in office was 2.5 percent — barely above Obama and well below the growth under the Clinton, Reagan and Johnson administrations.

The U.S. unemployment rate hit a half-century low of 3.5 percent in late 2019 and stayed around that level through February 2020. Trump frequently touted the job news, though he often left out that the unemployment rate was a fairly low when he took office (4.7 percent) and has been steadily declining since 2011.

Long goes into more granular detail in her reporting.

Republican campaign consultant Karl Rove’s campaign tactic has always been “attack your opponent’s perceived strength.” In this case, Trump’s last remaining “strength” is the economy,  a misperception if not an illusion created by his alternate reality propaganda machine. Kick out his last remaining leg with the cobra kai “sweep the leg” crane kick, and this election turns into a landslide loss for him. Trump is the worst Republican president since Herbert Hoover on the economy, and Democrats need to do a far better job of driving this message home. I know that this should be obvious to any sentient human being, but in the age of Epistemic closure and the ‘conservative misinformation feedback loop’ media bubble, it bears repeating ad nauseam.