Demographic doom for the GOP: is 2016 the year of Latino voters?

Home/AZ Politics/Demographic doom for the GOP: is 2016 the year of Latino voters?
Previous Next

Demographic doom for the GOP: is 2016 the year of Latino voters? 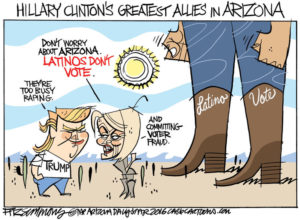 Some Republicans dismissed the notion that Democratic-leaning Hispanics will become a significant enough force to tip the balance to Clinton.

“Nah,” former Arizona governor Jan Brewer said in an interview. “They don’t get out and vote. They don’t vote.”

Brewer, the state’s former governor, said immigration is such a big issue in the state that many voters will be receptive to Trump’s mantra of building a wall with Mexico.

“It’s wishful thinking on their behalf,” she said. “Donald Trump is going to secure the border, and that is a very important issue in Arizona.’’

On a bilingual conference call with supporters on Wednesday night, Clinton reminded them that Brewer had dismissed the prospect that Clinton might win the election because Hispanic voters “don’t vote.”

“So let’s prove the former Arizona governor Jan Brewer is wrong and let’s make sure we have the biggest turnout of Latino voters in history,” she added.

Brewer’s comments to the Boston Globe instantly became what the campaign called “bulletin board material,” a source of motivation to push for higher turnout. 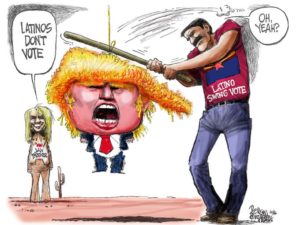 Clinton cited encouraging signs in early voting in Nevada and Florida that indicate high turnout among Democrats. The campaign has said that 133,000 Hispanic voters have already cast their ballot in Florida, a 99 percent increase over this point in 2012. And the campaign also said that early voting returns indicate strong turnout among Latinos and women, both groups they expect to lean toward Clinton.

Amanda Renteria, Clinton’s national political director, added that the campaign has been pleasantly surprised by the initial trends in early voting in states like Arizona and Texas, where Democrats had previously not had a shot at winning in presidential races.

Early voting is surging in Arizona, normally a Republican state but one that Clinton has targeted. More than 616,000 ballots have been cast and Democrats are about even with Republicans, 37 percent to 38 percent. Another 25 percent were independent or unknown. At this point in 2012, Republicans led by more than 7 percentage points. Ballots rose in Arizona especially among younger adults and Latinos.

If you want your voice heard, VOTE!