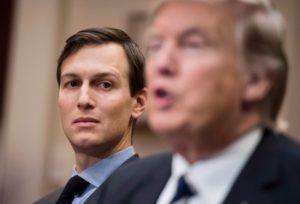 The transactions, some of which involved Mr. Trump’s now-defunct foundation, set off alerts in a computer system designed to detect illicit activity, according to five current and former bank employees. Compliance staff members who then reviewed the transactions prepared so-called suspicious activity reports (SAR) that they believed should be sent to a unit of the Treasury Department that polices financial crimes. [The Financial Crimes Enforcement Network (FinCEN)].

But executives at Deutsche Bank, which has lent billions of dollars to the Trump and Kushner companies, rejected their employees’ advice. The reports were never filed with the government.

The nature of the transactions was not clear. At least some of them involved money flowing back and forth with overseas entities or individuals, which bank employees considered suspicious.

Real estate developers like Mr. Trump and Mr. Kushner sometimes do large, all-cash deals, including with people outside the United States, any of which can prompt anti-money laundering reviews. The red flags raised by employees do not necessarily mean the transactions were improper. Banks sometimes opt not to file suspicious activity reports if they conclude their employees’ concerns are unwarranted.

But former Deutsche Bank employees said the decision not to report the Trump and Kushner transactions reflected the bank’s generally lax approach to money laundering laws. The employees — most of whom spoke on the condition of anonymity to preserve their ability to work in the industry — said it was part of a pattern of the bank’s executives rejecting valid reports to protect relationships with lucrative clients.

“You present them with everything, and you give them a recommendation, and nothing happens,” said Tammy McFadden, a former Deutsche Bank anti-money laundering specialist who reviewed some of the transactions. “It’s the D.B. way. They are prone to discounting everything.”

Ms. McFadden said she was terminated last year after she raised concerns about the bank’s practices. Since then, she has filed complaints with the Securities and Exchange Commission and other regulators about the bank’s anti-money-laundering enforcement.

Deutsche Bank’s decision not to report the transactions is the latest twist in Mr. Trump’s long, complicated relationship with the German bank — the only mainstream financial institution consistently willing to do business with the real estate developer.

Congressional and state authorities are investigating that relationship and have demanded the bank’s records related to the president, his family and their companies. Subpoenas from two House committees seek, among other things, documents related to any suspicious activities detected in Mr. Trump’s personal and business bank accounts since 2010, according to a copy of a subpoena included in a federal court filing.

Mr. Trump and his family sued Deutsche Bank in April, seeking to block it from complying with the congressional subpoenas. The president’s lawyers described the subpoenas as politically motivated.

Suspicious activity reports are at the heart of the federal government’s efforts to identify criminal activity like money laundering and sanctions violations. But government regulations give banks leeway in selecting which transactions to report to the Treasury Department’s Financial Crimes Enforcement Network.

Lenders typically use a layered approach to detect improper activity. The first step is filtering thousands of transactions using computer programs, which send the ones considered potentially suspicious to midlevel employees for a detailed review. Those employees can decide whether to draft a suspicious activity report, but a final ruling on whether to submit it to the Treasury Department is often made by more senior managers.

In the summer of 2016, Deutsche Bank’s software flagged a series of transactions involving the real estate company of Mr. Kushner, now a senior White House adviser.

Ms. McFadden, a longtime anti-money laundering specialist in Deutsche Bank’s Jacksonville office, said she had reviewed the transactions and found that money had moved from Kushner Companies to Russian individuals. She concluded that the transactions should be reported to the government — in part because federal regulators had ordered Deutsche Bank, which had been caught laundering billions of dollars for Russians, to toughen its scrutiny of potentially illegal transactions.

Ms. McFadden drafted a suspicious activity report and compiled a small bundle of documents to back up her decision.

Typically, such a report would be reviewed by a team of anti-money laundering experts who are independent of the business line in which the transactions originated — in this case, the private-banking division — according to Ms. McFadden and two former Deutsche Bank managers.

That did not happen with this report. It went to managers in New York who were part of the private bank, which caters to the ultrawealthy. They felt Ms. McFadden’s concerns were unfounded and opted not to submit the report to the government, the employees said.

Ms. McFadden and some of her colleagues said they believed the report had been killed to maintain the private-banking division’s strong relationship with Mr. Kushner.

After Mr. Trump became president, transactions involving him and his companies were reviewed by an anti-financial crime team at the bank called the Special Investigations Unit. That team, based in Jacksonville, produced multiple suspicious activity reports involving different entities that Mr. Trump owned or controlled, according to three former Deutsche Bank employees who saw the reports in an internal computer system.

Some of those reports involved Mr. Trump’s limited liability companies. At least one was related to transactions involving the Donald J. Trump Foundation, two employees said.

Deutsche Bank ultimately chose not to file those suspicious activity reports with the Treasury Department, either, according to three former employees. They said it was unusual for the bank to reject a series of reports involving the same high-profile client.

Mr. Trump’s relationship with Deutsche Bank spans two decades. During a period when most Wall Street banks had stopped doing business with him after his repeated defaults, Deutsche Bank lent Mr. Trump and his companies a total of more than $2.5 billion. Projects financed through the private-banking division include Mr. Trump’s Doral golf resort near Miami and his transformation of Washington’s Old Post Office Building into a luxury hotel.

When he became president, [Trump] owed Deutsche Bank well over $300 million. That made the German institution Mr. Trump’s biggest creditor — and put the bank in a bind.

Senior executives worried that if they took a tough stance with Mr. Trump’s accounts — for example, by demanding payment of a delinquent loan — they could provoke the president’s wrath. On the other hand, if they didn’t do anything, the bank could be perceived as cutting a lucrative break for Mr. Trump, whose administration wields regulatory and law enforcement power over the bank.

In the past few years, United States and European authorities have punished Deutsche Bank for helping clients, including wealthy Russians, launder funds and for moving money into countries like Iran in violation of American sanctions. The bank has paid hundreds of millions of dollars in penalties and is operating under a Federal Reserve order that requires it to do more to stop illicit activities.

Two former employees said that they had raised concerns about transactions involving companies linked to prominent Russians, but that managers had told them not to file suspicious activity reports. The employees were under the impression that the bank did not want to upset important clients.

Several employees said they had complained about the bank’s anti-money laundering processes to Joshua Blazer, the head of Deutsche Bank’s financial crimes investigations division in Jacksonville, and had then been criticized for having a negative attitude. One employee said she resigned last summer over concerns about the bank’s ethics.

Ms. McFadden’s job at Deutsche Bank was to inspect clients and transactions in the company’s private-banking division — the unit that lent money to Mr. Trump. She joined the bank in 2008, after working for Bank of America, also in Jacksonville.

Around the time she flagged the Kushner Companies’ transactions, Ms. McFadden said, she also complained about how the bank was scrutinizing the accounts of high-profile customers, such as those in public office. Those customers — known as politically exposed persons — are regarded as at heightened risk of being involved in corruption. As a result, their accounts are subject to extra vetting.

Ms. McFadden said she had told her superiors that dozens of politically exposed clients of the private-banking division, including Mr. Trump and members of his family, were not receiving that added attention. Her superiors told her to stop raising questions, according to Ms. McFadden and the two former managers.

After taking her complaint to the human resources department, Ms. McFadden was transferred to another division. She was terminated in April 2018. The bank told her that she was not processing enough transactions.

Ms. McFadden disputed that. She said her superiors had reduced the number of transactions she was assigned to review after she voiced her concerns. She and the two former managers said they perceived her termination as an act of retaliation.

“They attempted to try to silence me,” she said. “I’m at peace because I know that I did the right thing.”

A federal judge is expected to rule on the congressional subpoena for Deutsche Bank records this coming week, which the Trump crime family sued to squash. Trump’s attempt to squash congressional subpoena for financial records does not go well. The Attorney General of New York is already in possession of some Deutsche Bank records from the state’s prosecution of the Trump Foundation, which was forced to shut down last year. Trump Foundation Will Dissolve, Accused of ‘Shocking Pattern of Illegality’.

It was widely believed that Special Counsel Robert Mueller’s A-list team of financial crimes prosecutors were examining these Trump and Kushner financial transactions, but it increasingly appears that this was never the case.

The Special Counsel appears to have limited its investigation to the financial transactions of Paul Manafort and his assistant Robert Gates. Was this because Donald Trump said looking into his finances “would cross a red line” in which he would fire the Special Counsel? (And according to the Mueller Report, did attempt to fire him).

And why is Deutsche Bank allowed to continue operating, given its history? Shouldn’t prosecutors use RICO to take apart this criminal enterprise and to impose the corporate death penalty to terminate this bank?