The Justice Department on Friday released a transcript of a call from Donald Trump’s attorney John Dowd to Rob Kelner, the lawyer for Trump’s former national security adviser Michael Flynn, where he sought information about Flynn’s discussions with the special counsel.

Dowd also wanted to remind Flynn about “the President and his feelings towards Flynn.”

The transcript was submitted to a federal court in Washington following a judge’s order to submit it. 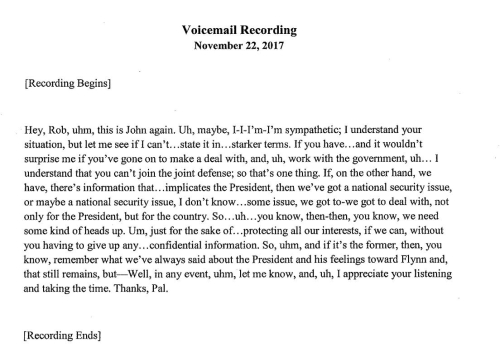 However, the Justice Department refused to turn over transcripts of Flynn’s calls with Russian officials, including then-Russian ambassador Sergey Kislyak, as was expected after Judge Emmet Sullivan ordered prosecutors to file those publicly.

Regarding the Kislyak call, prosecutors appear to say they don’t believe they need to hand over other recording transcripts they may have involving Flynn. But their explanation in the filing Friday isn’t clear.

“The government further represents that it is not relying on any other recordings, of any person, for purposes of establishing the defendant’s guilty or determining his sentence, nor are there other recordings that are part of the sentencing record,” the Friday filing says, in the only sentence apparently addressing their response to Sullivan’s order for the Flynn transcripts of calls with Russians.

Separately, the Justice Department hasn’t released any additional parts of the Mueller report that were previously confidential. The judge had told prosecutors they needed to make public redacted sections of the report that pertained to Flynn by today. Prosecutors said Friday that all of the information about Flynn or that Flynn gave to Mueller that made it into the report is already public.

I would expect Judge Emmet Sullivan is going to have something to say about this defiance of his lawful order.

UPDATE 6/5/19: This is somewhat surprising from this judge. Federal Prosecutors Don’t Have to Disclose Secret Flynn Transcripts, Judge Says:

A federal judge on Tuesday told prosecutors they did not have to make public highly classified transcripts of Michael T. Flynn talking about sanctions with the Russian ambassador in December 2016.

The judge, Emmet G. Sullivan of the United States District Court for the District of Columbia, who is overseeing Mr. Flynn’s case, had previously ordered prosecutors to disclose the information by the end of last month.