Donald Trump, no longer enjoying a commanding lead over his competitors (Dr. Ben “The Blade” Carson leads or is tied with Trump in some recent polls), has decided to go back to the well of nativist and racist anti-immigrant hatred once again that rocketed him to the top of the polls this summer.

A good showman always gives the audience what they came to see, and today’s GOP is the modern-day equivalent of the anti-immigrant Know-Nothing Party of the mid-19th Century. They are the Mass Deportation Party.

“The Donald” did not disappoint them at the FOX Business Network/WSJ debate this week. Trump doubled-down on his call to round up the estimated 11 million undocumented immigrants in the U.S. and to deport them all ASAP.

Trump was later asked how he intended to accomplish this herculean feat. Donald Trump calls for a ‘deportation force’ to remove undocumented immigrants:

Trump was initially asked about his immigration plan Wednesday morning and then pressed by MSNBC’s Mika Brzezinski on whether the plan is truly practical.

“Okay, conceptually, I understand what you’re saying and what you’re describing. But still tell me the how. Are you going to have a massive deportation force?” Brzezinski asked.

Trump added that he will also build “a real wall” along the U.S.-Mexico border to keep undocumented immigrants from entering the country in the future.

Beltway media villagers like the Morning Joe crew on MSNBC let Trump spew this hatred without pressing him on what he is actually saying in practical terms.

Trump will create a “deportation force” that will round up anyone without proper documentation, and load them onto cattle cars and deport them back to their country of origin without any due process of law. Does anyone believe that he will make an exception for the children of undocumented immigrants born in the U.S. who are U.S. citizens? Hell no!

“The Donald” is invoking disgraced and recalled former Arizona state senator Russell Pearce when he says that he will model his deportation plan on a program from the 1950s known as “Operation Wetback.” Donald Trump Wants to Model His Immigration Plan After Something Called “Operation Wetback”:

At Tuesday night’s debate . . . Trump invoked historical precedent: “Let me just tell you that Dwight Eisenhower. Good president. Great president. People liked him. I liked him. I Like Ike, right? The expression, ‘I like Ike.’ Moved 1.5 million illegal immigrants out of this country. Moved them just beyond the border, they came back. Moved them again beyond the border, they came back. Didn’t like it. Moved ’em waaaay south, they never came back. Dwight Eisenhower. You don’t get nicer, you don’t get friendlier. They moved 1.5 million people out. We have no choice. We. Have. No. Choice.”

The Eisenhower program Trump was referring to, if not by name, was called “Operation Wetback.” Implemented by President Eisenhower in the 1950s, the program was frighteningly simple: round up undocumented immigrants and drop them off in Mexico by the busload. The more obscure the location, the better. Dozens of the operation’s deportees died. The program was initiated by then-Attorney General Herbert Brownell Jr., who ordered his officers to shoot “wetbacks” trying to enter America. Ultimately, it wasn’t even as successful as Trump claims: Some researchers consider the 1.5 million-deported figure to be highly exaggerated.

As E.J. Montini of the Arizona Republic noted, “Operation Wetback” was the conceptual force behind nativist and racist Arizona Sen. Rusell Pearce’s anti-immigrant legislation in the past decade. Republican debate winner is – Russell Pearce?:

Way back when the campaign began – and it really feels like a long, long time ago – I wrote about how Donald Trump was stealing a page from Pearce’s anti-immigrant, border-paranoia playbook.

Nearly 10 years ago I visited Pearce at the office he then had at the state House of Representatives and he spoke of his affection for a cruel, questionably effective mass deportation program nicknamed “Operation Wetback” that was instituted by President Dwight Eisenhower in the 1950s.

Pearce was effusive about the program. He maintained that enthusiasm all through his time in the legislature, leading to his spearheading the passage of Arizona’s notorious anti-immigrant SB 1070.

A few months ago, I suggested that maybe Trump should select Pearce as his vice presidential running mate since his immigration strategy is based on Pearce’s.

Pearce wrote a long response to The Arizona Republic that read in part, “Donald Trump leads in the polls for a very good reason, he is taking up the banner of the rule of law, while other politicians are good at drive-by political statements. No more ‘build the darn fence’ to get elected and then joining the Amnesty Gang in the Senate.”

This nativist, racist view is not limited to this disgraced former state senator.

Republicans and independents who lean to the GOP say Trump is the presidential candidate who can best handle the immigration issue in a new Economist Group/YouGov Poll. The Trump Way on Immigration Suits Republicans, Poll Shows:

A whopping 49 percent of Republicans and independents who lean to the GOP say Trump is the presidential candidate who can best handle the issue — well ahead of Marco Rubio with 10 percent GOP support, Ted Cruz with 7 percent and Jeb Bush at 5 percent. 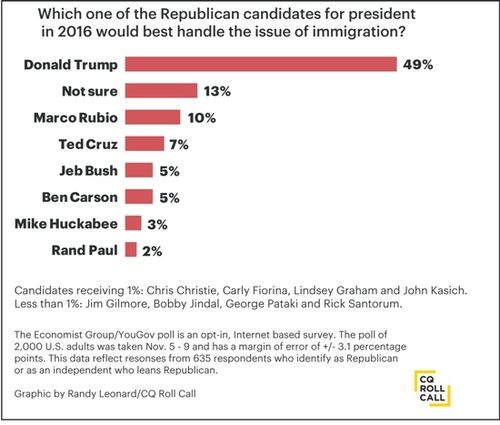 Trump’s plan to end so-called birthright citizenship and send all unauthorized immigrants back to their home countries helped propel him to the top of polls this summer.  Rubio and Bush both support a path to legal status for undocumented immigrants who undergo a background check, learn English and pay fees or taxes.

In another sign of GOP support for Trump’s strict immigration policies, more poll respondents reacted favorably to a comment by the real-estate mogul.

Sixty-five percent of Republicans and the independents who lean that way agreed with this statement: “When Mexico sends its people, they’re not sending their best. They’re sending people that have lots of problems. They’re bringing drugs. They’re bringing crime. They’re rapists.” Trump said that in June, but poll respondents weren’t told who said it.

By contrast, 77 percent of Republicans disagree with this comment: “Yes, illegal immigrants broke the law, but it’s not a felony. It’s an act of love; it’s an act of commitment to your family.” Poll respondents weren’t told that Bush said the comment in April. The overall sample of the Economist Group/YouGov poll was 2,000 adults and has a margin of error of plus or minus 3.1 percentage points. Data reflect responses from 633 – 635 Republicans and independents who lean Republican. CQ Roll Call is part of The Economist Group.