My brother has for years engaged in a game of mocking the stupidity of people every hurricane season by throwing out “Why don’t they just blow out the hurricane by nuking it?,” and then sitting back with a shitty grin on his face as people actually seriously debate the possibility. Fun times.

So when I read the news yesterday, I almost spit out my morning coffee. OMG! Did my brother just punk Donald Trump? Scoop: Trump suggested nuking hurricanes to stop them from hitting U.S.:

President Trump has suggested multiple times to senior Homeland Security and national security officials that they explore using nuclear bombs to stop hurricanes from hitting the United States, according to sources who have heard the president’s private remarks and been briefed on a National Security Council memorandum that recorded those comments.

During one hurricane briefing at the White House, Trump said, “I got it. I got it. Why don’t we nuke them?” according to one source who was there. “They start forming off the coast of Africa, as they’re moving across the Atlantic, we drop a bomb inside the eye of the hurricane and it disrupts it. Why can’t we do that?” the source added, paraphrasing the president’s remarks.

The briefer “was knocked back on his heels,” the source in the room added. “You could hear a gnat fart in that meeting. People were astonished. After the meeting ended, we thought, ‘What the f—? What do we do with this?'” 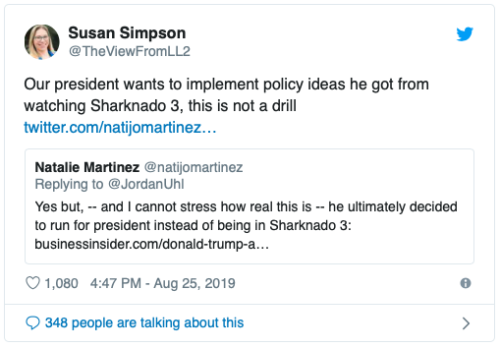 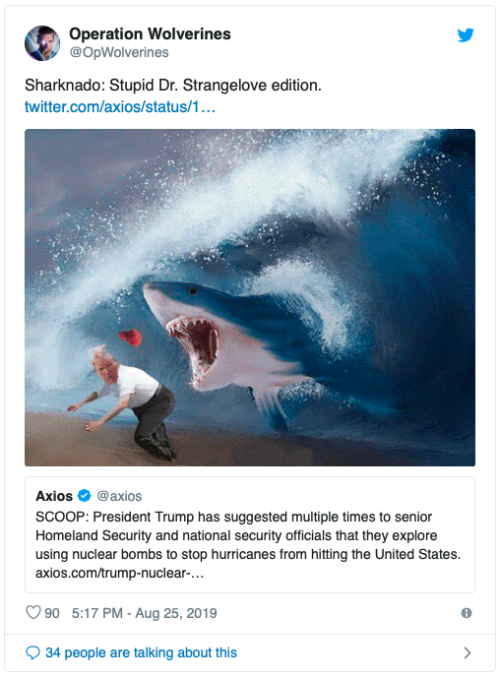 The Hollywood Reporter notes that prior to becoming president of the United States, Donald Trump had signed on to play the president . . . in Sharknado 3: Oh Hell No.

According to David Latt, the co-founder of Sharknado production company The Asylum, Trump said yes to playing the president almost immediately after The Asylum made the offer. “He was thrilled to be asked,” Latt tells T.H.R.

Talks progressed as far as drawing up a contract, sent to Trump attorney Michael D. Cohen, before the Sharknado team were faced with sudden silence. Donald Trump threatened to sue Sharknado when they didn’t cast him as the president:

The reason? “Donald’s thinking about making a legitimate run for the presidency, so we’ll get back to you,” Latt recalled Cohen saying. “This might not be the best time.”

With time running out for the production team, Mark Cuban was instead offered the role, which prompted rather furious response. “Then we immediately heard from Trump’s lawyer,” recalled Latt. “He basically said, ‘How dare you? Donald wanted to do this. We’re going to sue you! We’re going to shut the entire show down!'”

“I took it personally, but I get it now,” he added. “That was my moment of doing business with Donald Trump. And that’s Sharknado.”

This is the world we live in now.

Back to the science of nuking hurricanes:

“For the record, while small incendiary explosives may be effective against sharknadoes, nuclear weapons CANNOT snuff out the much larger hurricanes,” Thunder Levin, who wrote the first four “Sharknado” movies, told HuffPost. “They just make radioactive hurricanes, and red or blue, I’m sure we can all agree that would be worse.”

An article by Live Science from 2012 seems to support Levin’s assessment:

There’s also the possibility that bombing the hurricane, if it had any effect at all, would just add to the storm’s heat supply, making it even stronger.

The idea of nuking storms has actually been around since the Eisenhower era, according to Axios, and has come up enough over the years that the National Oceanic and Atmospheric Administration published an FAQ page denouncing it.

And to think that our national nightmare might have been avoided if only Donald Trump had played the president in Sharknado 3:

“The most scary thing about sharknadoes is that they seem to have foisted the Trump presidency on us,” Levin said. “Perhaps if we’d let him play the president in ‘Sharknado 3,’ instead of the far superior and more believable Cuban, he would have gotten it out of his system and we wouldn’t have to deal with him playing the president now. Since I was one of the strongest opponents to him getting the role — I simply didn’t think he’d be believable — I feel I must apologize to the world.”

Damn straight, Dude! It’s all on you.