‘Economically forgotten’ have much in common with America’s poor

Home/Civil & Human Rights, COVID-19 & Healthcare, Immigration/‘Economically forgotten’ have much in common with America’s poor
Previous Next

‘Economically forgotten’ have much in common with America’s poor

Axios.com has an Exclusive: 40% in U.S. can’t afford middle-class basics: 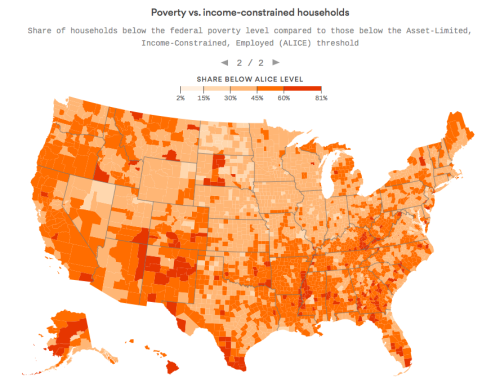 At a time of rock-bottom joblessness, high corporate profits and a booming stock market, more than 40% of U.S. households cannot pay the basics of a middle-class lifestyle — rent, transportation, child care and a cellphone, according to a new study.

Quick take: The study, conducted by United Way, found a wide band of working U.S. households that live above the official poverty line, but below the cost of paying ordinary expenses. Based on 2016 data, there were 34.7 million households in that group — double the 16.1 million that are in actual poverty, project director Stephanie Hoopes tells Axios.

Why it matters: For two years, U.S. politics has been dominated by the anger and resentment of a self-identified “forgotten” class, some left behind economically and others threatened by changes to their way of life.

When you add them together with the people living in poverty, you get 51 million households. “It’s a magnitude of financial hardship that we haven’t been able to capture until now,” Hoopes said.

By the numbers: Using 2016 data collected from the states, the study found that North Dakota has the smallest population between poverty and middle class, at 32% of its households. The largest is 49%, in California, Hawaii and New Mexico. “49% is shocking. 32% is also shocking,” Hoopes said.

Unlike the original Poor People’s Campaign headed up (in the days soon after Martin Luther King Jr.’s assassination) by Ralph David Abernathy, its revival a half-century later is by design not focused on Washington, D.C. As co-organizer Reverend William Barber II (already famed for the Moral Mondays movement he led in North Carolina) told the Los Angeles Times last week, a truly national movement is needed to reverse the many measures against poor people that have intensified in the last several years:

And so the new campaign is focused as much on 39 state capitals where its protests have already been organized as on anything in Washington. But to get the ball rolling Barber and his co-chair, Reverend Liz Theoharis, led a protest near the U.S. Capitol which, predictably, got them and others arrested for not moving away from the adjoining streets. According to an emailed news release from the Poor People’s Campaign:

In addition to the protest at the U.S. Capitol, poor people, clergy and advocates are waging nonviolent protests Monday at state capitols from Raleigh, North Carolina, to Jefferson City, Missouri, to Sacramento, California—an unprecedented wave of civil disobedience aimed at transforming the nation’s political, economic and moral structures.

All told, over a thousand protesters were arrested, according to the Campaign. It begins a 40-day cycle in which participants hold weekly mass meetings on Sundays, “direct action” protests on Mondays, and educational “teach-ins” — another ‘60s institution — on Tuesdays.

But the campaign will indeed focus on Washington after the 40 days of protests conclude — with a big event on June 23.

The Poor People’s Campaign’s list of demands is as broad and inclusive as those King and his colleagues advanced in 1968, and then some, ranging from living wages and universal access to health care, the right to vote without harassment, clean drinking water, family-friendly immigration policies and reduced military spending, to an end to mass incarceration and even an expanded definition of poverty to include people struggling to get by. Like the Moral Mondays Movement, this initiative insists on solidarity with LGBTQ folk and directly attacks the religious and moral credentials of the Christian Right.

It’s likely that over the next 40 days and beyond the Poor People’s Campaign will drift in and out of the local and national news. But it will insist on its perspective being heard and seen on the political issues of the day, and will try to act as a burr under the saddle of those in both political parties who would ride right past the most urgent economic and social needs of their country in order to appeal to comfortable donors and voters. A lot has changed for the better in America since 1968, but not enough, and certainly not right now.

Here is a brief interview of the Reverend William Barber II with Joy Reid of MSNBC. Reid’s into is a history of the original Poor People’s Campaign. 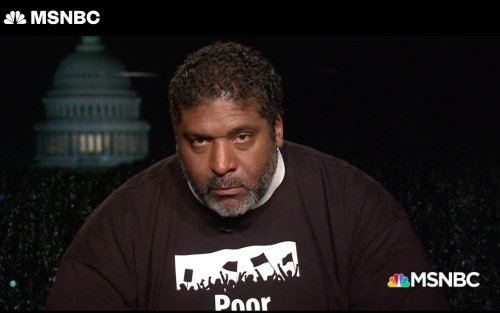