It has been quite an eventful legislative session already for everyone’s favorite misogynist grifter state legislator, Eddie Farnsworth. He made national news last week when a hearing he was chairing devolved into chaos because of his poor leadership. After activist Hugo Polanco of Living United for Change in Arizona (LUCHA) opposed a proposed constitutional amendment banning “sanctuary cities” by calling it “a return to the racism, divisiveness, and hate of SB1070,” (which it is), Farnsworth cut him off and warned not to use “vitriolic” language like “racist.”

When Polanco continued to accurately describe the bill as racist, Farnsworth suspended the hearing and had the activists from LUCHA and other groups removed. Because there is no better way to combat charges of racism than calling the cops on brown people you don’t like. 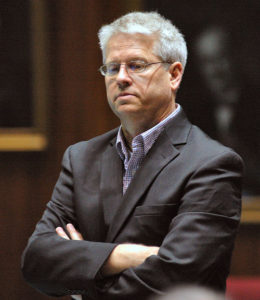 Eddie Farnsworth has a history of blocking bills which would hold rapists and abusers accountable.

But while Eddie may not think people of color who disagree with him have a right to speak, or that women deserve equal rights in the US Constitution, there is one group whose rights he is always ready to defend: rapists and sexual abusers. And no, I’m not talking about the tolerance for abusers and sexual harassers like David Stringer, Don Shooter, and Michelle Ugenti-Rita in the Republican caucus. Or his membership in a church that lied to survivors of sexual abuse to protect themselves from lawsuits. Or his role in making sure the charter school industry he personally profits from remains lightly regulated, limiting oversight of sexually abusive teachers and administrators and preventing recourse for victims. And I’m not even talking about the nephew which his powerful family protected for years until he raped a 12-year-old girl.

No, I’m talking about his history of blocking bills which would hold rapists and abusers accountable. Last year, he held up the state budget for weeks in a standoff with fellow Republicans Paul Boyer and Heather Carter over a bill which would have extended the statute of limitations for victims of childhood sex abuse. After Boyer and Carter finally got their bill passed, Farnsworth took the mic on the floor for a Brett Kavanaugh-esque hissy fit in which he compared the bill to “lynching.” And now he’s at it again.

On Thursday, Senator Victoria Steele posted a pained note on Twitter saying that she had withdrawn a bill she sponsored, SB1355, giving rape victims the ability to sever parental rights for their rapists. The bill would strengthen an existing law that allows parental rights to be severed only in the case of a criminal conviction for rape. Since only an estimated 1% of rapes actually result in a criminal conviction, Steele’s bill would allow a rape victim to go to a civil court and present “clear and convincing evidence” to sever parental rights.

It seems like a no-brainer, right? Oh, but not for our boy Eddie. As Steele recounted to the Phoenix New Times, the bill seemed sailing toward passage until Farnsworth requested an exception for marital rape:

“‘I don’t think someone who’s been married, and has children, should be able to cry rape,'” Steele claims Farnsworth said. “‘I would want an amendment… Not only do I want an amendment, I’m not gonna run it, you are, because I’ll just get attacked. You have to amend your own bill to take married people out.'”

This quote is just vintage Farnsworth, not only making a wildly offensive claim that anyone who is married waives their right not to be raped but trying to hide behind his female colleague to avoid responsibility for it.

And as the Arizona Mirror reported on Friday, this is not even the first time Farnsworth has expressed a belief that marital rape is not a real thing. In 2005, he fought an attempt to strengthen Arizona’s marital rape law. As quoted in a Phoenix Magazine story, he said, “Some would argue there are conjugal rights that exist within a marriage.”

Yes Eddie, some people might argue that. But luckily most of those people are dead now. It is true, for most of our country’s history, our legal system did not recognize spousal rape as a crime. But of course, for most of that time, women were not considered equal partners in a marriage and were considered the property of their husbands. The feminist revolution of the 1960s and 1970s did away with many of these attitudes, reconceiving of marriage as an equal partnership.

And starting in the 70s, laws began to change to reflect the idea marriage does not automatically equal consent at all times. The 1978 case of Oregon v. Rideout, in which a man was acquitted for raping his wife because they still lived together, was a catalyst for many states changing their laws, though, shamefully, it took until 1993 for all states to recognize marital rape as a crime.

Today, all decent people who understand the basics of sexual consent should understand that marital rape is rape. But of course, it unfortunately still happens and is common in abusive relationships. Between 10-14% of married women will be raped by their spouse at some point in their marriage and it is one of the most severely unerreported types of rape. And nearly half of women in abusive relationships will be raped by their partner.

Now, the only “some” people who would argue that being married gives someone the right to ignore their partner’s consent are rapists and misogynistic rape apologists like Eddie Farnsworth. Farnsworth’s repulsive idea that marital rape is not rape is a disgusting throwback rooted in the concept that wives are fundamentally the property of their husbands and, consequently, women are not the equals of men. No wonder he hates the Equal Rights Amendment so much.

Farnsworth is a Stain

Eddie is not running for another term in the legislature this fall, apparently preferring to kick back with his charter school millions or, if certain chatter is correct, prepare for higher office down the road, especially if Arizona gets its anticipated new congressional seat next year. But wherever he goes, the stain Farnsworth has left on the legislature will linger long after he is gone. The pain he has caused so many communities in this state is in many ways irreparable. This is something I know after speaking to a survivor of intimate partner sexual violence who had worked on SB1355 and was called at 9:15pm on Wednesday, February 19 to be told she would no longer be testifying the following morning because of Farnsworth. She and other survivors who worked on moving this bill forward are beside themselves and how can you blame them?

Along with his good friends like Russell Pearce and Andy Biggs, Farnsworth is largely responsible for Arizona’s national reputation as an intolerant backwater full of angry, puffy white men with bad haircuts. He has stood athwart a changing Arizona for years trying to yell “Stop” and has often succeeded. But times are changing. The same day Farnsworth tried to secretly stand up for rapists and hide behind his female colleague while doing it, he and his Republican colleagues waived a white flag on the “sanctuary city” bill following the national embarrassment caused by Farnsworth’s racism and unprofessionalism. He and his vile ideas will keep losing in the future, but even after he is gone, we cannot forget the damage he did.

About the Author: David Boyles

David Boyles is an English instructor at Arizona State University and the Voter Registration and Polls Chair for the Arizona Democrats of Legislative District 18. He is also the research coordinator for White Hat Research & Policy Group and a co-founder of Drag Story Hour - Arizona, and is a past board member of NARAL Pro-Choice Arizona and the Abortion Fund of Arizona. He primarily works on issues related to education, voting rights, and gender and LGBTQ equality.