So this actually happened. Marco Gutierrez, founder of the group Latinos for Trump, issued a dire warning to the United States in an interview with Joy Reid on MSNBC on Thursday night, ‘Taco Trucks on Every Corner’: Trump Supporter’s Anti-Immigration Warning:

“My culture is a very dominant culture, and it’s imposing and it’s causing problems. If you don’t do something about it, you’re going to have taco trucks on every corner.”

Mr. Gutierrez’s comments elicited a largely sarcastic backlash on social media. #TacosOnEveryCorner surged to the top of Twitter’s list of trending topics, where it remained on Friday morning. 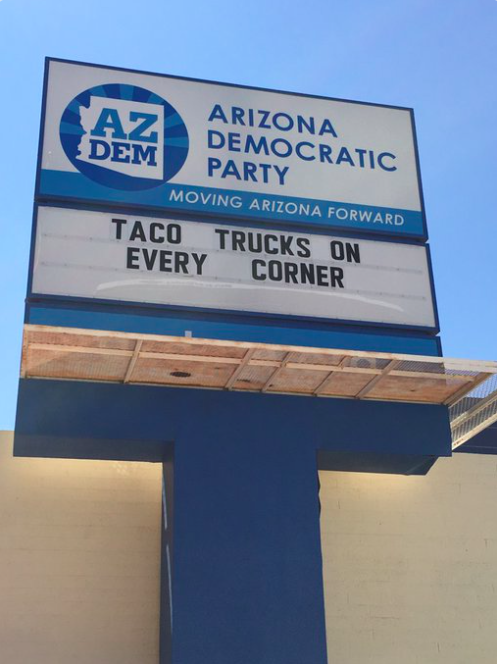 Hundreds of tweets with the hashtag “taco trucks on every corner” popped up Friday on Twitter, most of them from people salivating for the tortilla-wrapped food.

The social media onslaught was in reaction to a Thursday night interview on MSNBC with Latinos for Trump founder Marco Gutierrez, who said the Mexican culture is “dominant” and “imposing” before issuing his taco warning.

The opportunity to poke fun at Gutierrez’s remarks was too hard for many to pass up. Celebrities such as actors Patton Oswalt and Eva Longoria Baston jokingly referenced the hashtag in tweets. Various memes with statements such as “Election day is now officially Taco Tuesday” were also circulating.

Some groups drove the taco-truck comment further with real trucks.

The Arizona Democratic Party put the phrase up on the marquee of its building in mid-town Phoenix. Party officials also said there would be a taco truck on the property Saturday.

With several predominantly Latino neighborhoods, Phoenix is a city used to seeing taco trucks on the corner. In the wake of Gutierrez’s comments, Arizona Congressman Ruben Gallego decided to patronize one of them.

The Democrat posted a photo to his personal Twitter account of him ordering three carne asada tacos from his favorite taco truck for lunch Friday. The picture was accompanied by the tweet “about to assert my cultural dominance.” It has garnered hundreds of likes.

“I was just trying to bring some levity to it,” Gallego said. “Good food is good food and it will unite people whether they are Democrats or Republicans.” 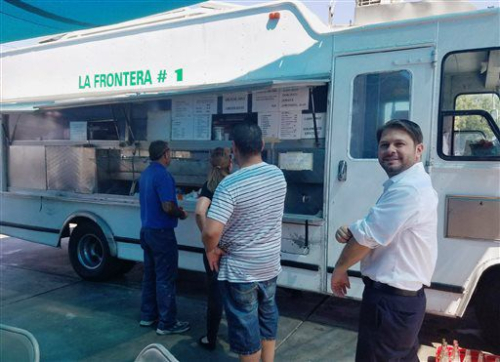 Latinos for Trump? Seriously, Dude? Greg Sargent reports, If this new poll is right, Trump is absolutely shredding the GOP brand with Latinos:

A new poll of over 3,000 Latino voters just released  . . . by America’s Voice and conducted by Latino Decisions, finds Hillary Clinton leading Donald Trump by 70-19 among Latinos. That’s worse than Mitt Romney’s 27 percent in 2012.

But buried in the crosstabs are these findings that suggest Trump may also be damaging the GOP’s image among them pretty badly:

* 68 percent of Latinos say Trump’s views about immigrants and immigration make them less likely to vote for Republican candidates this November — with 58 percent saying those views have made them much less likely to do that. By contrast, 64 percent of Latinos say Clinton’s views make them either much more likely (43) or somewhat more likely (21) to vote for Dem candidates.

* 63 percent of Latinos say Trump’s opposition to Obama’s executive deportation relief for DREAMers (Deferred Action for Childhood Arrivals) makes them less likely to vote for GOP candidates, with 53 percent saying they are much less likely.

* Latinos say they’ll vote for Democrats on the generic ballot by 60-14.

There is also some evidence that Trump may be galvanizing Latinos to turn out. Seventy six percent of Latinos say it’s more important to vote this year than it was in 2012, and of that group, a bare majority say this is because of the need to resist Trump and his views.

Of note: “all of the new polling was conducted before Trump gave his immigration speech, at a time when the media coverage reflected hints that he might soften his position, and before prominent conservative Latinos backing Trump announced they were pulling their support in response.”