You may recall that that back in July “Dear Leader” Donald Trump at one of his Nuremberg-style campaign rallies in Great Falls, Montana Offered $1 Million For “Pocahontas” Elizabeth Warren To Take DNA Test To Prove Indian Ancestry. Here’s the video evidence (Trump has repeated this racist shtick with equal vigor as his racist Obama “birther” conspiracy theory). 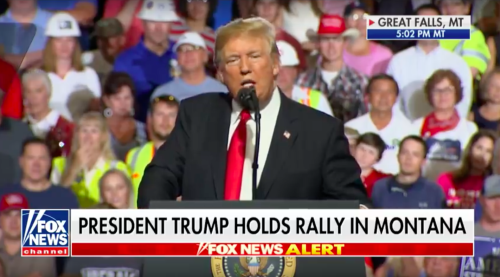 It was just a few months ago when Donald Trump presented a new idea about how he’ll attack Sen. Elizabeth Warren (D-Mass.), whose Native American ancestry has long been a point of preoccupation for the president. Imagining a 2020 debate, Trump told an audience of supporters about his future plan.

“I’m going to get one of those little [DNA testing] kits and in the middle of the debate, when she proclaims she’s of Indian heritage…,” Trump said. “And we will say, ‘I will give you a million dollars, paid for by Trump, to your favorite charity, if you take the test and it shows you’re an Indian.’ And we’ll see what she does. I have a feeling she will say no, but we will hold it for the debates.”

The president may need to track down his checkbook. The Boston Globe  reported overnight:

Senator Elizabeth Warren has released a DNA test that provides “strong evidence” she had a Native American in her family tree dating back 6 to 10 generations, an unprecedented move by one of the top possible contenders for the 2020 Democratic nomination for president.

Warren, whose claims to Native American blood have been mocked by President Trump and other Republicans, provided the test results to the Globe on Sunday in an effort to defuse questions about her ancestry that have persisted for years. She planned an elaborate rollout Monday of the results as she aimed for widespread attention.

As the Globe  reported, the analysis was conducted by Stanford University’s Carlos Bustamante, a renowned scholar and expert in the field, who concluded that the results “strongly support the existence of an unadmixed Native American ancestor.”

The article added, “Bustamante calculated that Warren’s pure Native American ancestor appears in her family tree ‘in the range of 6-10 generations ago.’ That timing fits Warren’s family lore, passed down during her Oklahoma upbringing, that her great-great-great-grandmother, O.C. Sarah Smith, was at least partially Native American.”

In other words, Trump assumed Warren was lying about her ethnicity. She wasn’t.

All of this is notable for a few reasons.

First, the president’s interest in the senator’s family background has at times been a little creepy. As recently as last week, Trump said at a rally in Iowa that he’s eager to “finally get down to the fact as to whether or not she has Indian blood.” I’ll resist the urge to speculate as to why he considered this so important, but whatever the rationale, the question has apparently been answered.

Second, I’ve seen some Warren critics, including the president, suggest the “controversy,” such as it is, has less to do with racism and more to do with Warren exploiting her ethnicity to advance her career through affirmative action. This line of argument was already debunked; today’s revelations go further in slamming the door shut.

Third, Warren, who’s very likely to run for president, appears to see this as an early opportunity to set the record straight once and for all. Rather than having a racially-charged conspiracy theory hanging over her head, the Democratic senator is trying to turn the tables, capitalizing on the fact that she was telling the truth. Indeed, Warren has already challenged the president to send his $1 million check to the National Indigenous Women’s Resource Center.

Not going to happen. Trump has a history of not paying up for things which he promised to pay. Four months after fundraiser, Trump says he gave $1 million to veterans group.

As Steve Benen follows up, Reversing course, Trump pretends not to care about Warren’s DNA test:

Trump’s preoccupation with Sen. Elizabeth Warren’s (D-Mass.) ancestry has been kind of creepy for quite a while. He’s brought it up in interviews, speeches, and as of this morning, a dozen tweets.

This morning, however, we learned the results of the senator’s DNA test, which “strongly support the existence of an unadmixed Native American ancestor.” Warren’s claim, based on family lore, was true.

If you’re curious what Trump’s reaction to the news might be, you’re not alone. Here was the brief exchange with reporters on the White House South Lawn this morning:

Q: Mr. President, your reaction to Sen. Elizabeth Warren releasing the results of her DNA test?

TRUMP: I didn’t say that. I didn’t, you better read it again.

First, “Who cares?” is a hilarious response because no one has cared more about the issue than the president.

And second, if Trump wants us to read the transcript again, I’m game.

“I’m going to get one of those little kits and in the middle of the debate when she proclaims that she’s of Indian heritage because her mother says she has high cheekbones. That’s her only evidence, that her mother said she had high cheekbones. We will take that little kit and say, but we have to do it gently. Because we’re in the me-too generation so I have to be very gentle. And we will very gently take that kit and we will slowly toss it, hoping it doesn’t hit her and injure her arm even though it only weighs probably two ounces.

“And we will say, I will give you a million dollars to your favorite charity, paid for by Trump, if you take the test so that it shows you’re an Indian. You know. And let’s see what she does. I have a feeling she will say no.”

The video evidence is at the top of this post.

The vile racist-in-chief was bested by “Pocahontas” and he now is reneging on his offer to pay $1 million dollars to her favorite charity, while denying he ever said it.

Later in the day, the president was in Georgia for a briefing on the damage done by Hurricane Michael, and during a Q&A with reporters, Trump insisted that Warren “owes the country an apology.” He didn’t say why, and I haven’t the foggiest idea what he was talking about.

Trump said later Monday he would only pay the $1 million “if I can test her personally. That will not be something I would enjoy doing, either.”

Perhaps the president is unclear about what a DNA test is. What, exactly, does he want to do “personally” that he would find unpleasant? Does Trump envision a process in which he draws blood from the senator and begins a detailed examination of genetic history?

Or is this some kind of attempt to question Stanford University’s Carlos Bustamante, a renowned scholar and expert in the field, who did the research on Warren?

She tweeted that the president makes “creepy physical threats” about women who scare him, including her.

“He’s trying to do what he always does to women who scare him: call us names, attack us personally, shrink us down to feel better about himself,” the Massachusetts Democrat responded on Twitter on Monday after Trump made the comment during an appearance in Georgia. “It may soothe his ego – but it won’t work.”

“A DNA test is useless to determine tribal citizenship. Current DNA tests do not even distinguish whether a person’s ancestors were indigenous to North or South America,” Cherokee Nation Secretary of State Chuck Hoskin Jr. said. “Sovereign tribal nations set their own legal requirements for citizenship, and while DNA tests can be used to determine lineage, such as paternity to an individual, it is not evidence for tribal affiliation. Using a DNA test to lay claim to any connection to the Cherokee Nation or any tribal nation, even vaguely, is inappropriate and wrong. It makes a mockery out of DNA tests and its legitimate uses while also dishonoring legitimate tribal governments and their citizens, whose ancestors are well documented and whose heritage is proven. Senator Warren is undermining tribal interests with her continued claims of tribal heritage.”

Naturally, the racist-in-chief who has denigrated Native Americans for years (because “Indian casinos” directly competed with his failed casinos), latched onto this statement. What a total asshole. Not just a racist, but a misogynist as well.