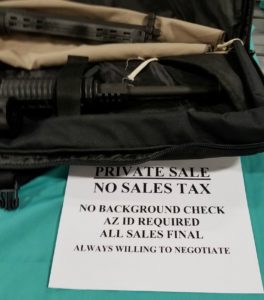 Like an arms bazaar in Syria, there’s no background check for guns bought from private sellers at the gun show.

This op-ed article is reprinted from the Arizona Daily Star, November 2, 2019, page A6

The Crossroads Gun Show will return to the Pima County Fairgrounds on Nov. 2-3. For a fee, unlicensed gun sellers can rent a table and sell AR-15s, AK-47s and other guns into our community without conducting a background check.

In contrast, federally licensed dealers must conduct a background check before selling a weapon – but not the gun merchant at the next table, who will have a sign saying “Private sale. No background checks.”

Research reveals that gun shows provide easy and abundant access to firearms where felons, domestic abusers, people with severe mental illness and those who have failed a background check can anonymously purchase weapons.

This is known as the gun show loophole: If you can’t pass a background check in a gun shop, all you need is a driver’s license that says you are 18 or older.

This loophole is a clear and present danger to residents of Tucson.

At a time when students and parents are protesting gun violence, it is wildly wrong that the Pima County Supervisors allow public property to be used to flood our streets with guns. 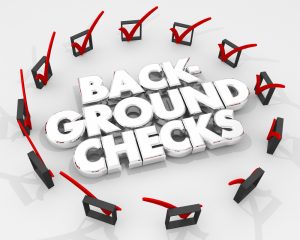 Furthermore, the Bureau of Alcohol, Tobacco and Firearms, or ATF, estimates that on average 2,500 to 5,000 gun shows are held annually — and that 25% to 50% of sellers are not licensed dealers. The ATF concluded that gun shows are a “major trafficking channel,” associated with approximately 26,000 firearms diverted from legal to illegal commerce, according to an ATF report in 2000. (Thanks to NRA lobbying, our government is prohibited from collecting more recent data.)

The County Fairgrounds are managed by Southwestern Fair Commission Inc., a nonprofit private corporation established by Pima County to operate the fairgrounds.

Regrettably, recent state law (ARS Sec. 13-3108) prohibits the county from imposing background-check requirements. The Giffords Center gives Arizona an “F” rating for gun safety because it has the weakest laws in the country.

The House of Representatives passed HR 820 to require criminal background checks on all firearms transactions occurring at gun shows — but the bill is unlikely to get a hearing in the US Senate. Other elected officials, notably state Rep. Randy Friese of Tucson, has repeatedly proposed gun safety legislation, but the legislative leaders have refused to give them a hearing.

It’s time to think nationally and act locally. In the face of this, the Pima County Supervisors must take a stand in favor of public safety for our local community and call on the state legislature to close the gun show loophole.

Otherwise the Pima County Supervisors have blood on their hands.

For more information, visit Citizens for a Safer Pima County on Facebook at https://www.facebook.com/CitizensSaferPima/