Home/Civil & Human Rights, Courts & Law/Evil GOP bastards are trying to negate the AIRC so the legislature does redistricting maps again
Previous Next

SCR 1034 (.pdf), sponsored by Senator Yarbrough, would alter sections of the citizens initiative that established the Arizona Independent Redistricting Commission. 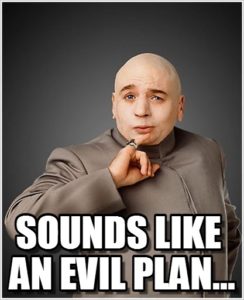 Among the changes are an increase in the number of Commissioners to eight, selected directly by legislative leaders rather than the Commission on Appellate Court Appointments, which would lead to partisan gridlock because it also requires a supermajority vote of the AIRC to adopt a map (unlikely), which would then allow the legislature to refer its own alternate maps to the ballot (by simple majority vote), and if approved by the voters, would supersede the maps drawn by the Commission. Thus the legislature is back in the redistricting business again! Bwahahaha!

Critics warn that a plan to alter the membership of a commission responsible for drawing Arizona’s congressional and legislative district maps is designed to fail.

Senate President Steve Yarbrough conceded that by increasing the number of members on the Independent Redistricting Commission from five to eight, it’s likely that the commission would face gridlock.

“That is indeed going to create a probable 4-4 (vote) by my own estimation, but that is by design,” the Chandler Republican told the Senate Government Committee, which approved the resolution on a 4-3 partisan vote Wednesday.

Requiring a supermajority to approve maps during redistricting, a highly-contentious process that creates district maps that will be used for the next decade, will require commissioners to find true bipartisan consensus, Yarbrough said.

“I want the most bipartisan and fair process that we can design,” he said.

This is a bald-faced lie. Keep reading for the true reason.

“If that’s his goal, he’s designed the exact wrong system to accomplish it,” Edman told the Arizona Capitol Times.

Currently, commissioners are chosen from a pool of 25 candidates vetted by the Commission on Appellate Court Appointments. Republican and Democratic legislative leaders get to choose two commissioners each from the pool.

Those four commissioners must then select a fifth candidate, typically an independent or anyone who’s neither a Republican or Democrat, to serve as chair of the IRC.

The current system is too easily “gamed” by one party, as Republicans and Democrats seek to install an IRC chair that will vote in their favor, Yarbrough said.

“That person effectively becomes the redistricting czar,” he said. “They control the process.”

As Yarbrough acknowledged, Democrats and Republicans would still choose independents who would be the most likely to serve their own interests. But that will force the IRC to reach amicable solutions, not settle for a tie, he said.

“That sets it up for gridlock,” Edman said. “To me, it’s set up to make the system fail, and to go back to politicians drawing their own lines.”

That’s exactly why voters approved Proposition 106 in 2000.  It took redistricting responsibilities away from the Legislature, unlike most states where state lawmakers are responsible for drawing maps that will determine the composition of districts they’ll campaign in for years. The Independent Redistricting Commission was designed to keep partisan legislators out of the redistricting process, said Rivko Knox of the Arizona League of Women Voters, and Yarbrough’s resolution would let them right back in.

The resolution would give the Legislature a chance to draw district maps to compete with the IRC’s, which the Legislature could refer to the voters. That vote would need to occur in between the 2020 and the 2022 General Elections.

If approved, those maps would render the IRC moot. The Legislature’s alternate redistricting plan would trump anything prepared by the IRC, so long as voters approve it.

Maps drawn by state legislators are often challenged in court. In recent weeks, the Pennsylvania Supreme Court released a ruling that the state’s Republican-drawn congressional districts were drawn to gerrymander districts in the GOP’s favor [in violation of the Pennsylvania Constitution].

Republicans on the Government Committee touted the addition of a second “independent” voter on the commission [selected by legislative leaders], which Sen. John Kavanagh, R-Fountain Hills, said would better represent the proportion of the state’s registered voters who don’t side with a political party.

The resolution would also call for legislative districts to be drawn so that the population of the largest district doesn’t exceed the smallest district by more than 2 percent. Current districts vary much more wildly, which Kavanagh said creates districts that are overwhelmingly dominated by one of the top two political parties.

For that reason alone, Kavanagh said he was “appalled” that the League of Women Voters and Arizona Advocacy Network opposed the resolution.

Edman said that efforts to make district populations more even are a great idea, so long as the maps comply with the Voting Rights Act.

Arizona is no longer subject to Section 5 preclearance of the Voting Rights Act by the voting rights section of the Department of Justice thanks to a 5-4 partisan decision of the U.S. Supreme Court in Shelby County v Holder (2013).  The Supreme Court is expected to announce a controversial decision on partisan gerrymandering later this year in cases from Wisconsin and Maryland.

But there’s also many more reasons to oppose the resolution, he said.

Before any of Yarbrough’s proposals take effect, Arizona voters would have to approve Yarbrough’s proposed changes to the IRC — if the resolution advances out of the Senate and House, it’ll be put on the ballot in November.

This is because the changes Yarbrough proposes are not consistent with and in furtherance of the goals of the citizens initiative that created the AIRC, and thus violates the Voter Protection Act.

Edman suspects it’s a question that isn’t worth asking — voters are likely to reject changes that would make redistricting more partisan again.

Or, thanks to political polarization and the rise of GOP authoritarianism, GOP voters would vote for a measure that gives them permanent control of the state legislature out of GOP tribalism, and there are more GOP voters than Democrats. “Independents” are actually “leaners” who identify with one party or the other and they tend to break for the GOP in Arizona.

“The reality is that these things are hotly contested,” he said. “This is the most partisan issue that’s possible… so of course both sides are going to work as hard as they can to try and game the system, and that’s why it’s important that we have rules that are hard to game.”

This bill should be seen for what it is — a blatant power grab by the Arizona GOP — and rejected by the voters.

In other election news, yet another GOP voter suppression bill sponsored by Rep. Bob Thorpe (R-Flagstaff) was defeated in the House Federalism, Property Rights and Public Policy Committee, which Bob Thorpe chairs, by a 4-5 vote, with Republicans Noel Campbell and Travis Grantham joining their Democratic colleagues in voting to kill the bill. Oh, burn!

A House bill that would require voters to have the same address on file with the Secretary of State and the Department of Transportation or face a civil penalty failed in committee.

HB2397 would have required the person to update their address with ADOT within 10 days or register to vote using the address on file with the department. If they failed to do so, they could face a $25 fine and have their driver’s license suspended.

The measure failed in the House Federalism, Property Rights and Public Policy Committee, which sponsor Rep. Bob Thorpe chairs, by a 4-5 vote, with Republicans Noel Campbell and Travis Grantham joining their Democratic colleagues in voting to kill the bill.

But even Republicans who voted in favor of moving the bill out of committee said that if it passed, they would not support the bill without amendments.

Opponents of the bill said it was a way for the Flagstaff Republican to silence voters. Last year he sponsored legislation to ban students from using their dorm addresses to register to vote. That bill was declared likely unconstitutional by House attorneys and died without ever receiving a committee hearing.

“At AZAN, we believe registering to vote should be encouraged,” he said. “Exposing someone to potential criminal liability because they register to vote is, to state the obvious, just the opposite.”

Deputy Secretary of State Lee Miller told the committee that the agency was concerned about how the bill would affect the state’s youngest and oldest voter demographic. He said that there were also concerns about how much it would cost to implement this change.

Instead, Miller said, the agency and county recorders have a “better solution” to ensuring the voter registration rolls are accurate: by continuing to do what they are already doing.

Miller said Arizona joined at least 20 other states this year in becoming a member of the Election Resource Information Center. [I believe he means the Electronic Registration Information Center.] The nonprofit organization helps states improve the accuracy of their voter rolls by cross checking the state’s voter rolls against those of other member states and the private sector.

“They can accomplish the same thing without additional costs,” Miller said. “We think that is the best way we know how to keep the voter roll up to date.”

Democrats in the Arizona legislature have introduced HB 2052 for automatic voter registration. Because there are no GOP cosponsors, the bill has not received a hearing in committee. You’re shocked, I’m sure.