60 Minutes on Sunday aired a report on the farm bailout program meant to compensate farmers for the damage Donald Trump’s trade war with China has done to their livelihood, and that was before the coronavirus pandemic hit disrupting food supply chains around the world.

Family farmers, as opposed to the large agribusiness corporate conglomerates, have not been the beneficiaries of the farm bailout program, and these family farmers are now on the verge of bankruptcy and losing their farms, some of which have been in their family for generations.

America’s food supply is also now being threatened by the one-two punch of Donald Trump’s trade war with China and his criminally negligent mishandling of the coronavirus pandemic.

It is beyond comprehension to me that any family farmer remains loyal to Donald Trump or the Republican Party at this point. It is an act of financial suicide, and in far too many cases, actual suicide.

A video link to the report is not available, but you can view the report at 60 Minutes, which also provides a transcript (excerpted below) at this link. Where Did The Money Go? 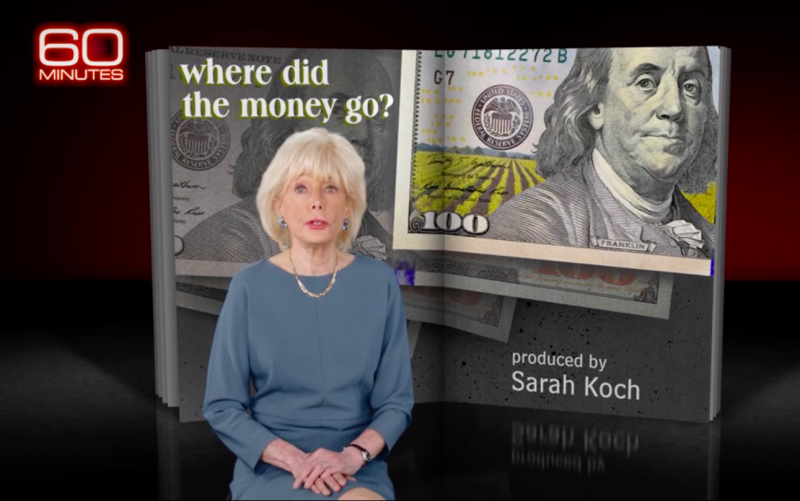 Over the coming months, the government will disburse a $19 billion bailout package for farmers hurt by the coronavirus pandemic. To understand who would benefit from this new bailout, we took a close look at another recent bailout for farmers: the $28 billion program, administered without congressional oversight over the last two years and meant to offset damages from President Trump’s trade war with China. We wanted to know, where did the money go?

As it turns out, most of it bypassed the country’s traditional small and medium-sized farms that were battered by the loss of their export market and which are now being hit with severe losses from the coronavirus pandemic.

Doug Sombke and Bob Kuylen oversee the farmers unions in North and South Dakota with more than 50,000 farmers and livestock producers. The average farm here is less than 1,500 acres.

We interviewed them remotely.

Bob Kuylen: If people are– are really wanting to jump off a building about what the stock market is doing, we’ve been doing that for three years now. We did everything right. We raised great crops. But we’re still losing our rear ends because, uh, because of what’s happening with– with—the sanctions. And now with the Coronavirus, it’s gonna be another hit, without a doubt.

Doug Sombke: So imagine three years ago, you lost 30% of your paycheck and then the next year, you lost another 30%. I mean, that’s the pain we’re feeling.

Lesley Stahl: What is happening to your farmers with this virus?

Doug Sombke: It’s just accelerating the problem. And we are, um, not being able to sell because everyone’s worried if the plants are gonna stay open.

Lesley Stahl: And restaurants closing and…

Doug Sombke: Yeah, yeah. The food is starting to back up. Uh, the freezers are getting full. Restaurants aren’t buying. So yeah, it’s really becoming a huge issue for us.

With restaurants and schools closed across the country, their markets are shrinking. It’s adding to already rising debt and farm bankruptcies aggravated by the trade war with China. They told us the bailout, called the Market Facilitation Program that began in 2018, helped them survive the last two years but didn’t come close to covering most of their members’ losses or their own.

Lesley Stahl: How did the tariffs, the sanctions affect you?

Lesley Stahl: But what about the bailouts? You had two rounds. This was supposed to tide you over.

Lesley Stahl: Did it?

Doug Sombke: Well, it made the banker happy. It didn’t do anything for me.

Bob Kuylen: Oh, yeah. I know personally families that are suffering through that. The– the stresses out there now, it’s just– they’re out there for four or five generations of their family and they’re the ones that lost the farm? What do you think that’s gonna do to their– their mind?

Doug Sombke: Yeah a lot of depression. And, just this past year in my hometown, we’ve– we’ve lost three young men to suicide. It’s– it’s just hard, Lesley, because you see these young guys coming up and, you know, and– and you’ve coached them in baseball. You– you– you have had hopes that– you’re glad they stayed in the community and then you end up seeing this happen. And, none of their fault. Not any of their fault. And it’s hard. And I worry about my kids. My– my sons are on the farm and I worry about them all the time.

After President Trump imposed the stringent tariffs in 2018, China struck back hard here in the Farm Belt — imposing its own steep tariffs, especially impacting soybeans, our largest agricultural export to China, and sending commodity prices into a freefall. The administration tapped a Depression-era fund for agriculture and provided $28 billion for farmers, almost $3 billion to purchase surpluses for food banks and other nutrition programs and more than $24 billion in direct aid to farmers.

But so far, most of the money has gone to the biggest farms – one-third of it to just 4% of them. Even farm owners who personally report nearly $1 million in income per year are eligible.

We spoke to Agriculture Secretary Sonny Perdue in March, in the early days of the pandemic before social distancing was the norm. He defended the trade war bailout and the payments to farmers that were based on the amount of crops produced in 2018; and by planted acreage in 2019.

Sonny Perdue: It’s not a welfare program. It’s not a subsidy. It’s not a price-support system. It is a market-damage system. A disruption there.

Lesley Stahl: These payments are disproportionately going to the big, wealthy farms at the expense of the smaller farms where the suffering is.

Sonny Perdue: The fact is, Lesley, most of our production in America is done by large farmers. That’s just the way it happens. These are– these are awards based on the production. And– but we did try. We’ve got payment limits that cut people off.

But the payment limits don’t always cut people off. The limit, or the cap, designed specifically for the biggest operators, used to be $125,000 per person or legal entity. But that was raised last year to $250,000.

Lesley Stahl: But why did you double the cap? The limit?

Sonny Perdue: We saw the amount of [trade war] damage that was happening here. The need was out there in order to keep these farmers where they could continue. Not be made whole, but to continue to survive to farm again the next year.

Ken Cook: They made changes for the very largest farmers. If you’re a small farmer, you don’t have to worry about the limits. You’re gonna not come close to hitting them. But large farmers, they changed it so that a husband could get $250,000. His wife could get $250,000.

Ken cook is the president of the Environmental Working Group that’s been tracking farm subsidies for decades and now the direct payments to farmers under the Trump administration’s bailout.

The USDA data Cook obtained through a search of public records show farms are actually collecting millions of dollars – way over the cap. They do it by exploiting permissive eligibility rules that the administration adopted from Congress’ farm bills. Those rules allow big farms to collect maximum payments on behalf of not just the farmer, but many others.

Lesley Stahl: So let’s say I have a cousin who’s a farmer. And I’m a reporter in New York. I sit here. I don’t do any farming. But I’m a cousin.

Lesley Stahl: I can get money?

Ken Cook: You can get money. Maybe you have to make a phone call a couple times a year to find out what–

Lesley Stahl: But I don’t have to even go there?

Ken Cook: No, you don’t have to live on the farm or visit the farm. These payments aren’t just going to farmers who are out there climbing up on a tractor every morning. These payments are going to people who are living in the middle of New York City because they happen to have an ownership interest in the farm.

Many farms today have investors – call them absentee owners – who also collect bailout money. When we checked, we found hundreds of recipients living in big cities including New York City, Miami, San Francisco. Among them, a banker, an architect, a composer, a classical musician.

Not South Dakota’s Doug Sombke’s idea of a farmer.

Lesley Stahl: But doesn’t the money come to the farm?

Doug Sombke: No, it can go anywhere. They can distribute it as the corporation sees fit, right?

Ken Cook: If you’re a very large farm operation and you’re eligible for these payments, the most important tool as a farmer is not what’s in your machine shed. It’s the lawyer you hire to set up a paper farm that’s designed to absorb as much federal money, as much Trump payment, as possible.

Lesley Stahl: And there are lawyers who are documenting these family owners?

Ken Cook: There are lawyers who specialize in helping big farms maximize their payments from the Department of Agriculture. It’s an industry in and of itself. And they do very well.

Remember this is taxpayer money. Secretary Perdue said if farmers are exploiting weak subsidy laws to get money they shouldn’t, it’s Congress’ fault.

Sonny Perdue: What I’m telling you, Lesley, is that we use the same criteria as Congress passed in the farm bill to determine who is eligible to receive money and who is not. That– that’s the facts.

Sonny Perdue: We– we are administrators of the law passed by Congress.

Lesley Stahl: But let me ask you, as the secretary of agriculture, if you think that’s a good idea. To have those– allow those partnerships to exist.

Sonny Perdue: I think, again, it really is the responsibility to Congress to determine this. From my perspective as an administrator, my job is to follow the law.

So the farmers who need the financial assistance the most are receiving the least, and the large agribusiness corporate conglomerates are raking in taxpayer money — many of them absentee owners who do not work the land — who are members of a partnership formed specifically to take advantage of Department of Agriculture subsidies and tax breaks.

The rich are getting richer, while the family farmer is losing his farm, his family’s legacy, and in some cases his own life. This is not new, it has been going on for years. I saw this firsthand during the 1980s, caused by the savings and loan crisis. I stood shoulder-to-shoulder with friends and neighbors to prevent the banker from seizing their farm, only to have to back down when the banker came back later with the county sheriff. I watched grown men cry over the shame they felt for losing their family’s farm and legacy. Some of these men never recovered from their loss. I was a pallbearer at their funeral.

This farm crisis has a different origin, caused by Donald Trump’s trade war with China and the disruption of food supply chains caused by the coronavirus pandemic. But the situation is much the same, with much more dire consequences.