The Trump “Injustice” Department went to court on Friday trying to block the release of former national security adviser John Bolton’s book next week, “The Room Where It Happened”.

In a 90-minute hearing held by videoconference in Washington, U.S. District Judge Royce C. Lamberth grilled the Justice Department over how he could prevent the sale of hundreds of thousands of copies of Bolton’s book, which in advance of a Tuesday release has already been distributed around the world and heavily excerpted in the media. 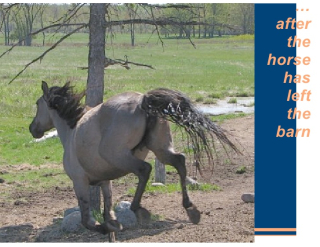 “The horse, as we used to say in Texas, seems to be out of the barn,” Lamberth said to Deputy Assistant Attorney General David M. Morrell.

The government sued Bolton on Tuesday, seven days before the planned June 23 publication, targeting any of Bolton’s profits from the 592-page book, including a reported $2 million advance.

The government did not sue publisher Simon & Schuster but argued in a potentially precedent-setting step for the court to enjoin Bolton, his publisher and bookstores from distribution.

“Disclosure of the manuscript will damage the national security of the United States,” the Justice Department wrote in a 37-page emergency request Wednesday, citing declarations by four of the government’s highest-ranking national security officials. The filing included a sealed submission alleging six examples of book passages requiring protection.

But the judge also blasted Bolton’s attorney for not waiting for the government to complete a pre-publication review for classified information before publishing, saying Bolton “didn’t get written authority.”

“Once he invoked that process, he can’t just walk away, and he didn’t tell the government he was walking away,” Lamberth said.

Bolton attorney Charles J. Cooper said in Friday’s hearing that Bolton participated in an “exhaustive, meticulous, deeply searching pre-publication process.” He was informed April 27 by a career White House official assigned to conduct the review, Ellen Knight, that the final version of the book did not contain classified material, Cooper said.

At that point, Cooper argued, Bolton fulfilled his obligation to the government. But Trump and White House aides withheld a final confirmation letter, “attempting to run out the clock before the [November] election,” Bolton said in a declaration. Cooper accused the administration of politicizing and abusing the review process to silence Bolton.

Cooper argued the hearing was mere “theater” for the government because Bolton is “utterly powerless” to stop a book already made public. More than 200,000 copies have already been distributed around the world, Cooper said. He cited “surreal” images Thursday of a CBS News reporter asking a White House spokeswoman about the emergency request with a book in hand.

On Saturday morning, U.S. District Judge Royce C. Lamberth ruled that John Bolton can publish his book despite efforts to block it:

A federal judge ruled Saturday that former national security adviser John Bolton can move forward in publishing his tell-all book despite efforts by the Trump administration to block the release because of concerns that classified information could be exposed.

[W]ith 200,000 copies of the book already distributed to booksellers across the country, attempting to block its release would be futile, Lamberth wrote. Major media organizations also obtained the book and published comprehensive accounts about it.

“In taking it upon himself to publish his book without securing final approval from national intelligence authorities, Bolton may indeed have caused the country irreparable harm. But in the Internet age, even a handful of copies in circulation could irrevocably destroy confidentiality,” Lamberth wrote.

“With hundreds of thousands of copies around the globe — many in newsrooms — the damage is done. There is no restoring the status quo,” the judge wrote.

The decision from U.S. District Judge Royce Lamberth is a victory for Bolton in a court case that involved core First Amendment and national security concerns. But the judge also made clear his concerns that Bolton had “gambled with the national security of the United States” by taking it upon himself to publish his memoir without formal clearance from a White House that says it was still reviewing it for classified information.

“Defendant Bolton has gambled with the national security of the United States. He has exposed his country to harm and himself to civil (and potentially criminal) liability,” Lamberth wrote. “But these facts do not control the motion before the Court. The government has failed to establish that an injunction will prevent irreparable harm.”

From a practical perspective, the ruling clears the path for a broader election-year readership and distribution of a memoir, due out Tuesday, that paints an unflattering portrait of President Donald Trump’s foreign policy decision-making during the turbulent year-and-a-half that Bolton spent in the White House.

Soon after the ruling was released, Trump tweeted that Bolton “broke the law by releasing Classified Information (in massive amounts). He must pay a very big price for this, as others have before him. This should never to happen again!!!”

So much winning! Trump has lost every court case this past week. Let’s hope this losing streak continues on Monday with the release of more U.S. Supreme Court opinions.

Bolton’s team insisted that Bolton had spent months addressing White House concerns about classified information and that Bolton had been assured in late April by the official he was working with that the manuscript no longer contained any such material. Bolton’s lawyers said the Trump administration’s efforts to block the book were a pretext to censor him for an account that the White House found unfavorable.

The Supreme Court has never upheld an attempt to stop publication of a work on matters of public importance, First Amendment law specialist Theodore J. Boutrous Jr. said in a friend-of-the-court brief for PEN America, a nonprofit writers group. He added the government has sought to circumvent that doctrine of so-called prior restraint on free speech and free press by asking the court to order Bolton to stop his publisher.

“The President is employing the apparatus of the federal government to punish his political enemies, thwart freedom of speech and pursue his political interests in an election year,” Boutrous wrote.

Mark S. Zaid, a lawyer who has represented more than two dozen current and former government employees who have sought to publish books, said the likelihood of the government being able to show “irreparable harm” if the injunction is not granted is “literally impossible.”

It was just a month ago that WATB conservatives, including Donald Trump, were all up in arms that social media companies were “censoring” conservative voices, i.e., fact checking their disinformation and wild-ass conspiracy theories by placing warning labels on their malignant posts. Trump says right-wing voices are being censored. The data says something else. Oh boo-hoo, you fucking internet trolls! 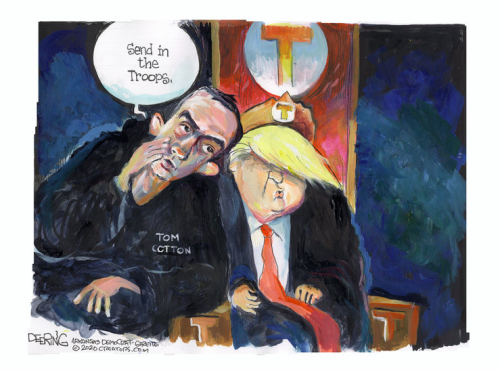 Since then, conservatives have had no issue with trying to silence the First Amendment rights of Black Lives Matter protestors to free speech, assembly and to petition the government by using the power and violence of various police organizations and the national guard to fire upon protestors with tear gas, pepper spray and rubber bullets. Senator Tom Cotton (R-AR) even demanded that the U.S. military be used against peaceful protestors in the streets of America. Donald Trump is still crowing about the “Battle of Lafayette Square,” violently dispersing peaceful protestors for his bullshit Bible photo-op at St. John’s Church.

Now Trump has tried and failed to censor John Bolton.

Soon he will be trying to censor his niece Mary Trump, who is set to publish her tell-all book this summer. Revealed: The Family Member Who Turned on Trump: Mary Trump, 55, the daughter of Fred Trump Jr. and eldest grandchild of Fred Trump Sr., is scheduled to release Too Much And Never Enough on July 28, Simon & Schuster confirmed Monday, just weeks before the Republican National Convention.

Last month, Trump’s lawyers demanded that Michael Cohen stop writing a ‘tell-all’ book about the president: The Daily Beast reported that in an attempt to suppress the revelations, lawyers for the Trump Organization last week sent Cohen, who is in prison, a cease and desist letter. Good luck with that!

Apparently the only free speech Trumpsters care about is their own social media trolling, everyone else’s speech must be suppressed. That is fascist.