While we’re on the topic of the decades-long GOP culture of corruption in Arizona, how can we not mention its poster boy, the “most corrupt sheriff in America,” crazy Uncle Joe Arpaio?

The Arizona Republic has a breakdown of how much the latest illegal racial profiling case has cost the nativist and racist residents of th state of Maricopa who keep reelecting Arpaio to office. Arpaio profiling case costs taxpayers another $13M:

Taxpayers in metro Phoenix will have to pick up an additional $13 million over the next year to cover the costs of a racial profiling case that has proven to be the thorniest legal entanglement faced by Sheriff Joe Arpaio.

Maricopa County, which has already shelled out $41 million during the past eight years in the case, must keep covering those legal costs until Arpaio’s office is released from the supervision of the case judge — a resolution that is years away.

County officials are expected to tentatively approve the additional spending on Monday. A final vote is set for late June.

The $41 million spending so far includes $10 million in attorney fees and $5 million for the monitoring staff. It represents only a part of the county’s heavy legal costs over Arpaio’s 23-year tenure.

The county has had to pay an additional $79 million in legal costs related to Arpaio’s office. That figure includes judgments, settlements and legal fees involving things such as lawsuits over jail deaths and the lawman’s failed investigations of political enemies.

Arpaio, who earns $100,000 a year as sheriff and owns more than $2 million in commercial real estate, has never had to pull money from his own pocket to pay for legal costs directly tied to his work as sheriff.

A federal judge ruled that the Maricopa County lawman and three of his top aides violated a federal court order meant to curtail racial profiling in his agency, according to a ruling issued Friday.

The civil contempt-of-court ruling from U.S. District Judge Murray Snow, which held Arpaio in contempt on three counts, brings to an end a lengthy proceeding that started a year ago when Snow convened a series of hearings in downtown Phoenix to determine whether Arpaio and his commanders defied Snow’s court orders.

“In short, the Court finds that the Defendants have engaged in multiple acts of misconduct, dishonesty, and bad faith with respect to the Plaintiff class and the protection of its rights,” Snow wrote in a 162-page finding of fact in the case.

The judge set a May 31 date for a hearing for attorneys to discuss penalties. Shortly thereafter, Snow said, he will issue an order on remedies and whether he will refer the case for criminal contempt.

The contempt proceedings were based on three alleged violations: that the Sheriff’s Office failed to turn over video evidence that was required before the racial-profiling trial; that officials continued to enforce immigration law after Snow barred the practice; and that Sheridan failed to quietly collect evidence after the trial, as Snow had ordered him to do.

The costs associated with the racial-profiling case now exceed $60 million, including at least $8.2 million in tax money tied to the outside attorneys required to represent all the parties in the ongoing legal proceedings.

Snow’s finding of contempt and the possibility of further criminal-contempt proceedings means those costs only will continue to rise.

The ruling also opens up Arpaio and his top aides to an array of sanctions. 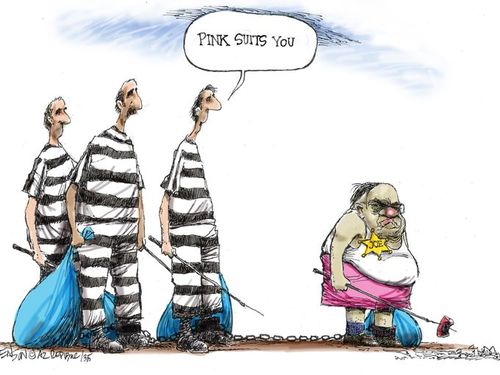 How about ordering him confined to his tent city and make him wear his pink underwear, and feed him his green bologna sandwiches? Karmic justice!

Check out the latest ads from The Lincoln Project, Unite the Country, Priorities USA, and Meidas Touch

‘Bounty Gate’: The experts speak – Trump knew and has done nothing