I covered this earlier this year, ‘Follow the Money’ – Congress needs to see Trump tax returns, but now House Ways & Means Committee Chair Richard Neal (D-MA) has finalized his demand letter under Code sec. 6103(f)):  Upon written request by either the Chairman of either the House Ways and Means Committee or the Senate Finance Committee, the Treasury Secretary “shall furnish such committee with any return or return information specified in such request.”

In legal parlance, “shall” is an imperative command; it is a ministerial duty that one is required to do. There is no discretion to comply.

The chairman of the House Ways and Means Committee in a letter to the IRS (h/t CNN) on Wednesday asked for six years of President Trump’s personal and business tax returns, a request with which the president immediately said he was not inclined to comply.

The committee chairman’s letter to the Internal Revenue Service — and Trump’s immediate and public response — set up what is likely to become an intense and drawn-out court fight as Democrats push to see tax records they think can shed light on numerous aspects of Trump’s business dealings and Trump resists their demands. The Ways and Means chairman’s request was expected but nonetheless represented a significant escalation in House Democrats’ wide-ranging probes of Trump and his administration.

The IRS was given until April 10 to respond. The panel’s chairman was able to make the request because of a 1924 law (see above) that gives the chairmen of the House Ways and Means Committee and the Senate Finance Committee broad powers to request and receive the tax returns of any American.

“Congress, as a coequal branch of government, has a duty to conduct oversight of departments and officials,” Ways and Means Committee Chairman Richard E. Neal (D-Mass.) said in a statement. “The Ways and Means Committee in particular has a responsibility to conduct oversight of our voluntary federal tax system and determine how Americans — including those elected to our highest office — are complying with those laws.”

Trump broke with precedent when he refused as a presidential candidate, and then when elected, to release his tax returns, something every president since Richard M. Nixon has done. The explanation he gave was that he was being audited, although numerous experts have said that an audit would not have prevented him from releasing his returns.

This claim will now be put to the test. President Trump has made 9,451 false or misleading claims over 801 days. If you believe Trump’s claims about his taxes, I have some ocean front property in Arizona to sell you (from my front porch I can see the sea).

Privately, Trump has told White House advisers that he does not plan to hand over his tax returns to Congress — and that he would fight the issue to the Supreme Court, hoping to stall it until after the 2020 election, according to two administration officials who spoke on the condition of anonymity to describe the conversations. Treasury officials will not comply with the request until they are compelled to do so, the officials said.

This is obstruction of congressional or administrative proceedings (18 U.S.C. 1505). Trump is telling Americans that he intends to violate the law. What is he hiding?

UPDATE: It is also a federal crime for Donald Trump to instruct the IRS to not comply with this congressional request. 26 U.S. Code § 7217. Prohibition on executive branch influence over taxpayer audits and other investigations, h/t Lawrence O’Donnell who explains this rarely invoked federal law (rare, because few presidents are stupid enough to actually do this). Video Link. 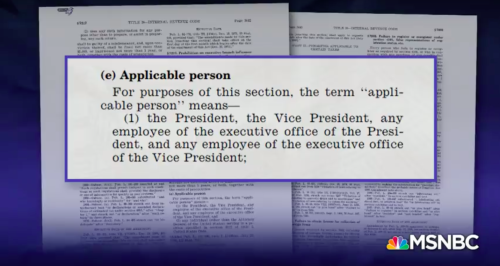 Trump may have already violated this law. Trump Asked That Confirmation of I.R.S. Counsel Be a Priority:

President Trump earlier this year asked Senator Mitch McConnell, the majority leader, to prioritize a confirmation vote for his nominee to be the chief counsel of the Internal Revenue Service, indicating that it was a higher priority than voting on the nomination of William P. Barr as attorney general, a person familiar with the conversation said.

In July, when Mr. Desmond was first being considered by the Senate Finance Committee, Bloomberg reported that he had briefly advised the Trump Organization on tax issues before Mr. Trump took office. James Wilkinson, a spokesman for Mr. Desmond, told Bloomberg that Mr. Desmond had helped with “a discrete reporting matter for a subsidiary company that was resolved with no tax impact.”

In private practice, Mr. Desmond worked for a time alongside William Nelson and Sheri Dillon, who currently serve as tax counsels to the Trump Organization.

[T]he request by Mr. Trump, made to Mr. McConnell on Feb. 5, raised questions about whether the president had other motivations. For months, the president has seethed over vows by congressional Democrats that they would move to obtain his tax returns from the I.R.S. And this week, the House Ways and Means Committee chairman, Representative Richard E. Neal, Democrat of Massachusetts, formally asked the I.R.S. for six years of the returns, using an obscure provision in the tax code to do so.

Neal’s request, which was made in a two-page letter to IRS Commissioner Charles Rettig, seeks broad details about Trump’s personal tax returns from 2013 to 2018 — including whether the returns are or have been under audit.

One of them, the Donald J. Trump Revocable Trust, is an umbrella entity that controls more than 100 other businesses, including his Mar-a-Lago Club in Florida. Some of those businesses also own a variety of Trump’s homes, hotels, golf clubs, his properties in Scotland and his namesake hotel in downtown Washington.

Neal also made requests of DTTM Operations LLC and DTTM Operations Managing Member Corp, which own a number of other Trump LLCs. These businesses collect licensing fees from various Trump-branded products. On his personal financial disclosures, Trump has never reported any income from these entities.

Neal’s letter was carefully worded. Democrats had obsessed for weeks over the language because they thought it would need to stand up to a court challenge. The letter attempted to explain that the information requests were squarely within Congress’s legal authority.

It said Neal’s committee was “considering legislative proposals and conducting oversight related to our Federal tax laws, including, but not limited to, the extent to which the IRS audits and enforces the Federal tax laws against the President.” It added that the committee needed to determine how closely the IRS was scrutinizing Trump’s tax returns, including those of his businesses.

Neal did not say what he will do if the IRS does not comply with his request. A spokesman, Daniel Rubin, said: “We believe the law is clear, so we expect the IRS to comply. But we’re working through what our options are now, including all legal options, if they don’t comply.”

The request poses a major test for Treasury Secretary Steven Mnuchin, who becomes the first Cabinet member in modern history tasked with deciding whether to turn over his boss’s tax returns to the opposition party.

It is unclear what legal argument Mnuchin could make to refuse the request [– there are none –] as the tax records would be unlikely to be considered protected under “executive privilege” because they do not pertain to Trump’s actions during his time in the White House.

The law that allows Neal to request the returns says the treasury secretary “shall” turn over the relevant records. It does not appear to give Mnuchin much wiggle room.

Congressional Democrats have launched a number of investigations into Trump’s financial dealings and into allegations of abuse of power and public corruption. They think that the information contained in his tax returns could be critical to answering many of their questions, including whether he misrepresented his wealth to insurers and banks, and whether he has financial foreign-government ties that could cloud his judgment on foreign policy matters related to Russia or Saudi Arabia.

Mnuchin testified before Neal’s committee several weeks ago and was asked whether he would comply with such a request. He declined to answer, saying only that he would consult with his legal counsel. He remarked, however, that there appeared to be little precedent for Congress to seek the tax records of an elected official.

“I’m not aware if there’s ever been a request for an elected official’s tax return*, but we will follow the law, and we will protect the president as we would protect any individual taxpayer under their rights,” Mnuchin said.

He also said he had not discussed the tax return matter with Trump or any other White House officials.

* Note: There has been: Richard Nixon’s tax returns. It is how his tax evasion was discovered, and became part of his impeachment. Also, NY Governor Nelson Rockefeller testified about his extensive tax records for two days before Congress to determine whether he had a conflict of interest when he was nominated by Gerald Ford to become his vice president. This was back in the day when Republicans actually cared about such things.

“I take the authority to make this request very seriously, and I approach it with the utmost care and respect. This request is about policy, not politics,” Neal said in his letter to the IRS. “My actions reflect an abiding reverence for our democracy and our institutions, and are in no way based on emotion of the moment or partisanship.”

President Trump’s New York-based accounting firm will respond to a request for 10 years’ worth of records from the firm’s work with Trump if it receives a congressional subpoena, a top House Democrat said Wednesday.

For more than a decade, Mazars and a predecessor firm signed off on financial statements for Trump that he used when seeking loans. Some of the statements include frequent exaggerations or inaccuracies and were accompanied by a note from the firm saying it was not responsible for the accuracy of the information.

The committee on March 20 asked the company for copies of “statements of financial condition” and audits prepared for Trump and several of his companies, including the one that owns the Trump International Hotel in downtown Washington. The panel also requested supporting documents used to produce the reports and communications between the firm and Trump.

“The accounting firm told us that they will respond and they just want a subpoena so we . . . we’ve got to figure out how to accommodate them,” Cummings said. “But apparently it would mean a friendly subpoena, I assume.”

The Oversight Committee did not respond to a request for comment or clarification about whether the company planned to turn over all of what was requested.

A company spokesman did not immediately respond to a request for comment. But in a March 27 letter responding to the committee, shared with The Washington Post, Mazars officials laid out rules and laws barring them from handing out client information without a “validly issued and enforceable subpoena.”

“As I am sure you can appreciate, Mazars cannot voluntarily turn over the documents sought in the request,” wrote Jerry D. Bernstein, a lawyer representing the firm.

The Trump crime family’s tax evasion, money laundering and financial fraud are about to unravel, it is only a matter of time. I’m sure Trump will tweet that he is being “mistreated” like mafia boss Al Capone. Exactly! Just wait until Allen Weisselberg, the chief financial officer of The Trump Organization, is called to testify before Congress to explain Trump’s financial records.

HB 2912: “Tort Reform” on Steroids Will Not Help Arizona’s Economy Recover from COVID-19