The world’s top 5 warmest years on record have occurred since 2014 — and it’s certain that 2019 will be added to this list as well. As Axios reports (see for interactive map above):

Such trends are indicative of long-term global warming due to human activities such as burning fossil fuels for energy and transportation, cutting down forests for agriculture and other purposes. Only 1 of the top 20 warmest years on record since instrument data began in 1880 took place before the year 2000. With greenhouse gas concentrations in the air at their highest level in 3 million years, the odds favor more record-shattering years in the future.

The Washington Post reports, Here’s where the U.S. is warming the fastest:

Many consider global warming beyond 2 degrees Celsius a critical threshold. World leaders who signed the 2015 Paris climate accords used it as a benchmark of success. Scientists warn virtually all the world’s coral reefs will disappear should we cross that point.

But in many places in the United States, average temperatures have already climbed near — or even past — that mark. These places, where average global temperatures are approaching or have even gone beyond 2 degrees Celsius above pre-Industrial Revolution levels, count as among the fastest-warming places on Earth, The Post’s Steven Mufson, Chris Mooney, Juliet Eilperin and John Muyskens report.

The Post team analyzed more than a century of National Oceanic and Atmospheric Administration temperature data across the country and found a number of 2C hot spots in the United States. The places where this new normal has set in offer a preview of what the rest of the world may look like when rapid climate change upends economies and ecosystems. Over the past century, the Earth has warmed 1 degree Celsius. The average warming in the Lower 48 U.S. states is similar. 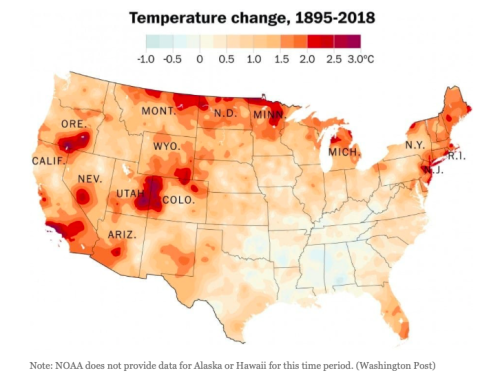 The fastest-warming part of the country is Alaska. The nation’s only state in the Arctic, a region where air temperatures are rising twice as fast as temperatures in lower latitudes, has seen more than 2 million acres go up in flames this year as firefighters struggle to contain wildfires and as meteorologists see temperature records shattered. Thawing permafrost is destabilizing roads and buildings and threatened to release even more locked-up greenhouse gases in the atmosphere.

In the Lower 48, Rhode Island is the first state where average temperatures rose beyond 2 degrees Celsius. Off the Ocean State’s coast, the lobster catch has dropped 75 percent over the past two decades as the crustaceans seek cooler water to the north. The world’s rising sea levels, which may be driven even higher in Rhode Island by changes in the Atlantic’s Gulf Stream, are already forcing some beachfront businesses and homeowners, such as those in a private community called Roy Carpenter’s Beach, to move their buildings back from the water.

Winter temperatures in the rest of the Northeast, except for Pennsylvania, have risen by 2 degrees Celsius since the winter of 1895-1896. New Jersey falls only a little bit shy of Rhode Island — and the 2C mark — for the entire year.

Residents along New Jersey’s Lake Hopatcong, which in the 1920s produced massive blocks of ice for New York City’s iceboxes, have had to cancel 11 of the past 12 ice fishing contests over concerns about thin ice. Average temperatures in Somerset Country, N.J., the country with the lake, have risen 2.2 degrees Celsius. Resident in Manhattan have seen that same increase since the late 1800s.

In Southern California, temperatures in Los Angeles County and the four counties surrounding it has risen on average 2.1 degrees Celsius since 1895. In the Mojave Desert, bird populations have collapsed during that period as the region deals with less rainfall, according to University of California at Berkeley research. The populous region’s city dwellers, meanwhile, have to contend with the threat of drought-fueled wildfires in recent years, including one last year that destroyed hundreds of homes in Malibu.

Some less populated, higher-altitude parts of the country have already crossed the 2-degree threshold, too. They include Oregon’s high desert region and in the Rocky Mountains in eastern Utah and western Colorado. The latter forms the Upper Basin of the Colorado River, which provides water to major metropolitan areas such as Los Angeles, Phoenix and Las Vegas. Drought and overuse are drying up that crucial river system.

This past Thursday, the federal Bureau of Reclamation activated the mandatory reductions in water deliveries when it released projections showing that as of Jan. 1, the level of Lake Mead will sit just below a threshold that triggers the cuts. First-ever mandatory water cutbacks will kick in next year along the Colorado River:

Arizona, Nevada and Mexico will be required to take less water from the Colorado River for the first time next year under a set of agreements that aim to keep enough water in Lake Mead to reduce the risk of a crash.

Arizona and Nevada agreed to leave a portion of their water allotments in the reservoir under a landmark deal with California called the Lower Basin Drought Contingency Plan, which the states’ representatives signed at Hoover Dam in May.

California agreed to contribute water at a lower trigger point if the reservoir continues to fall. And Mexico agreed under a separate accord to start contributing to help prop up Lake Mead (above), which is now 39 percent full.

The Colorado River’s reservoirs have dropped dramatically since 2000 during one of the most extreme droughts in centuries. Farms and cities across the Southwest have long been taking more from the river than what flows into it, and climate change is adding to the strains by pushing up temperatures.

Reservoirs were approaching levels last year that would have triggered a shortage and required deeper cuts, but heavy snow across much of the Rocky Mountains this winter boosted runoff and raised reservoir levels. The river’s reservoirs are now at 55% of total capacity, up from 49% at the same time last year.

But Lake Mead is still projected to be just below the threshold of 1,090 feet above sea level at the beginning of next year. That will put the reservoir in a zone called “Tier Zero,” at which the first cuts take effect.

“While we appreciate this year’s above-average snowpack, one good year doesn’t mean the drought is over. We must remain vigilant,” federal Reclamation Commissioner Brenda Burman said in a statement. She applauded the seven states that depend on the river for coming together to finish the set of drought-contingency plans. Burman said the actions laid out under those agreements “will help ensure the reliability of the Colorado River system for the 40 million people dependent upon it.”

Arizona will see a cut of 192,000 acre-feet in water deliveries next year, or 6.9% of its total allotment of 2.8 million acre-feet. Nevada’s share will be reduced by 8,000 acre-feet, while Mexico’s will take 41,000 acre-feet less. That water will remain in Lake Mead, and will only be recovered once the reservoir rises above an elevation of 1,100 feet.

The cuts under the Drought Contingency Plan, or DCP, represent 12% of the total water supply for the Central Arizona Project, which delivers water by canal to Phoenix, Tucson and other areas. Chuck Cullom, manager of Colorado River programs for CAP, said this reduction will mean “eliminating the water that would have been available for underground storage, banking and replenishment,” and cutting CAP deliveries to agriculture by about 15%.

That reduction, while significant, is about the same as what CAP has been leaving voluntarily in Lake Mead since 2015 through conservation efforts, Cullom wrote in a blog post. “In essence, CAP and its water users have been planning and preparing for Tier Zero reductions for the past five years. The difference is that those previous contributions were voluntary — now, under DCP, these contributions are mandatory.”

The drought-contingency plans — one for the three Lower Basin states and the other for the Upper Basin states of Colorado, Wyoming, Utah and New Mexico — are designed to prop up the levels of Lake Mead and Lake Powell, the nation’s largest reservoirs, between 2020 and 2026.

Negotiations are set to begin next year a new set of guidelines for managing shortages after 2026.

The Colorado River and its tributaries provide water for about 40 million people and more than 5 million acres of farmland from Wyoming to Southern California.

The legal framework that divides the Colorado River among seven states and Mexico was established during much wetter times nearly a century ago, starting with the 1922 Colorado River Compact. That and subsequent agreements have allocated far more water than what flows in the river in an average year, leading to chronic overuse.

For decades, the river has been so heavily used that it seldom reaches the sea. Its delta in Mexico has shriveled, leaving only small wetlands in a dusty stretch of desert.

Planet-warming pollution and rising global temperatures have increasingly affected the river. Scientific research has found that about half the trend of decreasing runoff from 2000-2014 in the Upper Colorado River Basin was the result of unprecedented warming. Higher temperatures have reduced the flow of streams and increased the amount of water that evaporates off the landscape. 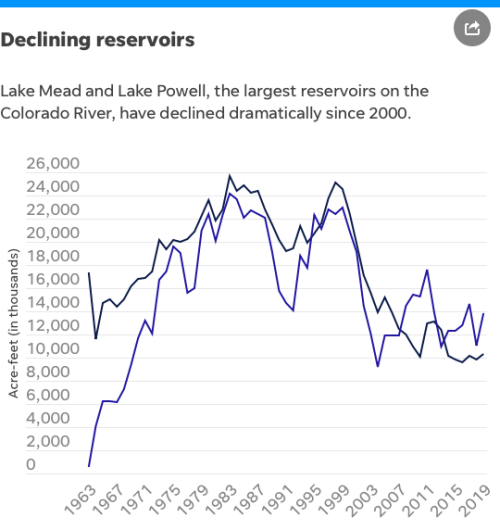 The river’s flow from 2000-2019 has decreased by about 17% from the 20th-century average. And climate models point to even drier conditions as the world continues to heat up due to greenhouse gases.

In one study, climate scientists Brad Udall and Jonathan Overpeck used climate models to estimate a business-as-usual scenario of greenhouse gas emissions. They projected that without changes in precipitation, warming will likely cause the Colorado River’s flow to decrease by 35% or more by the end of the century.

These first mandatory cutbacks on the Colorado River represent “the first acknowledgment that we have a problem and we need to solve it,” said Udall, a water and climate scientist at Colorado State University. “It’s the beginning of a solution and it’s also the beginning of the real problem. I mean, as much as we’ve seen this problem in the last 20 years, the climate models really project a grim future with regard to temperatures.”

Udall said the river’s shrinking flow adds to other dramatic symptoms of the changing climate, from this summer’s heatwave in Europe to the melting of ice in Greenland and the wildfires in Siberia.

“We can solve this climate problem. We just need to acknowledge it and get to work solving it,” Udall said.

There is also a stretch of counties from Montana to Michigan near the U.S.-Canadian border and along the Great Lakes shoreline that has also warmed significantly since the beginning of the 20th century.

Higher average temperatures in Michigan’s Leelanau and Benzie counties, which each have surpassed 2.2 degrees Celsius, have extended growing seasons in Sleeping Bear Dunes National Lakeshore, which in turn have been a boon for mosquitoes, biting flies and invasive species, according to the National Park Service. And in Montana’s Glacier County, where temperatures have risen 1.8 degrees Celsius since the late 1800s, the namesake masses of ice of Glacier National Park have “dramatically reduced” in size since 1966, according to the U.S. Geological Survey.

For all the rising temperatures, there is one part of the country that has not warmed significantly since 1895. It’s the Deep South, especially Mississippi and Alabama. A combination of atmospheric cycles driven by the Pacific and Atlantic oceans and particle pollution from cars and factories have contributed to modest cooling in some counties in the already balmy region.