GOP Budget: magical thinking – ‘If you believe, clap your hands!’

Home/AZ Politics/GOP Budget: magical thinking – ‘If you believe, clap your hands!’
Previous Next

GOP Budget: magical thinking – ‘If you believe, clap your hands!’

The Ryan budget relies on “magical thinking,” i.e., “dynamic scoring” in which Ryan believes he can pay for his wish list simply by implementing it, which he’s certain would make the economy soar!

The GOP’s flim-flam man suffers from Peter Pan syndrome: Do you believe in fairies? Say quick that you believe. If you believe, clap your hands!

There aren’t many differences between this year’s House Republican budget plan from Budget Committee Chairman Paul Ryan (R-Wis.) and his blueprints from recent years. Medicare would still be privatized; the Affordable Care Act would still be repealed and replaced with nothing; aid to the poor would still be gutted; the rich would still get a massive tax break; etc.

But this year, Ryan embraced “dynamic scoring” as a way to help finance his far-right agenda. In other words, Ryan believes he can pay for his wish list by implementing it, which he’s certain would make the economy soar, which means he’s comfortable counting predicted revenue from the super-charged economy he thinks he’ll create as actual revenue.

In fact, GOP lawmakers like this approach so much, they want it to be required.

[It would appear this is the next leap of faith in faith based supply-side “trickle down” GOP economics.]

As the chasm between the parties grows wider, it’s not uncommon to hear speculation about whether Democrats and Republicans have entirely distinct realities, each with their own rules. This reinforces the thesis — Democrats would rely on budget math, while Republicans prefer their own friendlier version of budget math that’s more in line with what they want to hear.

The same bill would also require the Congressional Budget Office to “consider the effects of legislation over a 40-year time horizon, not the 10 years the nonpartisan agency uses today.”

Think about that for a second: the CBO’s number-counters would be mandated to give Congress credible estimates about U.S. finances four decades in advance. (Try to imagine CBO officials making educated guesses in 1974 about the nation’s fiscal landscape today. Then imagine policymakers making decisions in 1974 based on those projections.)

We know what’s driving this nonsense, and it’s absurd.

Democrats argued that the bill is an attempt to create a process at the CBO that lets Republicans point to the economic benefits of tax cuts as a way to justify those tax cuts.

“What this bill is after is simply to do the analysis primarily on the tax policy,” Budget Committee ranking member Chris Van Hollen (D-Md.) said.

“It’s motivated primarily by this idea that if you provide big tax breaks to people at the very high end of the income ladder, it will trickle down and lift up all the boats,” he added. “We saw how well that worked in the 2000s.”

Indeed, Van Hollen’s criticisms are well grounded – the Republicans’ “Pro-Growth Budgeting Act” would not apply “dynamic” scoring to appropriations bills. In other words, the number-counters would be required to project a super-charged economy following tax breaks, but not investments in areas like education or infrastructure.

‘Dynamic’ scoring is [just] a way to manipulate the budget process and it’s wholly unnecessary.

By the way, the right-wing has bastardized the aphorism,”a rising tide lifts all boats.” It’s original intended meaning was that improvements in the general economy will benefit all participants in that economy.

In other words, improve the economic conditions of people at the bottom, and the “rising tide” of their economic status will also “lift the yachts” of those at the top. The right-wing has flipped this on its head to defend tax cuts and other economic policies where the initial beneficiaries are high income earners, on the promise that it will eventually “trickle down” to people below.

Which in the real world is something like this . . . 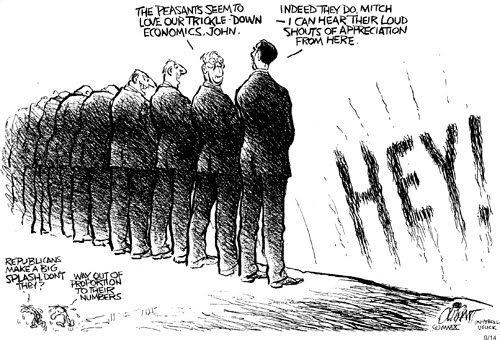