George Packer had an important piece at The Atlantic last week. The Corruption of the Republican Party (snippet):

Why has the Republican Party become so thoroughly corrupt? The reason is historical—it goes back many decades—and, in a way, philosophical. The party is best understood as an insurgency that carried the seeds of its own corruption from the start.

The corruption I mean has less to do with individual perfidy than institutional depravity. It isn’t an occasional failure to uphold norms, but a consistent repudiation of them. It isn’t about dirty money so much as the pursuit and abuse of power—power as an end in itself, justifying almost any means.

The fact that no plausible election outcome can check the abuse of power is what makes political corruption so dangerous. It strikes at the heart of democracy. It destroys the compact between the people and the government. In rendering voters voiceless, it pushes everyone closer to the use of undemocratic means.

And so it has come to pass that Governor Doug Ducey, the ice cream man hired by Koch industries to run their Southwest subsidiary formerly known as the state of Arizona, bowed to the demands of the contemptible Septuagenarian Ninja Turtle, Senate Majority Leader Mitch McConnell, and purposefully disregarded the will of Arizona voters in a democratically held election in November by appointing the election loser, Rep. Martha McSally, to John McCain’s vacated Senate seat as a consolation prize.

Why do we even bother holding elections if our authoritarian GOP masters feel free to do whatever the hell they want to do without any regard for the will of the voters they pretend to represent?

Gov. Doug Ducey’s decision to appoint McSally, announced in a statement Tuesday and effective next month, revives her political life less than two months after she narrowly lost the race for the state’s other Senate seat to Democrat Kyrsten Sinema.

Sinema will assume the role of Arizona’s senior senator, and will be sworn in on Jan. 3, with the new class of senators, Ducey said at a joint news conference Tuesday with McSally.

“I’m also going to respect the will of voters,” Ducey said [sarcastically]. “Sen.-elect Sinema was elected to the office and she’s going to be sworn in first.”

In prepared statements, Ducey thanked Kyl for his service and invoked McCain’s legacy of service.

McSally echoed similar sentiments and both she and Ducey set the expectation that McSally would work across party lines with Sinema, her 2018 political rival, to advocate for Arizona. McSally said she would represent the interests of all Arizonans.

“As I now deploy to the Senate, I pledge to devote all of my energies to ensuring that all Arizonans have a voice,” she said.

Enough with the damn combat lingo! You can always re-up in the Reserves and go fly more combat missions if that is what really gives you your jollies, Martha.

“I also look forward to working with Kyrsten Sinema in the Senate, just like we did in the House. There’s a lot of common ground between us, and I’m ready to hit it running. Arizona’s two senators have always worked together, for decades. That’s our tradition and how we’re most effective, and that’s how I plan to serve.”

Ducey cited McSally’s military background and six deployments to the Middle East and Afghanistan. He also noted her battle with the Pentagon years ago to overturn a policy that required U.S. servicewomen in Saudi Arabia to wear Muslim abayas and headscarves.

McSally’s one claim to fame, her opposition to wearing a head scarf while in Muslim countries, was not universally shared by her fellow female officers in the Air Force. Lt. Col. Cheryl Garner, USAF Best Defense guest columnist for Foreign Policy (March 2011) wrote Hey, it should be our choice – The Best Defense – Foreign Policy.

To those critical of the appointment, given McSally’s loss, Ducey noted that she earned the support of 1 million voters.

So what? Hillary Clinton won the popular vote by almost 3 million votes despite an unprecedented effort from Russian interference to elect Donald Trump president. Did Hillary get a consolation prize for losing the electoral college? No. Did Al Gore get a consolation prize for winning the popular vote, but losing the electoral college vote 5-4 in Bush v. Gore? No. This is the most ridiculous illogical argument ever (lookin’ at you Laurie Roberts).

Ducey’s pick may anger an array of voters, from liberals and independents who rejected McSally in November to conservatives who view her as having blocked former state Sen. Kelli Ward from exciting the GOP base during the 2018 primary election.

Ducey’s decision also may not sit well with another portion of the Republican electorate — the so-called “McCain Republicans” who were unsettled by her spurn of the senator as he battled cancer during her 2018 Senate race.

If McSally were to lose again in 2020, it could spark a new round of Republican recriminations.

Well, Republicans will have two years to prepare their recriminations because the voters who rejected McSally this past November will be loaded for bear coming after the “anointed one” who was rewarded with a Senate seat as a consolation prize despite her having been rejected by Arizona voters. McSally will pay the price for this rejection of democratic elections and basic sense of fair play.

Public reaction, at least the quick takes on Twitter, often suggested dismay and disgust that Ducey would override the wishes of voters and install McSally in the seat once held by the late U.S. Sen. John McCain. Partisan divide emerges after Gov. Doug Ducey’s appointment of Martha McSally to Senate:

For some, the appointment amounted to what they viewed as a “participation award.”

“Arizona voters rejected Martha McSally. They rejected her plan to take health care away from millions of Americans. They rejected her record of putting wealthy corporations ahead of hardworking families,” Perez said. “But now Gov. Ducey is ignoring the voice of the people and forcing McSally’s disastrous judgment on Arizonans. Democrats beat McSally in 2018. We’ll do it again in 2020.”

“Why appoint a loser when you could find a fresh face with a better shot in 2020? That’s the question that will haunt Gov. Ducey and the Washington Republicans who installed Martha McSally to a seat she couldn’t earn,” said DSCC spokeswoman Lauren Passalacqua. “McSally was a weak candidate who ran a disrespectful campaign, and lied about her record of voting to gut pre-existing conditions coverage for 2.8 million Arizonans. Voters rejected her once, and will do so again.”

Larry Sabato, the political scientist who directs the University of Virginia’s Center for Politics, warned that the choice could backfire for the GOP if McSally doesn’t act more like McCain.

“Her voting record might end up pretty much the same as temp-appointee Jon Kyl. But after losing Senate race this year, she faces voters again in ’20. Some maverick moves could help her,” Sabato said in a series of tweets.

“Arizona is clearly changing and moderating. Can McSally keep the very conservative pro-Trump base happy while appealing to young and minority voters? It won’t be easy, but if she can’t find ways, McSally could lose the second Senate seat, too.”

Nicole Brener-Schmitz, the political director of NARAL, which supports abortion rights, said McSally is in league with extremists.

“Martha McSally proved during her unsuccessful 2018 Senate bid that she is out of step with the 7 in 10 Arizonans who believe that women, not politicians, have the right to decide if, when, and how to start a family,” she said. “The appointment of McSally to the Senate shows the true colors of the GOP who prioritize their extremist anti-choice agenda over the wishes of voters. NARAL and our members across Arizona will be there to hold McSally accountable at every turn.”

The left-leaning League of Conservation Voters and its affiliated Chispa Arizona again panned McSally for her environmental record.

“The people of Arizona have already rejected Martha McSally for this job. As a Congresswoman, she has supported a $25 billion tax windfall for oil companies and voted to block safeguards against air pollution. Her support for the fossil fuel agenda is limiting Arizona’s clean energy potential, contaminating the air we breathe, and exacerbating health disparities among Latinos, low-income families, and people of color,” said Chispa Arizona Executive Director Laura Dent.

And one of McSally’s potential opponents in 2020, Rep. Ruben Gallego, had this to say: 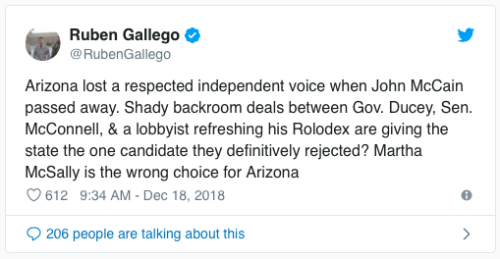