Steve Benen had an important post this past week reminding voters about the so-called GOP jobs bills that they claim to have passed — it just ain’t so. ‘Just not many’ jobs in the GOP jobs plan: 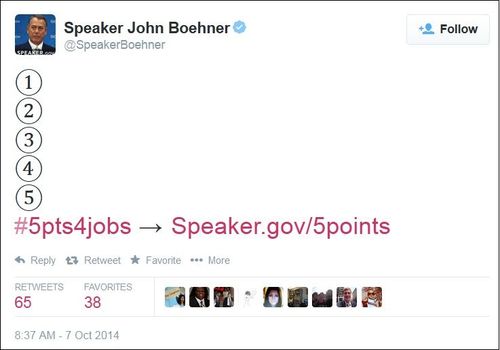 What Senate Tea-Publicans do not obstruct with the greatest abuse of the Senate filibuster rules in American history, the weakest Speaker of the House in modern American history, John Boehner, the consensus “Worst. Speaker. Ever.” fails to bring up for a vote in the House. This is the less-than-less-than-do-nothing 113th Congress — managing to exceed the previous less-than-do-nothing 112th Congress in lack of productivity.

If you owned a business and these people worked for you, you would not hesitate to fire them.

It was obviously just a mix-up — Boehner wasn’t trying to embarrass his party on purpose — but it underscored an important truth about the lack of ideas from GOP lawmakers on the nation’s #1 issue.

Boehner and most congressional Republicans, of course, don’t see it that way. Mention the word “jobs,” and GOP lawmakers have an immediate and reflexive talking point: House Republicans passed “more than 40 jobs bills” in this Congress, but those rascally Senate Democrats refused to pass them.

Reality tells a different story. Those who actually read the list of the “more than 40 jobs bills” notice that several of the measures aren’t related to job creation at all. What’s more, Jackie Calmes this week sought out economists, including plenty of conservative economists, for their impressions of the Republicans’ agenda.

”Some of those things will help,” Matthew J. Slaughter, an economics professor at Dartmouth College, said after reviewing nearly four dozen measures that House Republicans have labeled ”jobs bills.” He cited some business tax cuts, for example, even as he cautioned about the cost of such actions. [Tax expenditures without a pay-for adds to the deficit.]

”But,” added Mr. Slaughter, who served on President George W. Bush’s Council of Economic Advisers, ”it just struck me as sort of a compendium of modest expectations. If you ask me, ‘What’s your ballpark guess for how many jobs are going to be created?,’ it’s just not many.” […]

While private sector analysts say that the varied Boehner list is not suitable to their computer models, Joel Prakken, a founder of the St. Louis-based Macroeconomic Advisers, said, ‘‘I don’t think you would get a rush of hiring from passing these bills.”

In 2011, President Obama presented Congress with a package called the American Jobs Act, which independent analysts said would have added about 150,000 jobs per month to the economy, every month for a year. Republicans refused to even a hold a vote on the president’s proposal, despite public demand for policymakers to address the jobs crisis.

But the ensuing challenge from Democrats to GOP lawmakers was specific: if you don’t like Obama’s plan, present an alternative, allow independent analysts to scrutinize the preferred Republican approach, and provide an estimate of how many Americans jobs it would create.

Republicans never even tried to meet this challenge, and the reason why is pretty obvious: the GOP alternative, if it existed, would look pretty ridiculous when compared to the White House’s plan. Republicans keep screaming “more than 40 jobs bills!” in the hopes that (a) no one will look too closely at the bills themselves; and (b) voters won’t notice that the GOP jobs bills won’t actually create jobs.

It’d be incredibly easy for Boehner and his allies to prove otherwise – they could tell us exactly how many jobs their jobs package would produce. But that doesn’t happen because it can’t happen.

On the contrary, congressional Republicans have not only failed to produce a credible jobs plan, they’ve also taken a variety of steps intended to slow economic growth – taking capital out of the economy through spending cuts, shutting down the government, and threatening default through a series of debt-ceiling hostage crises.

Calmes’ report added that “most economists and business executives … would be content if Republicans simply ”do no harm,” as some put it, by avoiding self-imposed crises.” In recent years, even this has been too much to ask.

Republicans count on the media not informing low information voters of any of this, or the GOP would be in real trouble. Fortunately for the GOP, the feckless media can always be relied upon to fail to inform the public. And we are all worse off for it.