Thursday, Sen. Paul tried to track down a copy of the draft, but he said he was denied access to a room when aides inside told the senator there wasn’t a bill to see. At one point, a GOP staff member allowed House Minority Whip Steny Hoyer, of Maryland, Massachusetts Rep. Joe Kennedy and a dozen or so reporters into the room to inspect it themselves to see that it was, in fact, bill-less.

“This should be an open and transparent process,” Paul said Thursday following his search. “This is being presented as if it were a national secret, as if this was a plot to invade another country, as if this were national security. That’s wrong.” 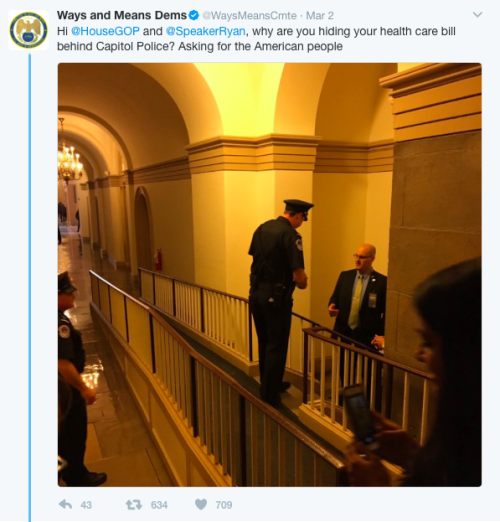 Paul wasn’t alone in his health care escapade. Democratic Whip Steny Hoyer went live on Facebook Thursday in search of the legislation and Rep. Nancy Pelosi also tweeted in support of the search.

“I’m looking for the House GOP’s secret ACA repeal bill since they are hiding it from Members and the public,” Hoyer posted on Facebook. On Monday, GOP leadership released its Obamacare replacement bill from its secret Capitol basement lair. They should have left it there never to be seen in public.

The so-called American Health Care Act is designed to fail, and is even worse than everyone expected from the post-policy nihilists of the GOP.

For a detailed analysis of what the bill does and does not do, see what has been written by Sarah Kliff (Vox.com), Tierney Sneed (Talking Points Memo), Kevin Drum (Mother Jones), and Michael Hiltzik (Los Angeles Times).

Ezra Klein at Vox.com summarizes the problem as The GOP health bill doesn’t know what problem it’s trying to solve:

[T]he GOP intends to hold committee votes on their bill two days after releasing it, and without a Congressional Budget Office report estimating either coverage or fiscal effects. It’s breathtaking.

The GOP plan will lead to significant declines in coverage (Loren Adler estimates an eye-popping 15 to 20 million people will lose insurance) as well as accelerating the exhaustion of the Medicare trust fund due to the tax cuts. After years of Republicans complaining that co-pays and deductibles were too high in Obamacare, co-pays and deductibles will be significantly higher under their replacement. The plan will significantly reduce taxes on the rich.

I honestly have no idea what it will do to the deficit — it’s hard to see any short-term reduction, and if there’s a long-term reduction, it will only be due to deep, deep Medicaid cuts, which will mean a correspondingly large increase in the uninsured. It’s worth noting that the GOP’s main idea for reducing health care costs — ending or capping the tax break for employer-provided insurance — has been left out of this legislation. There is simply no theory of cost control in this bill at all.

The individual mandate is gone, healthy people can buy coverage at any time with only a 30 percent penalty, and eliminating actuarial values makes it simpler for insurers to pull the young and healthy away from older and sick. Death spirals seem very likely in weak markets. Republicans will fully own those death spirals.

* * *
Hypocrisy is a minor sin in politics, but still, it is remarkable how much of it there is to be found in this legislation. . . . The GOP bill is similarly aggressive with [delay] tricks, delaying changes to the Medicaid expansion until 2020 and pushing Obamacare’s tax on expensive insurance plans out until 2025.

It is difficult to say what question, or set of questions, would lead to this bill as an answer. Were voters clamoring for a bill that cut taxes on the rich, raised premiums on the old, and cut subsidies for the poor? Will Americans be happy when 15 million people lose their health insurance and many of those remaining face higher deductibles?

Nor are movement conservatives pleased with this plan, which leaves the basic architecture of Obamacare intact, and doesn’t begin to phase out the Medicaid expansion until 2020 (raising the question of whether it will ever phase out at all). . . . Rep. Jordan Amash called it “Obamacare 2.0.” [senator Aqua Buddha calls it “Obamacare lite.” Rand Paul: GOP’s ‘Obamacare Lite’ Plan Won’t Pass]

All this speaks to the Republican Party’s fundamental difficulty on health care, which Peter Suderman captures well: “The GOP’s real problem, in terms of passing legislation, isn’t that the party can’t agree on specifics, or that legislators need to bargain their way toward a compromise that gives everyone something they want. It’s that they don’t agree on, or in some cases even have, basic goals when it comes to health policy.”

* * *
Because Republicans aren’t even trying to win Democratic votes, they’re stuck designing a bill that can wiggle through the budget reconciliation process (another thing they complained about Democrats doing). That means they can’t make major changes to insurance markets like repealing Obamacare’s essential benefit standards or allowing insurance to be sold across state lines. That last part is particularly striking, given that it was one of President Trump’s five demands in his speech last week. . . . but now they can’t get those savings at all — which means sacrificing a key part of their theory of cost control.

This bill has a lot of problems, and more will come clear as experts study its language, the Congressional Budget Office release its estimates, and industry players make themselves heard. But the biggest problem this bill has is that it’s not clear why it exists. What does it make better? What is it even trying to achieve? Democrats wanted to cover more people and reduce long-term costs, and they had an argument for how their bill did both. As far as I can tell, Republicans have neither. At best, you can say this bill makes every obvious health care metric a bit worse, but at least it cuts taxes on rich people? Is that really a winning argument in American politics?

Keep in mind, the House is voting on this bill this week with little debate and no public input.  Call your member of congress and senators and tell him or her to oppose this bill. Democratic votes combined with the Tea-Publican House Freedom Caucus votes can defeat this godawful bill. G.O.P. Health Bill Faces Revolt From Conservative Forces. Kill this bill!

UPDATE: New York Times analysis, Millions Risk Losing Health Insurance in Republican Plan, Analysts Say: Americans in their 50s and 60s would be especially likely to find coverage unaffordable in a system providing tax credits of $2000 to $4000 per year based on age, rather than income level. Republicans’ Changes to Medicaid Could Have Larger Impact Than Their Changes to Obamacare: The changes would not begin until 2020. But the long-term impact on states would be unequal, with some faring better than others, depending on how much they spent on the program, their demographics and whether they participated in President Obama’s expansion of Medicaid eligibility.

The Times editorializes, No Wonder the Republicans Hid the Health Bill.

UPDATE: The Washington Post analysis, The debate over the Affordable Care Act is really a debate over wealth redistribution: Abolishing a program makes it hard to avoid this central question: What is the minimum society should provide for its most vulnerable? Income separates the winners and losers in Republicans’ health-care plans. House Republicans plan to eliminate nearly every tax increase that was included included in the ACA, many of which target rich people. What the GOP health plan really means for taxes.

Obamacare repeal guts crucial public health funds: The latest GOP health-care plan would eliminate funds for fundamental public health programs of the Centers for Disease Control and Prevention, from prevention of bioterrorism and disease outbreaks to immunizations and heart disease screening. As Matt O’Brien sums up, The Republican plan to replace Obamacare makes no sense.

The Post editorializes: An Obamacare repeal that’s both heartless and reckless.