There is yet another Republican presidential primary debate tonight, on Fox Business Network at 7;00 p.m., from North Charleston Coliseum, Charleston, S.C.  The moderators are Neil Cavuto and Maria Bartiromo. 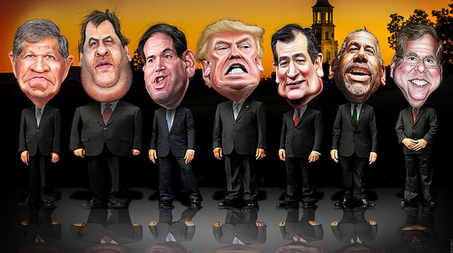 South Carolina Governor Nikki Haley, who was crtiical of Donald Trump in her Republican response to the State of the Union and was immediately savaged by Trump supporters in social media and the conservative media entertainment complex, is likely to be on hand. Trump, conservative pundits hit back at Haley for State of the Union response | Fox News. Let’s see if Trump’s thugs rough her up like they do to protesters at Trump rallies. You can bet “The Donald” will have some more choice insults for the governor.

It will be interesting to see how the fluffers from Fox Business Network handle Trump openly questioning whether Cruz’ Canadian birth makes him ineligible to run for president.

If I were Trump I would have all of my supporters in the audience wear the jersey of the Calgary Flames NHL team just to rattle his cage. It also makes for a good visual.