I didn’t realize that Republican strategists were actually pushing Congressional recommit votes on immigration-related language to paint Democrats as pro-immigrant. I have to say, I’m utterly delighted that they are hanging that anchor around their own necks.

I think most Americans, and especially independents, recoil at policies and political stands they see as cruel, petty, or mean. And there is little in American politics today that is meaner and slimier than the hatred wrapped in patriotism that is the hard-right GOP message on immigration. I get a little frisson of delight when I imagine the ads they are brewing up using these votes.

Yeah. That’ll work on the vast majority of Americans who aren’t eaten up with xenophobic mania.

The GOP apparently didn’t learn their lesson in 2006 when their ($) candidates who made immigrant-baiting a major theme of their campaigns got their clocks cleaned across the board. If they need some more tutoring, I think we Democrats should be happy to give it to them.

We need to establish a Democratic system of values regarding the immigration debate, however. The only reason why Republicans are driving this issue is because they at least have a consistent narrative – hateful and divisive though it may be. We Democrats need  to talk about eliminating the need for illegal border crossings, saving lives and reducing the crime along the border, treating both American and Mexican laborers fairly in both countries, and the great American tradition of welcoming and assimilating new citizens.

Democrats sound soulless and stupid when we ape Republican themes of cracking down on employers, and militarizing the border, and treating immigrants as criminals and undesirables; when our Democratic politicians ‘me too’ the block-headed policy initiatives of Republicans – like building a damn wall – it simply makes the insane seem sensible. 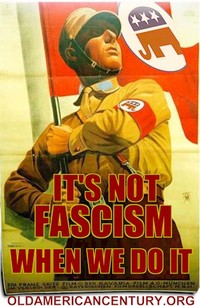 I don’t want our party to create a compromise with the sheer insanity that passes for policy among Republicans. I would prefer the status quo ante to compromises that would make life even worse for the immigrants already here, endanger the lives of those that will surely come, and entrench harmful policies in our immigration law for another generation. This is a fight that we can win if we stop accepting the Republican terms for this debate: hatred, fear, xenophobia, and prejudice.

So the GOP wants to square off and make immigration a central issue? I say bring it on, because they have nothing useful to say on the subject. The only we won’t win is if we accept that their vision of immigration of in America is in any way legitimate or useful. We have to name the prejudice and hate fueling the GOP’s obsession with the immigration issue, or they get to continue to appeal to voters anxieties and prejudices without paying the electoral price. I am sickened when I hear Democrats talking about immigration in the same fearful and divisive way that Republicans do, simply because Democratic leaders aren’t offering an alternative vocabulary of ideas.

We got lucky in 2006 that the American people are naturally resistant to demagogues, and largely resisted the GOP siren songs without much help from Democrats; we would be foolish to continue to rely on Americans’ continued self-discipline if we aren’t even offering a counter-narrative they can stop their ears with.