In a perfectly party-line vote of 212 to 182, the GOP wholly rejected House Resolution 935, to establish a select investigative sub-committee for the Coronavirus Crisis under the House Oversight and Reform Committee. Republicans lost the vote, but they made their desire to obfuscate this Administration’s failure very clear. 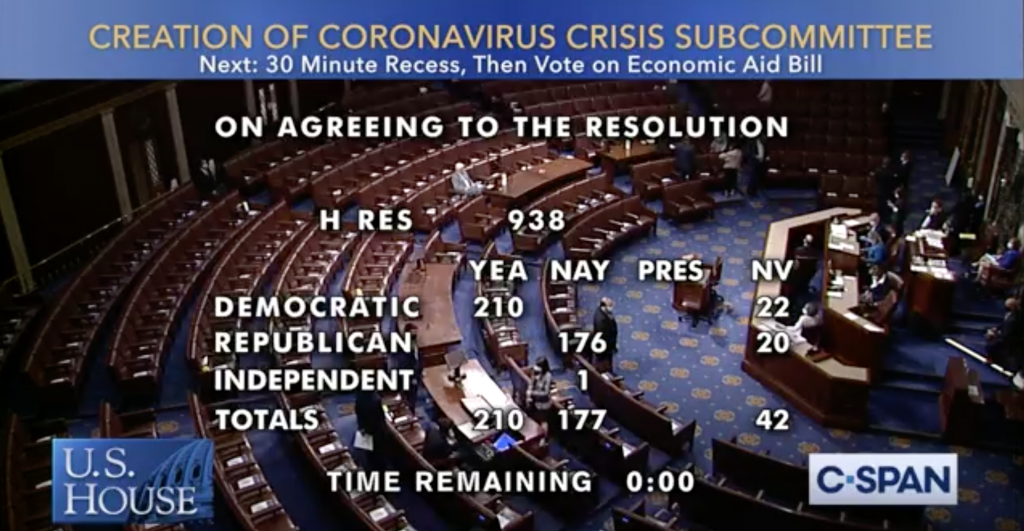 Not a single GOP Member voted in favor of the special select investigative sub-committee on the Coronavirus Crisis.

The Sub-Committee will have the powers of subpoena and taking depositions under oath. I can certainly see why the GOP fears that. I also see conflict coming over Administration compliance with any subpoenas the sub-committee may issue. The complete stonewalling of Congressional oversight by this Administration almost certainly continue; I wonder if the American people will put up with such behavior while they are dying in droves?

Of course, all the GOP members of the House from Arizona (Lesko, Gosar, Schweikert, and Biggs) voted against establishing the sub-committee. Let them know what you think of their votes if you live in their districts, and then tell them again this November. Register for the PEVL through your county registrar’s office to ensure your right to vote by mail.

Debbie Lesko has already attacked the new sub-committee in her Twitter stream just minutes after the resolution passed:

I understand the important role of congressional oversight and I was happy to support the oversight included in the CARES Act, but Pelosi's politically partisan new oversight committee will only be used to attack @realdonaldtrump and influence the 2020 election. pic.twitter.com/Ti6kWrvmHr

And here’s my retweet/reply to her nonsensical brown-nosing:

Yes, Debbie, we, being Americans, have the perfect right to "influence the election" and "attack @realdonaldtrump" for his utter failure and the death 50,000 Americans and counting. Unlike the Chinese and Russians whom you seems fine helping your "boss" to re-election. https://t.co/vxNSVoWJ9j

This vote illustrates that Trump’s hold on the GOP caucus has not slackened one bit, despite his provable and repeated lying about the pandemic, and his falling approval numbers. Nothing short of a total rout in the coming election seems likely to shake loose Trump’s grip on the balls and throats of his party.