I have been an election observer for many years, working with The Lawyers’ Committee for Civil Rights under Law or the Democratic Party. There are very strict guidelines on what observers can and cannot do.

The goal of election observers is to assist in resolving any problems that might arise, e.g., helping voters find the right polling location, and making sure that poll workers are assisting voters in resolving any issues to allow them to cast a ballot.

In all the years I have been a poll observer, it has never been my role to challenge a voter on his or her eligibility to cast a vote.

This is something that the Republican Party, however, has engaged in, as well as Republican Party affiliated organizations such as the notorious True the Vote with a “horrendous record of filing inaccurate voter registration challenges.” A Reading Guide to True the Vote, the Controversial Voter Fraud Watchdog.

Donald Trump, who has sought to delegitimize this election by asserting that “the only way he can lose” is if the “system is rigged” and there is “voter fraud,” Trump urges Pennsylvania backers: Don’t just vote, watch for signs of ‘cheating’ on election day, is now rolling out his own “election observers,” who are likely to follow the True the Vote model.

The Washington Post reports, How Donald Trump’s bizarre voter-watch effort could get the GOP in trouble:

After telling an audience in Altoona, Pa., that he would seek their help in policing the polls in November to root out voter fraud — something that even the state of Pennsylvania has noted doesn’t exist in any meaningful way — Donald Trump’s campaign nationalized the effort on Saturday morning. Now eager Trump backers can go to Trump’s website and sign up to be “a Trump Election Observer.” Do so, and you get an email thanking you for volunteering and assuring you that the campaign will “do everything we are legally allowed to do to stop crooked Hillary from rigging this election.” 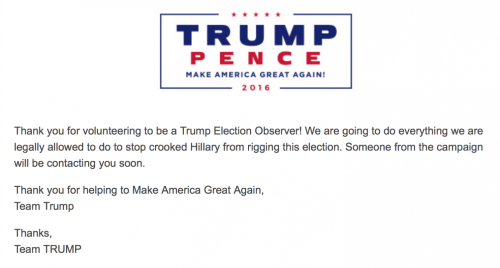 The only question is, will Trump election observers be issued brown shirts? Or black shirts? They are sure to wear the “T” Trump arm band.

There are any number of problems with this, again starting with the fact that the frequency of in-person voter fraud in elections is lower than getting five numbers right in the Powerball. But there’s a potentially bigger legal problem noted by election law expert Rick Hasen of the University of California at Irvine: Trump’s unnecessary effort could be violating a prohibition against voter intimidation that applies to the Republican Party (I recommend you read Hasen’s post).

In 1981, the Republican Party rolled out a voter-integrity effort in New Jersey that mirrors what Trump demanded in Altoona. As described in a legal ruling (.pdf) about the prohibition:

The RNC allegedly created a voter challenge list by mailing sample ballots to individuals in precincts with a high percentage of racial or ethnic minority registered voters and, then, including individuals whose postcards were returned as undeliverable on a list of voters to challenge at the polls. The RNC also allegedly enlisted the help of off-duty sheriffs and police officers to intimidate voters by standing at polling places in minority precincts during voting with “National Ballot Security Task Force” armbands. Some of the officers allegedly wore firearms in a visible manner.

(Trump in Altoona: “We have to call up law enforcement. And we have to have the sheriffs and the police chiefs and everybody watching. … The only way they can beat it in my opinion — and I mean this 100 percent — if in certain sections of the state they cheat, okay?”)

The Democrats sued, and in 1982, the two parties agreed to a system under which the Republican National Committee agreed to refrain from a number of tactics that could be used to intimidate voters. That consent decree, as it is called, has been modified a number of times, often in response to efforts to challenge the ability of Democratic voters to vote, occasionally targeting black voters specifically.

In his blog post, Hasen points specifically to the fifth prohibition in the decree, Part E, which keeps the party from “undertaking any ballot security activities in polling places or election districts where the racial or ethnic composition of such districts is a factor in the decision to conduct, or the actual conduct of, such activities there and where a purpose or significant effect of such activities is to deter qualified voters from voting.” Trump’s pointed reference to how voters in “certain sections of the state” were likely to cheat was almost certainly a reference to a debunked claim that the vote was rigged in predominantly black parts of Philadelphia.

We spoke with Hasen by phone on Saturday morning, and he explained why Trump’s apparent effort could be legally tricky.

“It’s at least enough innuendo based on the other things that Trump has said in the campaign, that you could make the case that this would fall under Part E, that kind of intimidation aimed at or based on minority status or where they are in the state and who they are,” Hasen said. “I think the harder question is the question of agency.”

Let’s step back a bit. Political campaigns often send observers to polling places as part of get-out-the-vote efforts, since states often allow campaigns to track who has and hasn’t already voted. Campaigns spend months identifying voters who support their candidates, and checking to make sure they’ve voted on Election Day allows campaigns to then send volunteers to go and encourage those supporters who haven’t yet cast a ballot to do so. To track that information, though, observers have to abide by certain rules that vary in different places.

Observers can see who’s been checked off the already-voted list but may not challenge voters. Vote tallying may be observed but not interfered with. And: “The use of force, violence, tactic of coercion or intimidation to compel a person to refrain from voting at any election is a felony punishable by imprisonment in state prison for up to three years.”

The consent decree extends the list of prohibitions for the party. But is Trump the same in this regard as the party? That’s the agency question Hasen raises. Trump is fundraising with the Republican Party. What’s more, Trump has spoken in the past of outsourcing his voter-turnout effort to the Republican Party, though it’s not clear the extent to which he will or can.

“If I were the lawyer for the [Democratic National Committee], I would try to make the case that Trump is acting as an agent for the RNC and the RNC is acting as an agent of Trump since they have a joint fundraising committee and they are working together,” Hasen said. “I can’t tell you how a court would rule on this question, but I certainly think the Democrats could make that case.”

If the Democrats challenge this effort, and if Trump is determined to be an agent of the Republican Party, the court could find that Trump’s effort violates the consent decree. That could extend the consent decree, which expires in December 2017, for another eight years, Hasen says, and anyone found in knowing violation of it could be held in contempt of court.

That’s a lot of ifs — particularly given that we don’t really know what Trump’s trying to do by enlisting these volunteers.

“I think the question is: What would he be organizing the election observers to do?” Hasen asked. “He is gathering names based on the idea that these observers are going to stop ‘Crooked Hillary’ — his words — from ‘rigging’ — his words — the election. That to me does not sound like observation or GOTV [get out the vote].”

Campaigns often use made-up reasons to collect information on voters; think of all of those “sign so-and-so’s birthday card!” emails you get. If Trump is truly collecting names solely to use for some election-observation system, that’s a big waste of his campaign’s time and energy. (A hint that it’s not about that: Once you sign up, you’re redirected to a donation page.) If he’s using the idea of voter fraud just to collect email addresses, that’s odd, too.

“I wouldn’t put it past Trump to say, ‘Oh, well, this was just a way of gathering names for our fundraising efforts. We didn’t really mean it, that we’re going to do this election observation.’ I wouldn’t put anything past Trump these days,” Hasen said. “Some people have suggested that’s what this is. Well, if that’s what this is, I’d be relieved.” Though, Hasen notes, Trump’s campaign lawyer should know better than using such a risky rationale for collecting email addresses.

We shouldn’t allow the legal question to let us lose sight of the darker implications of what Trump could be suggesting.

“One of the things that this can do is get rogue people riled up. Trump sets the fuse and lets someone else do the explosion,” Hasen said. “It strikes me as a very dangerous thing to be suggesting, because it does lend itself to the possibility of violence at the polls.”

“It just strikes me,” he said, “as exactly the kind of dirty tricks why the RNC consent decree was put in place in the first place.”

Trump’s plan raises the specter of what happened in Tucson in 2006, when anti-immigrant haters Russell Dove and Roy Warden showed up at the Iglesia Bautista church, 4502 S. 12th St. to harass and intimidate Spanish-speaking voters by using an “English-only” petition to screen for “illegal immigrants” trying to vote, videotape them, and post their likenesses on the Internet (Warden was armed with a gun). Details: Latino/a Voters Harassed in Tucson, AZ.

Is this what we can expect from Trump election observers?

There are a number of organizations that do poll observing to discourage voter intimidation at the polls. You can volunteer your time to be a poll observer with one of these organizations on election day.

Arizona’s 54th Legislative Session Ends: The Good, the Bad & the...