Senator Orrin Hatch, who so thoroughly disgraced himself during the Anita Hill hearings, suggested Dr. Blasey was “mixed up” (as in “a little bit nutty.”)

Those promoting Brett Kavanaugh concocted a doppelgänger theory to defame a classmate of Brett Kavauagh by accusing him of a criminal sexual assault. Conservative Pundit Points Finger at Another Man to Deflect from Kavanaugh (Ed Whelan has been involved in helping to advise Kavanaugh’s confirmation effort and is close friends with Kavanaugh and Leonard Leo, the head of the Federalist Society, who has been helping to spearhead the nomination); Kavanaugh ally says he did not communicate with White House or Supreme Court nominee about theory of another attacker. (In the wake of Ford’s allegation, Kavanaugh told White House officials and Republicans on Capitol Hill that it was potentially a case of mistaken identity, according to people who heard his comments or were familiar with the discussions.) Nothing suspicious there.

Senate Judiciary Committee Chairman Senator Chuck Grassley, who also thoroughly disgraced himself during the Anita Hill hearings, has feigned that he wants Dr. Blasey to testify while doing everything in his power to make certain that she does not, or that she testifies under terms that are neither fair nor impartial. Grassley has issued threats and arbitrary deadlines to intimidate Dr.Blasey. His “take it or leave it” approach is dismissive of Dr.Blasey’s credible claim. “Let’s hear what the little lady has to say – blah, blah, blah – then let’s vote to confirm.”

Sen. Grassley threatened to call a committee vote on Monday unless he got a definitive answer on testimony from Dr. Blasey by 10:00 p.m. on Friday. As Kerry Eleveld of Daily Kos notes, “the letter from the lawyer for Dr. Blasey Ford, Debra Katz, is a master class in exposing the bullying tactics Grassley and the GOP have employed all week in the ongoing negotiations over whether Ford would ultimately testify.” 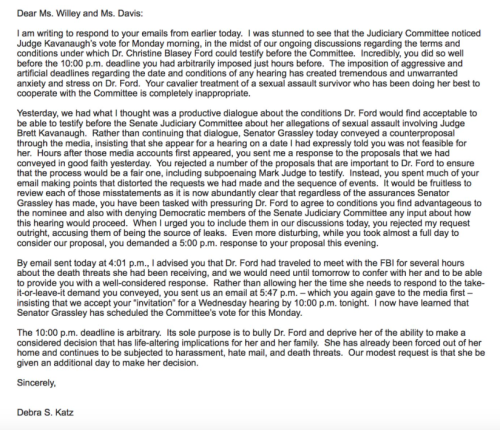 In response, Sen.Grassley Extends Negotiation Deadline for Christine Blasey Ford until 2:30 p.m. Saturday to negotiate the terms of their client’s testimony before the panel next week.

In an email to the lawyers, aides to Mr. Grassley said that they “absolutely must hear by 2:30 p.m.” that Dr. Blasey has agreed to their terms for testifying. It was not clear precisely what those terms were.

Well, we do know that it does not include testimony from the other individual Dr. Blasey said was in the room when she was assaulted, Mark Judge, and two other boys who were at the party whom Dr. Blasey has identified to the Senate as possible corroborative witnesses. Sen. Grassley is not interested in getting to the truth of the matter, he just wants to be done with Dr. Blasey so Republicans can move to confirm Brett Kavanaugh. It does not matter what Dr. Blasey has to say or that she may have corroborative witnesses.

This was openly confessed by the ringleader of this miscarriage of justice, Senate Majority Leader Mitch McConnell, who is on the verge of realizing his dream of ending democracy in America. Sen. McConnell appeared before the so-called “Values Voters Summit” yesterday — composed of Christian Nationalists and Dominionists who want to replace democracy with a theocracy so that they can impose their religious dogma on their fellow Americans — and flatly declared ‘Kavanaugh will be on the U.S. Supreme Court’: McConnell just erased any doubt about Republicans’ intentions to hear Ford out:

A big reason Judge Brett M. Kavanaugh’s accuser says she doesn’t want to testify in the Senate without first having her claims investigated by the FBI is she doesn’t think she’ll be treated objectively and fairly by politicians.

“Here’s what I want to tell you,” McConnell said Friday morning at a summit for social conservatives. “In the very near future, Judge Kavanaugh will be on the U.S. Supreme Court. So, my friends, keep the faith. Don’t get rattled by all this. We’re going to plow right through it and do our job.”

There is no other way to read McConnell’s comment other than that the Ford allegation doesn’t matter to him[.]

Put another way: A woman accused a Supreme Court nominee of drunkenly pinning her to a bed, groping her and covering her mouth when she screamed when they were in high school decades ago. She provided therapist notes from well before Kavanaugh was such a public figure. She took a polygraph test. She is willing to undergo an FBI investigation — unlike Brett Kavanaugh — and testify under oath before the Senate. These are all moves that outside experts say make her story credible, and yet here is the most powerful politician in the Senate appearing to brush all of that aside because he wants to “do [his] job.”

Republicans simply do not care. President Trump made clear Friday that he doesn’t believe Ford and doesn’t really think she should be heard. Nor does any Republican senator. Women simply do not matter.

The party of privileged white male patriarchy disdains women and treats them as second-class citizens. They want to put a political operative disguised as a judge on the Supreme Court to overturn Roe v. Wade (abortion) and Griswold v. Connecticut (contraception).  The GOP’s Christian Right base of Christian Nationalists and Dominionists, who also maintain a privileged white male patriarchy, demand it. Brett Kavanaugh is the least popular Supreme Court nominee in 30 years, and they are willing to destroy the credibility of the Supreme Court in order to get what they want.

It is authoritarian GOP abuse of power. The GOP is unfit to govern in a democracy. They must be removed from office en masse in November.