You would think that after his Nike debacle over the long July 4th holiday — he now is denying that he ordered the Arizona Commerce Authority to rescind a $1 million incentive, “are you going to believe me or your lyin’ eyes?” —  that our damn fool Governor Ducey would want to lay low for awhile and keep his mouth shut. Apparently not.

Sylvia Allen, R-Snowflake, has faced criticism following a speech made to Republicans in Phoenix earlier this month.

Allen said America would “look like South American countries very quickly” and warned that immigrants were “flooding” the United States faster than they could “learn the principles of our country,” according to audio published by the Phoenix New Times on July 26.

She referred to the response and coverage of her comments as a “verbal lynching” in a conversation with Jeff Oravits, a conservative radio host, on Monday.

“If we don’t teach them (immigrants) properly, we will end up like Venezuela, which was the reference to South America,” Allen told Oravits.

“I think the things I brought up, even in that just two minutes of that speech, are questions that deserve to be debated, deserve to be discussed,” she said.

“They need deserved this kind of attention without, without attacking me, calling me racist, without trying to silence me. And I think that it’s verbal lynching that’s taking place to silence us and not allow us to have these kind of debates.“

Allen also told Oravits she would not resign and planned to run for re-election.

“I think the term ‘racist’ has become a label too often deployed by the left [and] Democrats in this country simply to try to silence and punish and suppress people they disagree with — speech they don’t want to hear,” Miller told host Chris Wallace on “Fox News Sunday.”

The Civil Rights Movement used the tactic of “naming and shaming” to call attention to the horrific abuses of state-sanctioned racial segregation and white terrorism against African-Americans. In the Trump era, too many white Americans are immune to feeling any shame, and proudly display their racism.

In an interview with the Arizona Daily Sun, Allen again insisted her comments were not racist:

Allen described the backlash to her comments as a “verbal lynching” of her and explained that she was trying to communicate a concern that immigrants are not being taught American values.

“We have to make sure we are also teaching this, to make sure they assimilate,” Allen told the Daily Sun. “I’m definitely not racist.”

Allen explained that for her, assimilating means new immigrants understand “what the culture, tradition and government of America is all about,” adding other important aspects of assimilation are speaking English and having a house and a job.

Allen said she was referencing communist Venezuela when she worried about immigrants making the United States look like South America.

OK, let me stop you right there, lady. For a white woman making racist statements to repeatedly complain about “lynching” as if you are the victim is yet another insult to African-Americans who actually were subject to the state-sanctioned terrorism of lynching in America. I suggest that you make a pilgrimage to the Legacy Museum and the National Memorial for Peace and Justice in Montgomery, Alabama to educate your ignorant ass about actual lynching. 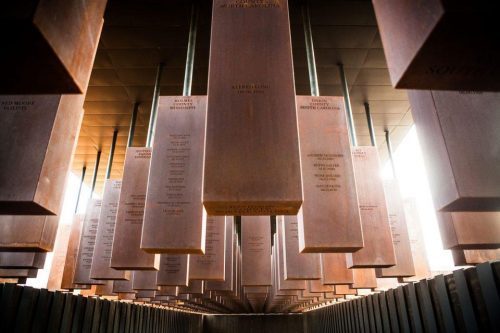 Each of the 800 corten steel monuments, one for each county in the United States where a racial terror lynching took place, is engraved with the names of the lynching victims in that county. In the report, Lynching in America: Confronting the Legacy of Racial Terror, the Equal Justice Institute  documented more than 4400 lynchings of black people in the United States between 1877 and 1950. EJI identified 800 more lynchings than had previously been recognized.

And take our damn fool Governor Ducey with you.

Some critics have tried to draw a parallels between Allen, R-Snowlflake, and former state Rep. David Stringer. Ducey rejected that.

“Come on — Sylvia Allen is not David Stringer,” Ducey told reporters after an event with Microsoft. “She disavowed — she disavowed her comments and says she has love in her heart for every person. Like I said, I’ve worked with her for years, and that’s consistent.”

Allen didn’t disavow her comments, as Ducey said. She did apologize to “anyone who has been hurt by my words,” but insists they were misconstrued.

So the classic non-apology apology. Good enough for Governor Ducey.

Stringer, a Prescott Republican, faced calls to resign from Republicans, including Ducey, after a recording of racist comments surfaced in 2018. He ultimately resigned over allegations that he paid for sex with children.

Different responses to this controversy

The response to Allen from Republicans is markedly different to that of Stringer, who in June 2018 called immigration “an existential threat,” saying “there aren’t enough white kids to go around.”

In the days after a video of Stringer’s comments surfaced, Ducey, the Arizona Republican Party, pro-immigrant groups, Democrats, the Arizona Chamber of Commerce and others condemned the remarks and called for his resignation.

Democrats have condemned Allen’s remarks, including Felicia French, a Democrat who is running for the Senate seat.

“Her inflammatory speech continues the divisive ‘us vs. them’ narrative that is tearing our communities apart, rather than building them up,” French said in a statement Monday.

The Arizona Education Association on Tuesday called for Allen to be removed as chairwoman of the Senate’s Committee on Education. ProgressNow Arizona also started a petition for state Senate President Karen Fann, R-Prescott, to remove her as chair.

In a statement Tuesday, Joe Thomas, the president of the Arizona Education Commission, called on Senate leadership to remove Allen as the chairwoman of the Senate Education Committee following her comments that he said ”spread fear and intolerance.”

“Elected leaders who are elevated to key roles in our state must represent everyone and strive to be inclusive of all voices. We embrace our differences as a value in Arizona,” Thomas wrote in a statement. “Senator Allen has disqualified herself and we ask for her immediate removal.”

Democratic candidate for state Senate Felicia French also chimed in on the controversy via Twitter, denouncing the comments and writing, “Diversity is what makes America great.”

“I was proud to serve with countless immigrants over my 32 years in the military. Immigrants and their children also founded nearly 50% of Fortune 500 companies, employed 13.5 mil people and created $6.1 trillion in annual revenue in 2018,” French’s tweet read.

Both Wendy Rogers and Rep. Bob Thorpe, both of whom are Republicans hoping to win Allen’s Senate seat in 2020, denounced the remarks, with Rogers calling it a “very racist statement.”

Thorpe said Allen’s “racially insensitive” comments saddened and confused him, calling the district Allen represents and the state of Arizona a melting pot of cultures and nationalities.

So we’re all agreed then that Sylvia Allen is a racist, except for our damn fool Governor Ducey.

This week, Phoenix New Times is wondering why no prominent Republicans – or practically ANY Republicans – have condemned Allen’s remarks or called for her resignation.

The exception was Allen’s Republican primary challenger in the 2020 election, Wendy Rogers.

Wondering why everyone else is so quiet is a legitimate question, and easy to answer:

President Donald Trump seems to have decided his campaign for reelection will be based on racism, xenophobia, sexism, nationalism and any other negative, divisive characteristic.

Hell, it worked for him once.

When Republican U.S. Sen. Martha McSally dared to disagree with Trump’s threat to impose tariffs on Mexican goods, Ward said, “My wish is that if somebody disagrees with the president from our side, Martha or any of our four Republican congressmen, I wish that they would just be quiet.”

They’re not afraid of Ward.

They ARE afraid of Trump, however.

And any Republican who criticizes Allen over her remarks is going to be asked an embarrassingly and unanswerable follow-up question:

If what Allen said is wrong how could you not criticize, if not condemn, the racist comments President Donald Trump made against four congresswoman of color or about Rep. Elijah Cummings, an African-American?

The only honest answer any of them could give is, “Because Trump scares me.”

So they stay silent. Or worse, they go out of their way like Gov. Doug Ducey and defend Allen.

And so, unlike Stringer, Allen gets a mulligan.

And all of our elected Republicans commit, silently, to basing their own reelection campaigns on a tacit acceptance of – if not outright participation in – racism, xenophobia, sexism, nationalism and any other negative, divisive characteristic.

You stepped in it, you wear it.