This comes as no surprise, it was the obvious cautious choice. Hillary Clinton Selects Tim Kaine, a Centrist Senator From a Swing State, as Running Mate:

Hillary Clinton named Senator Tim Kaine of Virginia to be her running mate Friday, according to a senior campaign official, selecting a battleground state politician with working-class roots and a fluency in Spanish, traits that she believes can bolster her chances to defeat Donald J. Trump in November.

Mrs. Clinton decided that Mr. Kaine, 58, a former governor of Virginia who sits on the Senate Foreign Relations Committee and speaks fluent Spanish, had the qualifications and background and the personal chemistry with her to make the ticket a success. 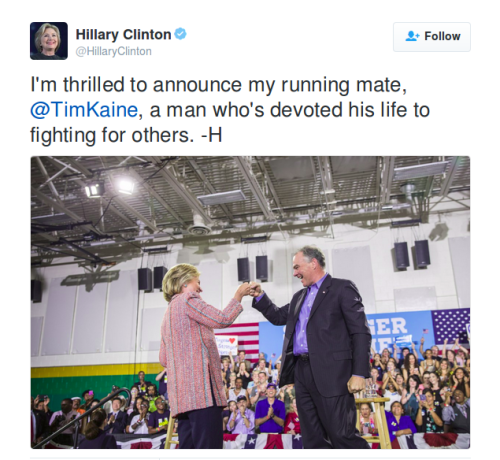 In the end, Mrs. Clinton, who told PBS she is “afflicted with the responsibility gene,” avoided taking a chance with a less experienced vice-presidential candidate and felt no political need to push the historic nature of her candidacy by adding another woman or a minority to the ticket.

Mrs. Clinton and Mr. Kaine have similar centrist positions on foreign policy, education and criminal justice and they are said to share an easy rapport and a love of granular policy-making. “I do have a fondness for wonks,” Mrs. Clinton said in the PBS interview.

Asked whether Mr. Kaine was boring, Mrs. Clinton said “I love that about him.” She added, “He’s never lost an election.”

Known as a pragmatic governor and senator, Mr. Kaine could help Mrs. Clinton appeal to independent voters and moderate Republicans displeased with Mr. Trump. But he could also turn off some liberal Democrats with his support of free trade agreements, which Senator Bernie Sanders of Vermont criticized to great effect in his nominating fight against Mrs. Clinton.

The son of a welder who owned a small metalworking shop, Mr. Kaine, a Roman Catholic, grew up in the Kansas City area. He attended a Jesuit boarding school and took a break from law school at Harvard to spend time as a Catholic missionary in Honduras, an experience that his family has said shaped him and helped him become fluent in Spanish.

Mrs. Clinton is expected to formally introduce Mr. Kaine as her running mate during a campaign swing through Florida, either at a rally at the state fairgrounds in Tampa on Friday or on Saturday at Florida International University in Miami, which has a large number of Hispanic students.

Mr. Kaine worked on fair housing and civil right issues as a lawyer. He was elected to the city council in Richmond, Va., in 1994, then proceeded to climb the ranks of elected office in the state. He became city’s mayor in 1998, the state’s lieutenant governor in 2002 and its governor in 2006. He also served as chairman of the Democratic National Committee.

Mrs. Clinton’s choice of Mr. Kaine underscores the changing demographics of Virginia, with its growing urban and minority populations.

Mr. Obama defeated John McCain in the state by more than six percentage points, the first time since Lyndon B. Johnson’s victory in 1964 that the state had voted for a Democratic presidential nominee. An NBC News-Wall Street Journal poll from July 15 shows Mrs. Clinton ahead of Mr. Trump for the state’s 13 electoral votes by nine percentage points.

Sen. Kaine is also from a state with a Democratic governor who can appoint a Democrat to fill his seat if elected. That was a key factor for Senate Minority Leader Harry Reid.

UPDATE: Arizona Senator Jeff Flake is on board. Where’s Johnny?