The House of Representatives passed its policing reform bill, dubbed the George Floyd Justice in Policing Act aka the Justice in Policing Act of 2020, Thursday evening, in a vote of 236-181. Three Republicans, Brian Fitzpatrick of Pennsylvania, Will Hurd of Texas, and Fred Upton of Michigan, joined with Democrats, making this a bipartisan effort to at least begin to hold police accountable for acts of brutality and racism. 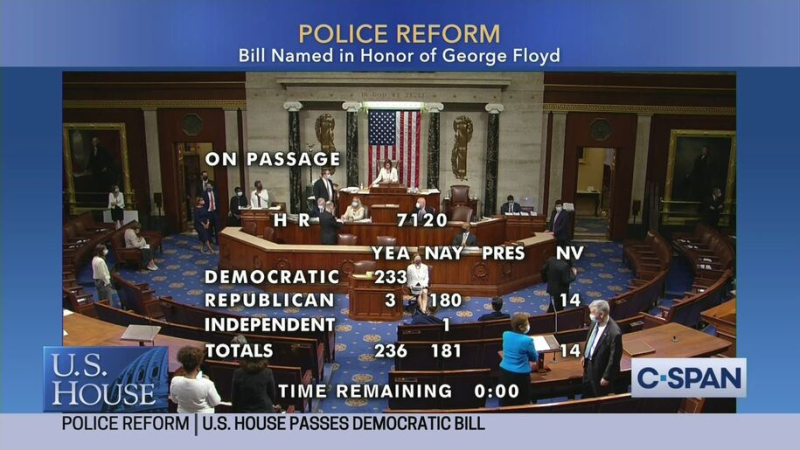 This proves my point that Republicans were not serious about police reform. They just wanted a sham bill in the Senate to take the issue off the table, and failing that, to propagandize against Democrats for having voted down their sham bill.

“Today with the George Floyd Justice in Policing Act, the House is honoring his life and the lives of all those killed by police brutality and pledging: Never again,” House Speaker Nancy Pelosi said on Thursday, before the vote. “When we pass this bill, the Senate will have a choice: to honor George Floyd’s life or to do nothing,” she added.

Senate Majority Leader Mitch McConnell’s choice will almost undoubtedly be to do nothing. McConnell has already shown his hand with his sham vote on Tuesday. He put up a toothless, meaningless police “reform” bill on the pretense that Black lives matter to him, and the very same day advanced an anti-voting rights, anti-civil rights judge to a key appeals court.

McConnell’s only intent with the Senate bill he offered—drafted by the Senate’s only Black Republicans, South Carolina’s Tim Scott—was to put the Democrats in the position of voting against police reform. He wasn’t going to chance doing anything that would actually hold law enforcement accountable, that would actually save Black lives. The bill was full of a lot of words about accountability, but no actual policies to enforce it. Because if he offered a bill that did anything, there would be a chance that Democrats would vote for it and it would pass. He worked very hard to make sure that couldn’t happen by refusing to have the bill go through regular order in the Judiciary Committee, by refusing to allow any Democratic input into the bill.

The Senate bill, “did nothing. It took our language and defanged it,” Pelosi said in a press conference Friday morning. “We’re saying no chokeholds. The President’s saying, well maybe some time. Should we agree on the number of chokeholds? Would that a good compromise?” She continued, “Policy has an impact, and we can prevent future deaths if we ban the chokeholds. I’m fully committed to that.”

The “Grim Reaper” of the “legislative graveyard” in the Senate, Mitch McConnell, has said the Democratic bill, which has 227 co-sponsors in the House and 36 in the Senate, is “going nowhere” in his chamber … because “states rights!”

The House bill now goes to the Senate, where it will sit atop a mile-high pile of bills from the House that the Grim Reaper of the Senate will refuse to ever bring to the floor.

Enough with Mitch McConnell’s bullshit gamesmanship. It’s time to send him back to his old Kentucky home.

Trump death cult surrenders to coronavirus, ‘Learn to live with it’