How the Senate health care bill would affect Arizona

How the Senate health care bill would affect Arizona

Howard Fischer reports on an analysis by Arizona’s AHCCCS office. Analysis: Senate health-care plan could cost Arizona $2.9B or more: 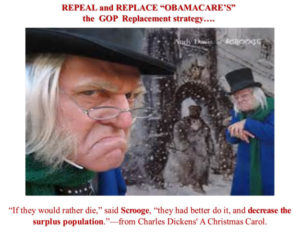 The new Senate health-care plan would cost Arizona at least $2.9 billion between next year and 2026 — and perhaps as much as $7.1 billion — according to a new analysis by the Ducey administration.

Or the state could avoid most of those costs simply by cutting off health care for more than 400,000 who got coverage in 2013 when Arizona took advantage of a provision in the Affordable Care Act — the law Congress is working to repeal.

The analysis by the Arizona Health Care Cost Containment System, the state’s Medicaid program, shows the Senate proposal is only marginally better than the one approved by the House. That has an Arizona price tag of $3.3 billion over the same period.

The $2.9 billion is just in lost federal dollars that provide care for nearly 320,000 childless adults with income below the federal poverty level, about $11,800 a year for a single person. Plus, there are another 82,000 adults considered the “working poor,” earning up to $16,400 a year, whom the feds would no longer fund.

That’s only a piece of the picture.

If federal funding goes away, the assessment on hospitals that lawmakers approved in 2013 to pay the state’s costs for those people automatically self-destructs. That means the loss of another $2 billion over the same period, money the taxpayers would have to pick up.

Our lawless Tea-Publican legislature would pass “emergency” legislation to make sure that this does not happen.

And another provision in both the House and Senate bills would limit federal payments to states for other Medicaid recipients. AHCCCS officials said that would cost the state another $2 billion through 2026.

There is a way for the state to avoid close to $4.9 billion of those costs: Scale back its Medicaid program.

“If you’re willing to give up coverage on the 400,000 people, most of that (cost) goes away,” said AHCCCS Director Tom Betlach. But there’s also a political reality: Some of those could be classified as truly needy.

That includes 28,900 people who have cancer or tumors and another 80,800 with mental-health problems, including about 11,000 with serious mental illness. And a third of the population is 50 and older — but not old enough to qualify for Medicare.

And Betlach said the hospital assessment that would disappear also pays for care for some others, including about 130,000 parents who also get coverage because their children are enrolled in a separate Kids Care program.

But Betlach said there’s more at stake than the health of those who would lose coverage.

Arizona hospitals agreed to fund the state’s share of the costs when coverage was expanded in 2013 for what could be considered self-serving reasons: More people with health insurance means fewer people turning up at their doors needing treatment but with no ability to pay. In fact, the assessment was crafted so every hospital chain would pay less than what had been their “uncompensated care.”

Betlach said if hospitals are again hit with those costs, some could go under.

Since 2010, at least 79 rural hospitals have closed across the country, and nearly 700 more are at risk of closing. These hospitals serve a largely older, poorer and sicker population than most hospitals, making them particularly vulnerable to changes made to Medicaid funding.

The GOP’s American Health Care Act would cut Medicaid — the public insurance program for many low-income families, children and elderly Americans, as well as people with disabilities — by as much as $834 billion. Even more could lose coverage under the budget proposed by President Trump, which suggests an additional $610 billion in cuts to the program.

So are lawmakers and the governor willing to make those coverage cuts?

“Everybody knew this day was coming,” said House Majority Leader John Allen, who opposed the 2013 legislation that both restored coverage for single adults who had been cut from the program two years earlier to balance the budget and expanded eligibility beyond the federal poverty level. He said it’s “an open question” whether the Republican-controlled Legislature will choose to find the billions needed or simply repeal the 2013 law.

No, it is not. Our lawless Tea-Publican legislature would vote to repeal what is not automatically triggered with the loss of federal funding under Gov. Jan Brewer’s Medicaid expansion plan.

“There are two very well-established sides on this,” Allen said of the issue. “The side that will probably win the day is the one that is able to convince the public that there is no other choice.”

And where does Allen stand?

“I fall on the ‘you should never have done this and we should back away from it.,’ ” he said.’

In other words, “Perhaps they should die and decrease the surplus population.”

Perhaps Arizonans need to replace our amoral and inhumane Tea-Publicans who only care about giving tax breaks to the wealthy and corporations, regardless of how many of their constituents will suffer and die.

Gubernatorial press aide Daniel Scarpinato sidestepped questions of whether his boss favors spending more dollars or cutting coverage, saying the hope is to keep it from coming to that. Ducey has been in contact with Sens. Jeff Flake and John McCain, expressing his concerns.

“The governor is recommending amendments to the bill to protect our budget and those currently covered,” Scarpinato said.

Then there’s the legal question of whether the state can legally scale back coverage.

A 2000 ballot measure requires AHCCCS to provide coverage to everyone up to the federal poverty level. And because it was approved at the ballot, it cannot be altered or repealed by the Legislature.

“The voters of Arizona were very clear that they wanted this population covered in our Medicaid program,” said state Rep. Heather Carter, R-Cave Creek, who chairs the House Health Committee.

But lawmakers, facing a $1.7 billion deficit in 2011, did find a loophole: The coverage was contingent on the Legislature appropriating “available sources” of revenue to supplement other dollars. And the state Court of Appeals ruled that the question of whether there is sufficient cash is political, saying judges would not “second-guess the complexities of decision-making and priority-setting that go into managing the state’s budget.”

It was the passage of the federal Affordable Care Act that allowed Arizona to restore coverage. Betlach said if the state once again tries to rescind coverage, “You can assume it would probably be litigated again.”

Let’s not forget that our lawless Tea-Publican legislature has also refused to fund inflation adjustment funding for school districts, resulting in a lawsuit, and the legislature is currently being sued for its failure to adequately fund capitial improvements to school districts, in violation of the law and a settlement agreement.

When our lawless Tea-Publican legislature does not want to pay for education and health care, they simply choose to ignore the law and go to court to create a “constitutional crisis.” They dare the courts to “make me” spend money the law requires, and as noted above, the Court of Appeals in one case balked.

This refusal to comply with the law and court orders is what is occurring in the state of Washington right now. At the brink — Legislature has 9 days to stave off state shutdown:

Gov. Jay Inslee has called a divided Washington Legislature into its third special session of 2017, in an 11th-hour bid to pass a two-year budget and stave off a full or partial shutdown of state government.

“The clock is running out,” Inslee said Wednesday. “There are nine days remaining in the current fiscal year.” The governor added that he would not accept a temporary budget to bide over the failure to agree on a biennial spending plan.

* * *
The budget is lawmakers’ basic duty. The Washington State Supreme Court has turned it into hardship duty.

The Legislature is under court order to comply with a 2012 ruling, the McCleary case, which orders the state to bear full cost of K-12 education, including teacher salaries and school employee pay. The Supreme Court has told legislators to come up with a McCleary solution before they adjourn this year, ready to go into effect at the start of the 2018 school year.

The McCleary solution must be part of a two-year budget that finances state government, including underfunded mental health services, the state prison system, state worker contracts, and child care.

In his State of the State speech, Gov. Inslee proposed about $3 billion in new taxes, notably imposing a capital gains tax on high-income earners. The Republicans have furiously opposed a capital gains tax, and put the proposal to political use. They argued that such a tax is the camel’s nose under the tent toward the goal of adopting of a state income tax.

Washington has, according to many studies, the nation’s most inequitable tax system. By relying on a sales tax, the state makes low- and middle-income residents pay a far higher percentage of their income than the rich. The burden is greatest at the bottom.

Apparently, the capital gains tax, affecting money from the sale of stocks and bonds, is off the table. The Republicans have apparently backed off from jacking up Seattle property taxes, however much they dislike the city.

The political stakes are high.

It is hardly a stretch of the imagination that our Koch-bot Governor Ducey and our lawless Tea-Publican legislature would not engage in the same defiance of court ordered education funding or health care funding.