In 2017, the state of Nevada became the 36th state to ratify the Equal Rights Amendment. 38 states are required for ratification.

The Illinois Senate on Wednesday voted to ratify the Equal Rights Amendment to the U.S. Constitution, renewing a push from decades ago amid the #MeToo movement to guarantee that rights can’t be denied because of a person’s sex.

The vote came about 36 years after the amendment appeared to die after just 35 states ratified it, three short of what was needed by the 1982 deadline. That means Illinois’ approval could be largely symbolic. Still, advocates have pushed for a “three-state solution,” contending Congress can extend the deadline and the amendment should go into effect if three additional states vote in favor.

Note: First enacted in 1972 by Congress, the ERA legislation required that the measure be ratified by three-fourths of the states (38) within seven years. That deadline was later extended 10 years to 1982. There was federal court litigation over the deadline extension at the time. But the U.S. Constitution contains no time limit for ratification of constitutional amendments. In fact, subsequent to the ERA the 27th Amendment to the Constitution prohibiting immediate congressional pay raises was ratified 203 years after its introduction. This called into question the soundness of  earlier federal court decisions on the ERA deadline. It is still a contested legal issue. Congress can also vote to remove the deadline language, and a bill has been introduced to do so.

The amendment passed on a vote of 43-12, with no debate on the Senate floor. It now heads to the House, where sponsoring Rep. Lou Lang, D-Skokie, says he is working to build support but warned it’s far from a “slam-dunk.” The House and Senate each have voted in favor in the past, but it has yet to clear both in the same year.

All 12 lawmakers who voted against the bill Wednesday are Republicans. Just one woman, Rep. Jil Tracy of Quincy, voted no. She said afterward that the focus should be on enforcing equality laws already on the books, and questioned the “viability” of passing the amendment decades after the deadline.

NOTE: Nearly half of the states have a version of the ERA already written into their state constitutions. Arizona is not one of them. I continue to advise ERA supporters to amend the Arizona Constitution as well, either through legislation or by citizens initiative.

Prior to the vote, the Senate’s newly formed bipartisan women’s caucus announced it was supporting the effort.

“You are looking at a group of women who really, we have our differences on many issues, but we respect each other and together we are very committed to the idea of advancing and promoting legislation and policy that is good for women,” said Sen. Karen McConnaughay, a Republican from St. Charles. “This is the first piece of legislation our caucus has endorsed, passage of the Equal Rights Amendment, and I think it’s fitting this is the first piece.”

Lang, the House sponsor of the amendment, said he would push for a vote to ratify it “as soon as possible.” He said he was working to combat opposition from conservative groups such as the Illinois Family Institute, which contends the ERA could lead to abortion restrictions being overturned since it’s a medical practice that applies only to women.

“We are trying to dispel those myths, and after we do so we think we will have the votes to pass this,” Lang said. “But it’s not going to be a slam-dunk, and so we have a lot of work to do over the next days to make this happen.”

Lang needs 71 votes to win approval for the constitutional amendment, more than the usual 60 required for typical laws. That means he’ll need the support of some Republican lawmakers, but the bill doesn’t need the signature of Gov. Bruce Rauner. A spokeswoman for the governor didn’t respond to a question about whether he favors it.

If Illinois does in fact ratify the ERA, that positions Arizona to become the 38th and final state to ratify the ERA and put it in the U.S. Constitution. It will likely take a Democratic state legislature in Arizona in order to do it. Make it happen. 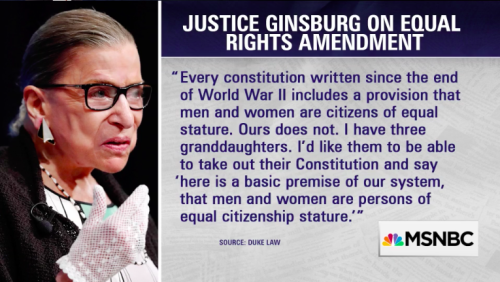