Don’t shed a tear for Senator John McCain. As he spends his dying days enjoying the best health care the government can buy, he is in favor of gutting health insurance for 11.8 million Americans who get health insurance via the Affordable Care Act. 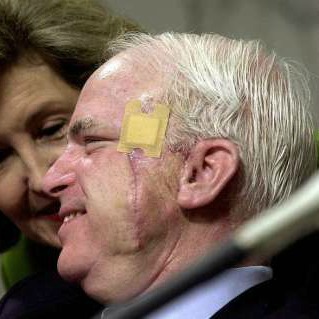 Sen. John McCain was diagnosed with brain cancer on July 19, 2017. For him, healthcare is free.

McCain became a quasi-hero last year when he voted against the “skinny repeal” of Obamacare, but don’t be fooled. He votes with Trump 83% of the time and he’s solidly in the “repeal and replace” camp.

The GOP Congress has worked to sabotage the health care law by killing the individual mandate to have insurance, cutting the sign-up period in half, slashing the ad budget and stopping billions in subsidies to insurers.

Despite that, 43,499 people in Arizona enrolled in coverage for 2018 on Healthcare.gov. McCain, who is dying of brain cancer, gets free healthcare as a US Senator and Navy veteran — but he would take away the guarantees and protections that the health care law provides for everyone else.

Recently I wrote McCain, calling on him to support the Affordable Care Act. His letter back was appalling:

Since the enactment of Obamacare more than seven years ago, American’s across the country continue to see the consequences of this disastrous law. In Arizona alone, the cost of midlevel health insurance plans on Obamacare’s marketplace increased by 116 percent on average last year. Worse still, before Obamacare, Arizona had 24 insurance companies selling plans on the individual market. Today, there are just two companies and 14 of Arizona’s 15 counties have just one insurer. That is not what President Obama promised when this bill was signed into law, and why the status quo is simply unacceptable.

As you may know, earlier this year I voted against the so-called ‘skinny repeal’ amendment because it would not have accomplished what I have been promising Arizonans for seven years, and that is to repeal and replace Obamacare. While the amendment would have repealed some of Obamacare’s most burdensome regulations, it offered no replacement to actually reform our health care system and deliver affordable, quality health care to our citizens.

As we move forward, it is critical that Congress not make the mistakes of the past that has led to Obamacare’s collapse, including in my home state of Arizona where premiums are skyrocketing and health care providers are fleeing the marketplace. We must now return to the correct way of legislating and send the bill back to committee, hold hearings, receive input from both sides of the aisle, heed the recommendations of our nation’s governors, and produce a bill that finally delivers affordable health care for the American people. Ultimately, the final product must be based around the fundamental value of freedom, and Obamacare is not.

Lie #1. “A disastrous law.” The 11.8 million who enrolled would disagree. Americans like that they are not being charged more or denied coverage because of a pre-existing health condition, and that they can get coverage for dependent children up to age 26.

Deception #2. “The cost of midlevel health insurance plans on Obamacare’s marketplace increased.” The truth is that Trump stopped paying cost-sharing reduction subsidies to insuance companies, which reduce the deductibles and out-of-pocket costs for people in marketplace plans. This caused premiums to jump.

Deception #3. “There are just two companies and 14 of Arizona’s 15 counties have just one insurer.” The truth is that Trump and the GOP Congress have driven insurers away by repealing the individual mandate to get insurance. This assured that younger, healthier people would enroll. But now, many enrollees are sick and need more costly care than expected, making it unprofitable for insurance companies.

Deception #4: “It is critical that Congress not make the mistakes of the past that have led to Obamacare’s collapse.” Past mistakes are not the problem. The trouble comes from sabotage — Trump and Republican Congressmen are actively working to make Obamacare collapse.

The Trump administration cut the sign-up period in half, to Nov. 1 through Dec. 15. Before that change, the signup period would have continued until Jan. 31.

Furthermore, the Health and Human Services department cut the Affordable Care Act’s advertising budget by 90 percent, to $10 million. Instead of promoting the health care law, the money was spent recording videos that attacked the health care law.

Despite all this, Obamacare is not collapsing — it is surprisingly stable. The current enrollment is 97% of the total from the previous year.

Deception #5: “Ultimately, the final product must be based around the fundamental value of freedom.” This is Republicanspeak gobbledegook. When McCain says “freedom,” he means freedom from consumer protections, freedom from clean water and air laws, and freedom from having health insurance.

The truth is that the GOP has no replacement for the Affordable Care Act. Trump and McCain just want to kill the law and go back to the dark days before it was enacted. They want to eliminate the health care law’s 10 essential benefits, requiring coverage of prescriptions, maternity care, and mental health.

And why should McCain care if his constituents have no health insurance? After all, he personally has coverage and so do his heartless GOP colleagues.