‘In Mitch We Trust’ for a DACA vote to end the ‘shit-show’ shutdown? That was your whole plan, Chuck? (Updated)

Home/Civil & Human Rights, Immigration/‘In Mitch We Trust’ for a DACA vote to end the ‘shit-show’ shutdown? That was your whole plan, Chuck? (Updated)
Previous Next

‘In Mitch We Trust’ for a DACA vote to end the ‘shit-show’ shutdown? That was your whole plan, Chuck? (Updated)

This reminds me of the library ghost scene in Ghostbusters where Dr. Raymond “Ray” Stantz confronts a full torso apparition of a librarian in the library.

Ray tells his colleagues, “OK, I have plan. I know exactly what to do. Now stay close. Do exactly as I say, get ready — get her!” (The ghost transforms into an evil demon and turns on them).

Later, Dr. Peter Venkman laughs, “Hee hee hee! ‘Get her!’ That was your whole plan, huh, ‘get her.’ Very scientific.” 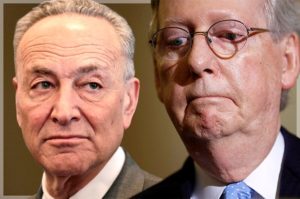 Dr. Venkman’s response — “‘Get her!’ That was your whole plan, huh, ‘get her.'” — is similar to my response to the deal struck today by Senate Minority Leader Chuck Schumer with the Septuagenarian Ninja Turtle, Senate Majority Leader Mitch McConnell, to end the “shit-show” shutdown: “In Mitch We Trust” to bring up a vote on DACA after February 8? That was your whole plan, Chuck, “In Mitch We Trust.” You’re kidding me, right?

Senate Democrats bowed to pressure to reopen the government Monday, joining Republicans in backing an immigration and spending compromise that was quickly denounced by liberals and immigration activists.

Roughly 60 hours after the federal government first shut down, a bipartisan group of negotiators in the Senate prevailed with leadership, trading Democratic support for reopening the government for a commitment by Republicans to hold a vote resolving the status of young undocumented immigrants by mid-February.

The Senate voted 81-18 to end a filibuster of a spending bill that would fund the government through Feb. 8 and reauthorize the Children’s Health Insurance Program for six years. The upper chamber was expected to pass the measure Monday afternoon, then send it to the House for quick approval.

The government can reopen once President Trump signs the funding into law.

Channeling rage from immigration activists, the possible 2020 candidates were highly critical of their leaders’ willingness to trust that Senate Majority Leader Mitch McConnell (R-Ky.) will allow an immigration vote after Feb. 8 if senators cannot strike a deal before then.

“I believe it’s been a false choice that’s been presented” between keeping the government open and resolving the DACA issue, said Sen. Kamala D. Harris (D-Calif.), who voted no. “I believe we can do both.”

A majority of Democrats had forced the shutdown with demands for a vote on legislation to protect Deferred Action for Childhood Arrivals recipients from deportation after Trump canceled the program. The final agreement did not include these protections, nor any specific guarantee of a vote.

Democratic and independent senators who relented in the standoff said they did not necessarily trust McConnell, but had faith that the bipartisan negotiators, including Sens. Susan Collins (R-Maine) and Joe Manchin III (D-W.Va.), would force him to abide by his commitments.

“I think frankly our trust is more with our colleagues, that they will hold him accountable,” said Sen. Claire McCaskill (D-Mo.), who is up for reelection this year in a state Trump won.

McConnell had said Sunday night and Monday morning that it was his “intention” to take up legislation addressing DACA, border security and other issues if Democrats agreed to fund the government until Feb. 8.

“This immigration debate will have a level playing field at the outset and an amendment process that is fair to all sides,” he said Monday.

Beltway pundits have divined that this means McConnell will not simply put forward the immigration bill from anti-immigrant hardliner Tom Cotton (R-AR), which is a non-starter with Democrats, but will allow the bipartisan “Gang of Six” DACA bill and other amendments to be offered and voted on in the Senate.

UPDATE: Per usual, the Beltway pundits are wrong. McConnell has previously said that he will only bring a DACA bill to the floor of the Senate that has the president’s support. This will not be the bipartisan “Gang of Six” DACA bill. “Sens. Lindsey Graham (R-S.C.) and Dick Durbin (D-Ill.) ‘were completely dishonest’ in their negotiations on immigration with President Donald Trump, White House deputy press secretary Hogan Gidley said Monday.” Graham-Durbin immigration proposal ‘completely dishonest,’ White House says. This is really about Trump retaliating against Sens. Durbin and Graham for publicizing his “shithole countries” comment to the press.

The vote to end debate on the spending bill came together quickly after Collins and several other senators said they wanted a firmer, more detailed commitment from McConnell.

“It would be helpful if the language were a little bit stronger because the level of tension is so high,” Collins told reporters outside her office.

A Republican aide involved in the talks said that McConnell and his team were considering putting their plan in document form with more detail as a way of convincing some Democrats to support the short-term bill.

Ahead of the vote to end debate, Senate Minority Leader Charles E. Schumer (D-N.Y.) warned McConnell to keep his word.

“I expect the majority leader to fulfill his commitment to the Senate, to me and to the bipartisan group, and abide by this agreement. If he does not . . . he will have breached the trust of not only the Democratic senators, but members of his own party as well,” Schumer said.

Then what? Are you going to take away his birthday? There are no guarantees that McConnell will keep his commitment or any means to enforce his agreement. “In Mitch We Trust” is not a plan. More importantly, this deal is limited to the Senate. Where is any guarantee from “the zombie-eyed granny starver from the state of Wisconsin,” House Speaker Paul Ryan, agreeing to bring the DACA bill up for a vote in the House? Or his agreement to “an amendment process that is fair to all sides,” as McConnell promised?

UPDATE: House Majority Whipe Steve Scalise tells POLITICO that the House doesn’t feel at all bound by Senate Majority Leader Mitch McConnell’s agreement with Senate Democrats to consider immigration legislation by Feb. 8. “March is really the timeline. … The House wasn’t part of that deal.” Playbook: Scalise says House not bound by McConnell’s pact with Dems. As POLITICO summizes: “Well, that deal was cute while it lasted. If the House doesn’t feel at all bound by the deal cut in the Senate, this whole three-day shutdown was for absolutely naught. Yes, there appears to be a bipartisan kumbaya in the Senate. But in the House, there’s a different tune being sung.”

Finally, where is any commitment from the racist white nationalist Twitter-troll-in-chief that he will sign whatever DACA bill the Congress sends to him, as he said he would do two weeks ago, before he reneged on it after being presented with a bipartisan “Gang of Six” DACA bill? Trump’s word cannot be trusted.

Aaron Blake of the Washington Post reports, Democrats caved on the shutdown, and they’re admitting it.

CNN reports, Democrats accepted the GOP’s plan, but here’s what they didn’t get:

Democrats accepted a commitment today to extend a funding bill to Feb. 8 without a resolution on immigration, but CNN’s Phil Mattingly noted they didn’t get guarantees on some of the key issues they were fighting for.

Mattingly said there is not a lot of trust right now with the President and where he’s going to come down on these things.

What Democrats did get

If there is no agreement by Feb. 8, McConnell promised there would be a vote with an amendment process on immigration.

Democrats got bupkus in this deal. Nice job, Chuck.