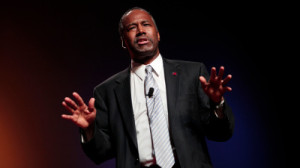 In a bizarre exchange to watch on “Meet the Press,” host Chuck Todd asked Ben Carson if a president’s faith matters. “Well, I guess it depends on what that faith is,” he replied. “If it’s inconsistent with the values and principles of America, then of course it should matter. But if it fits within the realm of America and consistent with the Constitution, no problem.”

Following up, Todd asked, “So do you believe that Islam is consistent with the Constitution?” Carson replied, “No, I don’t, I do not…. I would not advocate that we put a Muslim in charge of this nation.”

“Consistent with the Constitution” would be Article VI of the U.S. Constitution, which is unambiguously clear: “[N]o religious test shall ever be required as a qualification to any office or public trust under the United States.”

Carson’s Islamophobia drew swift rebukes from the White House, each of the leading Democratic candidates, and even many Republicans. Ben Carson draws fire for comments on Muslims. But Carson’s campaign appears to be relishing the attention.

The retired right-wing neurosurgeon, however, doesn’t seem to care. Carson stood by the comment on Sunday night, and reiterated his message last night on his official Facebook page, declaring he “meant exactly what I said.” The GOP contender added, “Those Republicans that take issue with my position are amazing.”

Carson’s campaign reported strong fundraising and more than 100,000 new Facebook friends in the 24 hours after he told NBC’s “Meet the Press” on Sunday: “I would not advocate that we put a Muslim in charge of this nation.”

His campaign manager Barry Bennett told The Associated Press on Monday: “While the left wing is huffing and puffing over it, Republican primary voters are with us at least 80-20.”

“People in Iowa particularly, are like, ‘Yeah! We’re not going to vote for a Muslim either,’” Bennett said. “I don’t mind the hubbub. It’s not hurting us, that’s for sure.”

And that’s arguably every bit as striking as Carson’s original sentiment.

To hear the candidate’s campaign manager tell it, there’s nothing wrong with brazen bigotry towards an American religious minority, just so long as the Republican Party’s right-wing base shares that bigotry.

It’s an unsettling standard for propriety and decency. As the argument goes, intolerance is acceptable among candidates for national office – even if the prejudice targets a group of Americans – if intolerant voters agree.

Greg Sargent extrapolates on this point in the Morning Plum: What if a lot of Republicans agree with Ben Carson’s Islamophobia?

Ben Carson has already stoked outrage with his suggestion that he wouldn’t want to see a Muslim president and that Islam is not consistent with the Constitution. But it appears he may only just be getting started.

Glenn Kessler has a nice catch: In a follow up interview, Carson made the claim that “Taqiyya is a component of Sharia that allows, and even encourages you to lie to achieve your goals.” As Kessler explains, this is a distortion of the Koran that is trafficked in by anti-Muslim diehards, with the “apparent aim of painting all Muslims as untrustworthy.” [Carson earns Four Pinocchios for a false claim about Islam.] Meanwhile, [Ben Carson’s campaign manager on Monday made clear Islam was the only faith he believes runs afoul of the values in the U.S. Constitution, sparing potential candidates for the White House who might happen to be Jewish, Hindu or Buddhist],  telling the Huffington Post: “I don’t think there’s any other religion that says that people of other religions have to be killed.” Ben Carson Campaign Manager: We Have No Issue With ‘Islam-Lite’.

So what happens when pollsters ask Republican voters whether they agree with Carson’s sentiments?

Two recent polls suggest many of them might be favorably disposed towards Carson’s views. A Pew Research survey from last year found that Republicans and GOP-leaning independents view Muslims significantly more negatively than they see other religious groups.

The Times report also notes that these tendencies are worrying to Republicans, particularly those “who are determined to reorient the party to win in a changing country.” The story adds: “the debate over Islam is particularly worrisome for Republicans because it so vividly highlights the vacuum that has been created by the absence of a unifying leader who can temper the impulses of the rank-and-file.”

To be clear, I hope Republican voters overwhelmingly reject Carson’s views. As I’ve repeatedly written, it’s important to remember that a lot of GOP voters don’t share the crudest Trump-like sentiments and view immigration in a significantly more nuanced way than he does. Hopefully we’ll see the same in Carson’s case. But if pollsters do test Carson’s views — as they did with Trump’s — you could see sizable percentages of GOP voters agreeing with them. And that could produce a whole new round of hand-wringing from GOP leaders and more calls for the “responsible” GOP candidates to denounce Carson.

Republican presidential candidate Ben Carson says “P.C. culture” is to blame for the fallout over his statement against electing a Muslim president.

Carson tells reporters in Ohio on Tuesday that his view is that anyone wanting to be president must embrace the Constitution and American principles. He says anyone who does can be president. Carson adds that would also oppose a Christian for president who wanted to establish a theocracy.

Carson just lost the Christian Right there — theocracy is what Christian Reconstructionists and Dominionists are all about.

UPDATE: Amanda Marcotte has a must-read commentary at Talking Points Memo.How Ted Cruz Gave Away The GOP’s Muslim Strategy (the right-wing conspiracy theory that Obama is a secret Muslim who will impose Sharia law in the U.S.)