It’s All Over In Arizona But For Republican Lawlessness

Home/AZ Elections, AZ Government/It’s All Over In Arizona But For Republican Lawlessness
Previous Next

It’s All Over In Arizona But For Republican Lawlessness

As predicted, the Last challenge to Maricopa County election results tossed by judge:

A Maricopa County Superior Court judge tossed out a lawsuit on Friday claiming that the county denied one voter the right to cast her ballot and failed to properly process another voter’s ballot, dismissing the last election-related case pending in Arizona.

Judge Margaret Mahoney did not elaborate on her reasoning for throwing out the case at the end of the hearing but said she would issue an order in writing.

Whatever Mahoney decided, the case — involving only two ballots — would not have changed the outcome of the election.

But the judge’s decision, after a daylong trial, makes the case just the latest in a string of challenges to the election process to fall flat in Arizona’s courts as President Donald Trump sought to call into question his defeat at the ballot box earlier this month.

The lawsuit named two voters as plaintiffs: Laurie Aguilera, the same woman who filed the now-defunct suit against the county over the use of Sharpies on Election Day, and Donovan Drobina.

So “Sharpiegate III,” the sequel is over.

There are no longer any post-election cases pending in Arizona. https://t.co/6nnEQ7L8xp

But Republican attempts to delegitimize the election in service to Donald Trump’s “GOP Clown Car Coup” attempt continue. There is no honor among thieves.

The ballot machines that determined President-elect Joe Biden defeated President Donald Trump by 45,109 votes in Maricopa County accurately counted those ballots, the chairwoman of the Maricopa County Republican Party confirmed in two documents signed Wednesday. Nevertheless, she wrote “certification denied” next to her signature — a notation that elections officials say means nothing.

Linda Brickman told Arizona Mirror that the accuracy test conducted Wednesday showed the vote-counting machines were working properly, and that her dissent is aimed at overturning the election result.

“It is most important that we sign the way it was necessary to sign to help our president get back into office,” Brickman said. “And if he didn’t win officially, I guess we have to live with those results. I’m not going to sit there and protest, but I will stand behind him 110%.” 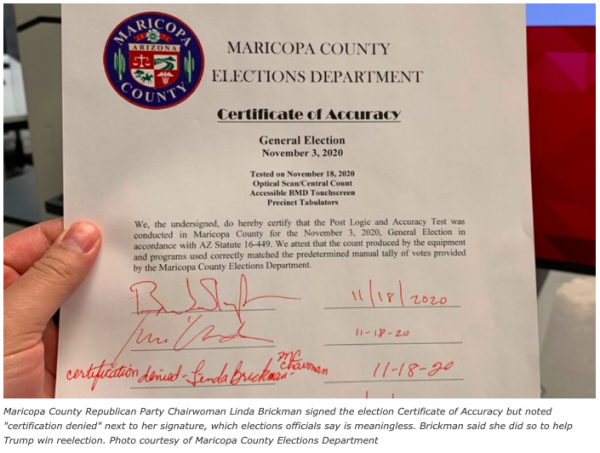 Brickman said she believes the count of actual ballots was wrong, and blamed the software that the ballot-counting machines use.

“The problem is not what we saw there. The problem lies within the machine in the software that we cannot see,” Brickman said. “I want to see what is going on inside the machines.”

That software, which was approved by the federal Election Assistance Commission, is what allowed the machines to correctly count ballots in pre- and post-election accuracy tests. And a hand-count audit conducted this month found the machines perfectly counted ballots cast on Election Day.

Brickman’s signature with the “certification denied” note is the latest example of Republican officials in Arizona and across the country attempting to block the certification of election results.

In Pima County, the two Republican county supervisors voted not to certify their county’s vote, citing unfounded “election irregularities.” And supervisors in Mohave County — which Trump won overwhelmingly — delayed certifying their election until the Nov. 23 deadline, which GOP supervisor Hildy Angius toldThe Washington Post “has nothing to do with our results” but is “more of a big picture sort of thing.” And Jean Bishop, chair of the Mohave supervisors, said the move is “political,” and intended to “make a statement to support the state party.”

Brickman, like many other Arizona Republican leaders and election officials, is calling for a hand recount of all ballots cast in Maricopa County. She declined to specify how the recount should be conducted in order to appease her concerns, but she said she had questions about the software.

The gesture of signing two “Certificate of Accuracy” documents with a notation denying the text in those documents has no significance, according to election officials. State law mandates the accuracy testing to “ensure the maximum degree of correctness, impartiality and uniformity in the administration of an electronic ballot tabulating system.”

“It doesn’t mean anything,” Sophia Solis, a spokeswoman for the Arizona Secretary of State’s Office, said of Brickman’s note next to her signature.

Erika Flores, a spokeswoman for the Maricopa County Elections Department, said even if Brickman had declined to sign the certificate of accuracy, another Republican representative vouched for the accuracy of the voting systems.

“Even without Mrs. Brickman’s signature, there was a Republican, Democrat and Libertarian that all signed off certifying the results of the test and accuracy of the equipment,” Flores said.

Arizona Republican Party Chairwoman Kelli Ward signed the documents on Wednesday, as did the leaders of the county Democratic and Libertarian parties, and a representative from the Arizona Attorney General’s Office.

“She signed on as an observer, which means nothing, I was the one that was official,” Brickman said.

While the logic and accuracy test was still in progress on Wednesday, Brickman issued a press release declaring that any certification is premature. She called for an investigation by county and state prosecutors over widely debunked concerns about the Dominion Voting System machines the county has been using for a decade.

Brickman’s attempt to delay the official canvass of election results is a stance shared by Ward and other Republicans in the state and country.

According to the Associated Press, the state GOP is pressuring county officials statewide to delay certifying election results, despite no evidence of election fraud.

A. A person who at any election knowingly interferes in any manner with an officer of such election in the discharge of the officer’s duty, or who induces an officer of an election or officer whose duty it is to ascertain, announce or declare the result of such election, to violate or refuse to comply with the officer’s duty or any law regulating the election, is guilty of a class 5 felony.

Linda Brickman’s signature with the “certification denied” note on the Maricopa County certification of accuracy is prima facie evidence of a felony, and she has made an admission against interest confirming that “her dissent is aimed at overturning the election result” to the Arizona Mirror.

The Arizona Attorney General’s Office has an election integrity unit and it has solicited complaints of irregularities.

So where is the Attorney General investigation of the Arizona Republican Party, and the Republican election officers, like Linda Brickman, who are complying with this illegal scheme to delay certification of the election?

We cannot accept nor normalize the lawlessness of Republican attempts to delegitimize an election and to delay certification of the election.

This illegal scheme to overturn the election results for president is doomed to failure because In Arizona, it is seemingly impossible for the Legislature to alter the election outcome:

Calls by some Republican legislators for a special session in Arizona and reports that the president could try to get state lawmakers across the U.S. to somehow hand him a victory through the Electoral college have stirred suspicion that legislators may seek to discard, or at least delay, the election results.

In Arizona, that would seem to be impossible.

For one thing, the Legislature cannot convene on its own without support from two-thirds of the members in each chamber. That means Democrats would have to agree.

Gov. Doug Ducey could call a special session, but any legislation passed would not take effect for months. And the Legislature can’t change the state’s electors without a change in law. [And it’s already too late to change the law.]

Still, President Donald Trump’s campaign continues to fight the outcome of the race in several states after his defeat at the ballot box earlier this month. Some lawmakers have heeded his call.

Rep. Mark Finchem, R-Oro Valley, said on social media Thursday that the Legislature “must be called back into special session to hold a hearing, take evidence and make a decision on whether fraud corrupted our 2020 elections.”

It’s not a universal sentiment among Republicans, though.

“There’s no way we can say we’re going to change this now,” Senate President Karen Fann, R-Prescott, said on Thursday.

Fann has said she does not expect a special session and House Speaker Rusty Bowers, R-Mesa, has not signaled any interest in one.

If the governor were to take that step, the calendar becomes a problem. Any legislation passed would not take effect for months unless approved by supermajorities in each chamber, Fann noted. Again, that would require support from Democrats.

Changing the state’s electors seemingly is impossible, too. The U.S. Constitution gives the Legislature the job of deciding how the state’s presidential electors will be chosen.

The Arizona Legislature has tasked voters with choosing those electors on Election Day.

A “faithless elector” provision in state law requires the electors to cast their votes for the presidential candidate who wins the most votes in the state.

Senate Republicans asked lawyers at the Legislature this month to issue an opinion on the issue. The response: The Legislature would have to change these laws to change how presidential electors are appointed.

And even if they did, the opinion said, the changes could not apply to this election because voters have already chosen the electors at the ballot box.

The “faithless elector” provision, by the way, was one sponsored by Republicans in 2017.

“The reason these laws are in place is for the protection of the voters,” Fann said.

All of this Republican lawlessness is for naught, but it is still a crime which ought to be investigated, and prosecuted where warranted.