It’s June, and you know what that means: SCOTUS watch. According to Scotusblog’s “statistical snapshot”, there are still 31 cases to be decided before the end of the month. 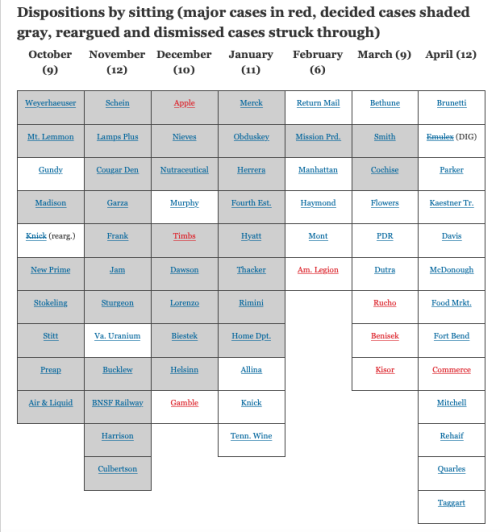 Six of these remaining cases have been designated “major cases” by SCOTUSblog – case summaries are by SCOTUSblog:

Gamble v. United States, Issue: Whether the Supreme Court should overrule the “separate sovereigns” exception to the double jeopardy clause.

The American Legion v. American Humanist Association, Issues: (1) Whether a 93-year-old memorial to the fallen of World War I is unconstitutional merely because it is shaped like a cross; (2) whether the constitutionality of a passive display incorporating religious symbolism should be assessed under the tests articulated in Lemon v. Kurtzman, Van Orden v. Perry, Town of Greece v. Galloway or some other test; and (3) whether, if the test from Lemon v. Kurtzman applies, the expenditure of funds for the routine upkeep and maintenance of a cross-shaped war memorial, without more, amounts to an excessive entanglement with religion in violation of the First Amendment.

Lamone v. Benisek, Issues: In case in which the plaintiffs allege that a Maryland congressional district was gerrymandered to retaliate against them for their political views: (1) whether the various legal claims articulated by the three-judge district court are unmanageable; (2) whether the three-judge district court erred when, in granting plaintiffs’ motion for summary judgment, it resolved disputes of material fact as to multiple elements of plaintiffs’ claims, failed to view the evidence in the light most favorable to the non-moving party, and treated as “undisputed” evidence that is the subject of still-unresolved hearsay and other evidentiary objections; and (3) whether the three-judge district court abused its discretion in entering an injunction despite the plaintiffs’ years-long delay in seeking injunctive relief, rendering the remedy applicable to at most one election before the next decennial census necessitates another redistricting.

Kisor v. Wilkie, Issue: Whether the Supreme Court should overrule Auer v. Robbins and Bowles v. Seminole Rock & Sand Co., which direct courts to defer to an agency’s reasonable interpretation of its own ambiguous regulation.

Department of Commerce v. New York, Issues: (1) Whether the district court erred in enjoining the secretary of the Department of Commerce from reinstating a question about citizenship to the 2020 decennial census on the ground that the secretary’s decision violated the Administrative Procedure Act, 5 U.S.C. 701 et seq; (2) whether, in an action seeking to set aside agency action under the APA, a district court may order discovery outside the administrative record to probe the mental processes of the agency decisionmaker — including by compelling the testimony of high-ranking executive branch officials — without a strong showing that the decisionmaker disbelieved the objective reasons in the administrative record, irreversibly prejudged the issue, or acted on a legally forbidden basis; and (3) whether the secretary’s decision to add a citizenship question to the decennial census violated the enumeration clause of the U.S. Constitution.

This past week in Department of Commerce v. New York, the Challengers in census case notify justices about new evidence. Amy Howe explains:

The notification came in a letter to the Supreme Court from Dale Ho, a lawyer from the American Civil Liberties Union who argued on behalf of the challengers last month. The challengers, Ho wrote, have filed a motion in the district court suggesting that the government should be sanctioned because the new evidence contradicts both testimony by senior government officials and representations by government lawyers in the case.

In particular, the motion filed in the district court (and included as an exhibit to Ho’s letter) explained, the strategist, Thomas Hofeller, “concluded in a 2015 study that adding a citizenship question to the 2020 census ‘would clearly be a disadvantage to the Democrats’ and ‘advantageous to Republicans and non-Hispanic Whites’ in redistricting.” Hofeller, the motion continued, was the real author of a draft letter from the Department of Justice to the Department of Commerce asking to include the citizenship question and indicating that the citizenship data would help the DOJ to better enforce federal voting rights laws. Moreover, the motion added, “the letter that DOJ eventually sent to Commerce in December 2017 adopted the same” voting-rights “rationale and bears striking similarities to Dr. Hofeller’s 2015 study stating that a citizenship question on the Census was essential to advantaging Republicans and white voters.”

“Based on this new evidence,” the motion concluded, “it appears that both” Mark Neuman, a Ross advisor, and John Gore, a senior DOJ official, “falsely testified about the genesis of DOJ’s request to Commerce in ways that obscured the pretextual character of the request.”

The district court, Ho’s letter to the justices noted, has already scheduled a hearing in the case for Wednesday, June 5. The government has asked the Supreme Court to rule on the census dispute by the end of June, so that it can finalize the census questionnaire and get the forms printed in time for distribution next year.

This case should now be put on hold. The proper course is to remand this case back to the trial court for further adjudication based upon the discovery of new evidence and a fraud upon the court. There is no guarantee the court will do this, however. It would mean that the Trump administration would not have time to include a citizenship question on the 2020 Census.

A secret trove of documents was revealed Thursday showing that the Trump administration added a citizenship question to the 2020 census as part of a right-wing plan to change how voting districts are drawn in the United States—a plan hatched to benefit “non-Hispanic whites.”

This is worse than anyone thought. This is white supremacy.

The citizenship question is already the subject of the most important Supreme Court case of the year. In that case, the ACLU and other progressive organizations alleged that the Trump administration added a question about citizenship to intimidate Hispanics from filling out the census for fear the information would be used by law enforcement for deportation. The Census Bureau estimates 6.5 million people won’t respond.

That undercounting, in turn, would lead to fewer Democratic-leaning congressional districts, to under-apportioning money for areas with uncounted residents, and even to decreasing the electoral college representation of Hispanic-heavy states like Texas, California, and New York. It would make presidential elections like 2016—where Trump won the most electoral votes despite losing the popular vote—more likely.

In fact, the purpose of the citizenship question is to redraw congressional districts based on their number of citizens, rather than their total population, thus transforming democracy in America to the detriment of immigrants and people of color.

Congressional districts currently have populations of about 710,000 people. But if only citizens, rather than total population, were counted, then, for example, an area with 1.2 million people, including 500,000 non-citizens, would have the same representation as an area with 710,000 people. As the newly revealed documents explicitly discuss, the end result would be more white, Republican districts and fewer non-white, Democratic ones.

“We now know that the citizenship question germinated in an effort to limit the power of minority communities,” Dale Ho, the lawyer who argued the case at the Supreme Court, told The Daily Beast. “It’s all laid out there in black and white. It’s pretty remarkable.”

The man at the center of the revelation is one of those shadowy political operatives who has shaped American politics without most people knowing his name: Thomas Hofeller, who died last summer at age 75.

Hofeller was one of the key players in the wildly successful 2010 REDMAP initiative. In response to President Obama’s victory and the demographic changes in America, REDMAP used big data and dark money to flip otherwise obscure state-level races. That, in turn, flipped several state legislatures, which promptly redrew dozens of electoral maps to favor whites over non-whites, Republicans over Democrats.

Those maps, too, were the creation of Hofeller and his team.

Coincidentally, two major gerrymandering cases, both descended from Hofeller’s REDMAP efforts, are also being considered by the Supreme Court at the moment—and like the census case, it is likely that the Court’s conservative majority will rule for the gerrymanderers.

Hofeller’s estranged daughter, a liberal, came across four hard drives and eighteen thumb drives after her father’s death. They contained 75,000 files, including countless files on REDMAP and Hofeller’s subsequent efforts to entrench white legislative majorities even in an age of non-white population majorities.

One of those files was a 2015 study he wrote for the conservative news outlet the Washington Free Beacon [The website is financially backed by Paul Singer, an American billionaire hedge fund manager and conservative activist], showing how redistricting based on citizens rather than total population would benefit “non-Hispanic whites” and Republicans—but that such data could only be obtained by adding a citizenship question to the census.

Another was a ghostwritten letter, drafted by Hofeller, requesting the citizenship question. This exact language was placed into the Department of Justice request of the Commerce Department that administers the census. That request is at the center of the Supreme Court case.

None of this was disclosed by Trump administration officials. On the contrary, they baldly lied about it, denying that Hofeller had anything to do with the citizenship question when in fact he had written the DOJ letter requesting it. Indeed, senior DOJ official John Gore testified under oath that he drafted the letter, which we now know was copied from Hofeller.

How all this will affect the Supreme Court case is uncertain.

[T]he new evidence does show that the government clearly lied, in violation of the Administrative Procedure Act. The Court can and does consider new evidence when it enables the disposition of a case. And here, the memo, the letter, and the lies all amount to a gigantic violation of the law.

“If the government can get away with doing things for the opposite reason of what they say they’re doing,” said Ho, “we are in Orwellian territory.”

It’s possible that the Supreme Court will send the case back to lower courts for deliberation of the new evidence. The ACLU has submitted the evidence to the district court where the case was first heard, arguing for sanctions against the officials who lied under oath.

A remand to the district court could doom the citizenship question, since census forms must be printed in the coming months, although Ho told The Daily Beast that the government has lately admitted that, with more money, they can print census forms faster if need be.

Apart from the legal issues, however, [Thursday’s] revelation is a bombshell, even by the standards of the Trump administration. It reveals a years-long effort, led by the White House, to rig the electoral system for partisan and racist goals. At stake is more than just the census, and more than congressional representation. At stake is the principle of “one person, one vote.” [Baker v. Carr, 369 U.S. 186 (1962)]. At stake is democracy as we know it.