The Washington Post asked yesterday, In the clutch, will Jeb Bush perform? Or choke?

The stakes in tonight’s debate are as high for Jeb Bush as anyone else. A week after his campaign’s major downsizing, I’m hearing from some already-nervous Bush donors that they will close their checkbooks if the ex-Florida governor doesn’t have a breakout moment.

After last night’s debate the consensus opinion is in: J.E.B.! pulled a Bill the Cat and choked. Ack! Jeb Bush needed a debate touchdown. He didn’t come close: 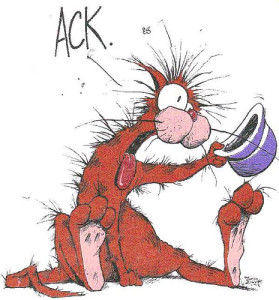 Jeb Bush needed a touchdown. Instead, he was plagued by a series of false starts.

The former Florida governor entered Wednesday night’s Republican presidential debate with little margin for error in a race that has spiraled out of his control. He needed to make things right. But time and again, he failed to capitalize on the opportunities he created for himself.

“I do like Jeb Bush,” tweeted conservative blogger Erick Erickson. “He is a good person. But he needs to start thinking about his future now.”

For weeks, Bush has been jabbing at Rubio by calling for members of Congress who don’t do their job to have their pay docked. This was his moment to go for a knockout blow.

“Could I bring something up here, because I’m a constituent of the senator and I helped him and I expected that he would do constituent service, which means that he shows up to work,” Bush interjected after Rubio shrewdly blamed a media bias he said Democratic senators who ran for president didn’t have to overcome. Bush added, “Marco, when you signed up for this, this was a six-year term, and you should be showing up to work.”

Rubio came prepared with a counterattack that deflated Bush’s offensive, citing the former Florida governor comparing himself to John McCain circa 2008.

“You know how many votes John McCain missed when he was carrying out that furious comeback that you’re now modeling after?” asked Rubio.

[Irrelevant. J.E.B.! is not currently in office, so he is not failing to perform the job for which he was hired like Rubio.]

How Marco Rubio owned Jeb Bush in Wednesday’s GOP debate — on the same day that Rubio’s home town newspaper said Marco Rubio should resign, not rip us off. J.E.B.! was heard to mutter under his breath, “I can’t believe I’m losing to this guy.”

Later, Bush awkwardly stumbled through a remark meant to highlight Democratic efforts to raise taxes. “You find a Democrat that’s for cutting taxes — cutting spending $10, I’ll give them a warm kiss,” he said.

Bush logged the least amount of speaking time, according to media tallies. His campaign manager at one point expressed worries to debate host CNBC about the format and management.

Bush set himself up for a high-stakes performance. At a donor summit on Sunday and Monday in Houston, his campaign briefed top financiers on its strategy, including an extensive criticism of Rubio. The campaign shared its pitch with the media, signaling that it was embracing a side-by-side comparison with Rubio in the debate.

Bush got that comparison. And Rubio came off looking better to most conservatives.

After the debate, Bush told CNN that he remained hopeful.

“It’s a long haul,” he cautioned. “We have the best ground game,” he argued. “We’ve got a long way to go,” he said, echoing his own comments.

[E]ven his most ardent supporters concede he didn’t do himself any favors Wednesday night.

“The debate performances are having a huge influence this time around,” Republican strategist and Bush booster Ana Navarro said on CNN. “It’s probably the one component where he’s not doing as well.”

That sound you hear is donors checkbooks slamming shut. The end is inevitable. Buh-bye J.E.B.!