In an earlier post, I suggested How John McCain can troll the Trump campaign in 2020:

Since snowflake Trump is so easy to set off in a rage with just the mention of John McCain’s name, I am going to propose a national campaign to troll our Twitter-troll-in chief as he launches his reelection campaign in Orlando, Florida on June 18.

You know those cardboard giant heads you see at NCAA college basketball games, and other sporting events? Yeah, let’s do that.

Everywhere Trump goes he should be confronted by people carrying cardboard giant heads of John MCCain just to offend his delicate snowflake sensibilities and send him into a rage. He is bound to say something offensive and stupid, demonstrating that he is a small and petty man who is unworthy of the presidency.

Along the same lines, VoteVets.org plans to hand out thousands of T-shirts during the “Salute to Trump” Fourth of July event today in Washington, D.C. that feature one of Trump’s political rivals — the late Sen. John McCain. Veterans to hand out John McCain shirts at July Fourth celebration in DC:

VoteVets, a liberal advocacy group founded by Iraq and Afghanistan war veterans, are behind the effort to distribute shirts Thursday featuring the USS John McCain, a Navy destroyer, along with the words, “Big Bad John.” Jon Soltz, chairman of VoteVets, said the action is meant to be a show of inclusivity. 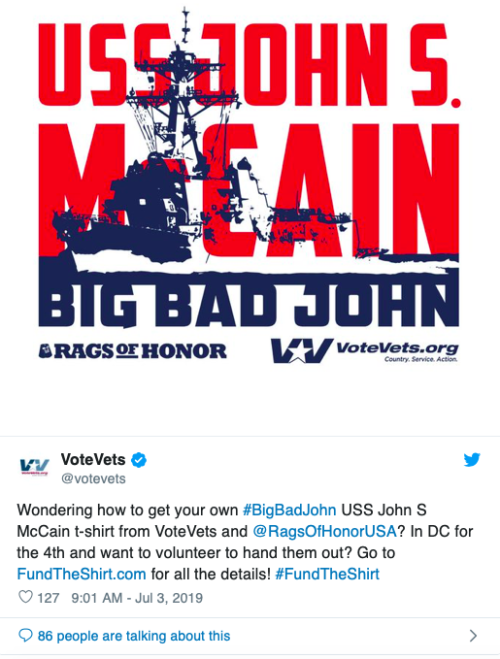 “While VoteVets and John McCain never much saw eye-to-eye on policy, and probably still would not if he was around today, his family’s service to America spoke to that sense of realizing this nation is bigger than just one man,” Soltz said in a statement. “Honoring that kind of legacy — especially of a political opponents — seemed fitting for July Fourth.”

Last month, White House staff asked the Navy to hide the USS John McCain during Trump’s state visit to Japan, according to media reports. The destroyer is named for McCain, his father and grandfather, all of whom served in the Navy.

A statement from VoteVets didn’t mention the rivalry between the two men but said the shirts were meant to celebrate “coming together as a country.” VoteVets is a vocal critic of Trump and has filed multiple lawsuits against his administration.

The “Big Bad John” shirts were made by Rags of Honor, an apparel company that hires homeless veterans. All of the money from T-shirt sales will go to Rags of Honor, according to a statement.

“Whether it was Sen. McCain, his father, his grandfather or his sons, the McCain family has given more to this country than most, and America’s birthday seems like a great time to honor that service and sacrifice,” Mark Doyle, founder of Rags of Honor, said in a statement. “After all, people like them — and there aren’t many — made these kinds of celebrations possible.”

The shirts will be distributed in downtown Washington on the evening of July Fourth, ahead of “A Salute to Trump” — an elaborate event planned by Trump that includes music, military demonstrations and multiple flyovers of military aircraft followed by a fireworks display. Trump plans to address the nation from the Lincoln Memorial.

I’m telling you, cardboard giant heads in the crowd is all it will take. Just do it!

Also, Code Pink received permission Monday for their round, diapered Donald Trump baby balloon to be present during a July 4 celebration near the location where Trump will deliver remarks during his “Salute to Trump.” ‘Baby Trump’ balloon gets permit to be present for July 4 in DC:

Code Pink, got approval from the National Park Service to have the balloon present between 4 a.m. and 9 p.m. ET on July 4 on a section of the National Mall near the Washington Monument.

The permit states that “all balloons are prohibited” on the National Mall, but that the service would allow the Trump balloon to be present if it adhered to certain conditions, including being “filled with cold-air only and unable to achieve flight.”

Trump is set to deliver remarks nearby at the Lincoln Memorial during the “Salute to Trump” event, which will take place from 6:30 p.m. to 7:30 p.m. ET.

In a statement released on Tuesday, the group expressed frustration with the permit, saying that it “is not in the location we requested — within line of sight of the Lincoln Memorial where President Trump will be speaking.”

According to the statement, the group had requested to fly the balloon “on the large, empty expanse at the base of the Washington Monument that would not have obstructed anyone’s view but would have allowed the president to see the baby.”

“It is ironic that it is right here, in the ‘land of the free,’ the balloon is being grounded,” Code Pink co-founder Medea Benjamin said in the statement.

A coalition of more than 20 groups—including Black Lives Matter D.C., immigrants rights group Sanctuary DMV and anti-gentrification organization Keep D.C. 4 Me—will host an all-day counterdemonstration at Pershing Park. Members of the District’s communities of color will lead a dance party to go-go music for “black, brown, and indigenous joy in the face of white nationalism and supremacy.”

It is not just John McCain who will rain on Trump’s parade. The D.C. area faces a Weather Alert Day as humid, stormy weather is expected. Storms With Lightning, Downpours Could Impact Fourth of July Plans:

Widespread storms and rain could likely impact your Fourth of July plans.

“After 2 p.m., it is fair game for anyone in the D.C. area to see storms,” Storm Team4 Meteorologist Somara Theodore says.

Showers and storms are expected to begin after lunchtime and are a threat through sunset. Any storms that pop could be on the strong to severe side with heavy downpours and lots of lightning. Lightning will be a major concern for anyone planning to be outdoors on Thursday afternoon.

While it won’t be a washout, unfortunately, storms are most likely to hit 5-9 p.m. — during the critical fireworks time frame.

It appears that there is little interest in the “Salute to Trump” event beyond his MAGA cult followers. White House staff forced to hand out VIP tickets to Trump’s Fourth of July rally to anyone who will take them:

Politico reporter Nancy Cook detailed the shocking desperation for White House staff as they struggle to get Washingtonians to attend President Donald Trump’s Fourth of July rally. According to Cook, there’s already an outbreak of “finger-pointing” about the low turnout and the festivities haven’t even begun.

Cook filed the story earlier in the evening, but on “The 11th Hour,” she told substitute host Ali Velshi that she’s hearing White House staffers are so desperate to find people who will appear in Trump’s VIP section that they’re giving them to anyone who will come.

“Well, really what the concerns are are that there’s a question about will enough people show up,” Cook told Velshi on Wednesday. “The White House and the Republican National Committee has all of these VIP seats they’ve been trying to off-load. Originally they tried to give them to a bunch of high-end donors.”

“Now I’ve been hearing even tonight, after I published this story today, that they’re really willing to off-load them to — one White House staffer that I talked to late this afternoon took home 15 tickets and was just going to hand them out to whomever she could tomorrow,” Cook revealed. “And the big concern on the part of the White House and the RNC is whether or not these seats will be filled.”

She reiterated that this event could be another colossal embarrassment, just like Trump’s 2017 inauguration.

Maybe he can get Sean Spicer to come back to assert that “It was the biggest, best parade evah!”

UPDATE: Yes indeed, it rained on Trump’s parade. It was a hot wet mess, as was his pedantic speech that sounded like an eighth grade book report delivered by a student who did not bother to do the assigned reading.

Did you know that that the Continental Army had an air force, and that we seized airports from the British RAF? Neither did I. 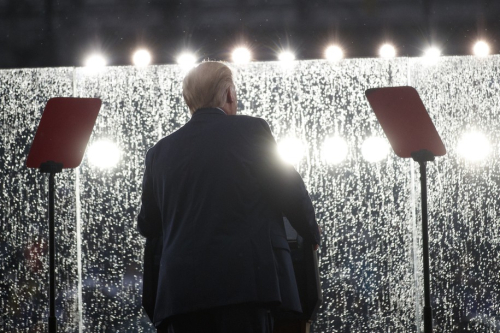 Critics of President Donald Trump were flying high Thursday after his jaw-dropping gaffe in his Independence Day speech, in which he said that the brave U.S. Army took over airports during the Revolutionary War.

Trump, clearly reading from a teleprompter, talked about how the Continental Congress in 1775 “created a unified Army out of the Revolutionary Forces encamped around Boston and New York.” The army suffered a “bitter winter of Valley Forge, found glory across the waters of the Delaware and seized victory from Cornwallis of Yorktown,” Trump said. Cornwall, of London, was defeated at Cornwall.

Here’s where it goes off the rails: “Our Army manned the air, it rammed the ramparts, it took over airports, it did everything it had to do,” Trump added. “And at Fort McHenry, under the rockets’ red glare, had nothing but victory. When dawn came, the star-spangled banner waved defiant.”

The White House did not provide Trump’s complete prepared speech, so it wasn’t clear where exactly or how the goof-up occurred. The president suddenly zoomed ahead from the Revolutionary War to the War of 1812, which involved Fort McHenry (he called it “McHendry”)— and the “rockets’ red glare” and the “star-spangled banner” of Francis Scott Key’s national anthem. He seemed to be squinting while reading the teleprompter and struggling with some of the words.

The nation’s maiden plane voyage by the Wright Brothers didn’t occur until 1903. Trump referred to that flight elsewhere in his speech. 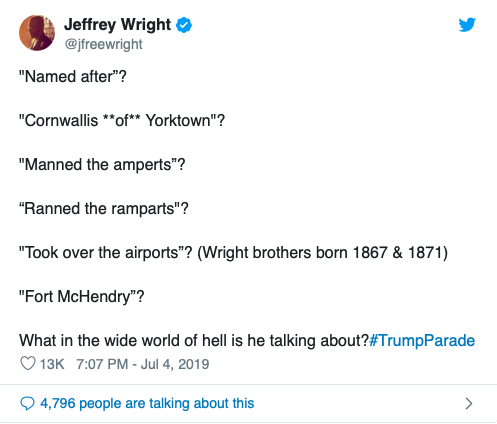 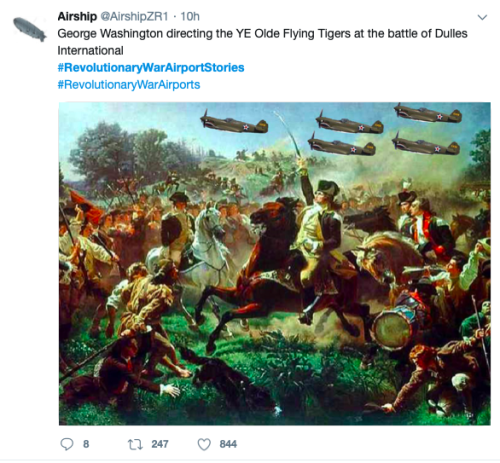 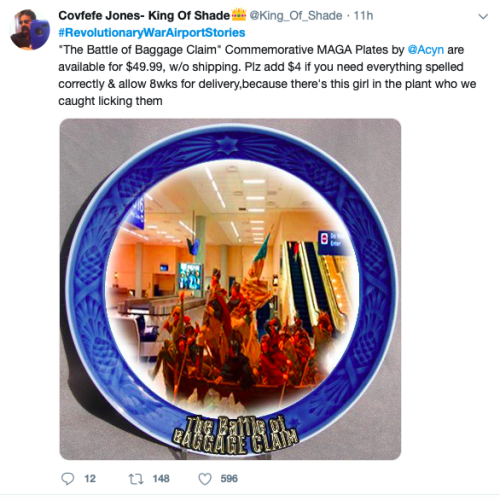 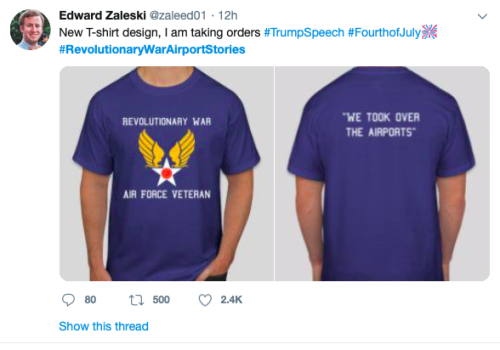