Another “Trump true crime story” lost in the maze of craze, from earlier this week. It appears the Trump crime family of grifters and con men are still engaging in pyramid schemes, even after getting nailed for Trump University and the Trump Foundation. Grifters gotta grift I guess.

A federal judge ruled Monday that a lawsuit alleging President Donald Trump engaged in fraud by promoting a pyramid scheme will not be delayed.

Schofield’s decision came after Trump’s lawyers launched interlocutory appeals in the case—a type of legal appeal filed while a case is ongoing rather than it after it has finished. The judge cited Trump’s unsuccessful bid to force the case into arbitration “despite the absence of any written agreement” as a reason why an appeal was unlikely to be successful. Other factors in the decision included how much harm a stay would inflict on either party, along with what decision would be in the best interest of the public.

“Weighing the two ‘most critical’ factors — likelihood of success on the merits and irreparable harm — against each other, any prejudice that Defendants and ACN may suffer from proceeding with the litigation during the pendency of the appeal does not outweigh the strong likelihood that Defendants and ACN will not succeed on appeal,” the judge wrote.

In March, Schofield ordered Trump to provide the plaintiffs with 15 years of detailed records that could include information relevant to the case. She ruled against the attempt to force arbitration the following month.

Trump’s relationship with ACN is said to have begun in the mid-2000s, continuing until just before he began campaigning for president. The lawsuit was originally filed in October 2018, alleging that the Trumps never disclosed their relationship with ACN as they made millions by falsely claiming that vulnerable investors would have a “reasonable probability of success” if they spent hundreds of dollars or more to join the scheme.

“The Trumps conned each of these victims into giving up hundreds or thousands of dollars—losses that many experienced as a devastating and life-altering,” the lawsuit claims. “Surely the Trumps dismissed these amounts (and the lives they wrecked) as trivial. But by defrauding so many for so long, the Trumps made millions.”

Trump insisted that he was “not familiar” with the company’s business practices after launching his 2016 presidential campaign, despite having earlier spoken on behalf of the company at events and in promotional videos, as well as featuring them on The Celebrity Apprentice. 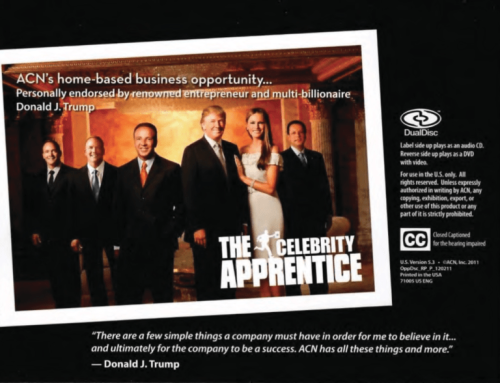 Dan Abram’s Law & Crime reporters Matt Naham and Aaron Keller explain this complex case in greater detail, Judge Deals Setback to Trump Family: Ugly Pyramid Scheme Lawsuit Likely to Unfold in Public, and add this tease at the end: “Speaking of The Apprentice, there’s been much ado about the prospect of never-seen recordings coming out as a result of this case (though these tapes may not include the long-rumored and alleged “slur” tapes).

C’mon guys, Mark Burnett is never going to release the tapes from the vault. It is fair to assume that any incriminating tapes may have already been destroyed by now.