I mentioned this in a comment the other day. Lisa Graves, the former chief counsel for nominations for the ranking member of the Senate Judiciary Committee and was deputy assistant attorney general in the Department of Justice, wrote at Slate that I Wrote Some of the Stolen Memos That Brett Kavanaugh Lied to the Senate About:

During the hearings on his nomination to the D.C. Circuit a few months after the Miranda news broke, Kavanaugh actively hid his own involvement, lying to the Senate Judiciary Committee by stating unequivocally that he not only knew nothing of the episode, but also never even received any stolen material.

Even if Kavanaugh could claim that he didn’t have any hint at the time he received the emails that these documents were of suspect provenance—which I personally find implausible—there is no reasonable way for him to assert honestly that he had no idea what they were after the revelation of the theft. Any reasonable person would have realized they had been stolen, and certainly someone as smart as Kavanaugh would have too.

And he did so repeatedly.

Significantly, he did so even though a few years earlier he had helped spearhead the impeachment of President Bill Clinton for perjury in a private civil case. Back then Kavanaugh took lying under oath so seriously that he was determined to do everything he could to help remove a president from office.

Now we know that he procured his own confirmation to the federal bench by committing the same offense. And he did so not in a private case but in the midst of public hearings for a position of trust, for a lifetime appointment to the federal judiciary.

His actions were dishonorable and dishonest.

This week, as part of his efforts to be elevated to the highest court in the land, he has calmly continued to deceive, falsely claiming that it would have been perfectly normal for him to receive secret Democratic letters, talking points, and other materials. And if this absurd notion were somehow true, it would not even be consistent with what he testified to 12 and 14 years ago. Back then, he didn’t state it would have been normal for him to receive secret Democratic strategy materials.

Instead, he explicitly and repeatedly went out of his way to say he never had access to any such materials. These objectively false statements were offered under oath to convince the committee of something that was untrue. It was clearly intentional, with Kavanaugh going so far as to correct Sen. Kennedy when the senator described the document situation accurately.

That’s why—without even getting into other reasonable objections to his nomination—he should not be confirmed.

In fact, by his own standard, he should clearly be impeached.

Lisa Graves was interviewed on the Rachel Maddow Show on Monday night to further elaborate on her piece. Video link. 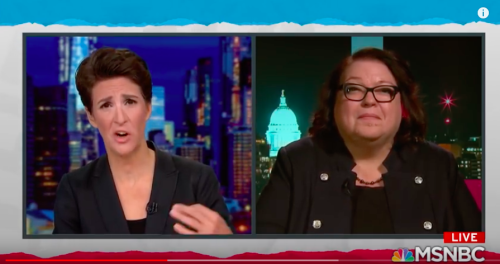 Joan McCarter at Daily Kos explains, When it comes to Kavanaugh nomination, Susan Collins has a self-defined ‘major problem’:

Maine Sen. Susan Collins has made a career of late out of being willfully dumb about Republicans’ true intent. She did it for months on the Affordable Care Act and taxes, and she’s been doing it for weeks on Brett Kavanaugh, the unindicted co-conspirator’s nominee for the Supreme Court. She’s already talked her way into pretending that he’s not going to be the fifth vote on the court to destroy abortion rights, even after the revelations at his hearing last week in which his true beliefs were exposed.

Collins insists that when Kavanaugh mouths the word “precedent” it means something. “He often describes Roe as precedent upon precedent,” she bleats, when Kavanaugh has said, directly that the “Court can always overrule its precedent.” Collins remains steadfast in her determination that he wouldn’t do that. “Roe v. Wade is a case that was decided in 1973 so it’s 45 years old. It was reaffirmed 26 years ago. If you look at how much a part of our society Roe is you could argue it would be very difficult to overturn.” She’s just as convinced Kavanaugh hasn’t lied to her as she was that Mitch McConnell’s promises on healthcare votes were real.

But speaking of lies, here’s where Collins has a bit of a problem—actually, a big one. Because she also says “If in fact (Kavanaugh) was not truthful, then obviously that would be a major problem for me.” There are at least five instances in which Kavanaugh likely perjured himself before Congress. Collins might try to rationalize her way into pretending that Kavanaugh wasn’t lying, but it’s not going to fly back home in Maine.

The most widely read and respected political columnist in Maine, Bill Nemitz, is making sure of that, writing this weekend that the “problem with Collins, as she inches her way toward what looks like a vote to confirm Kavanaugh, is that she’s trying to have it both ways.”

Collins has been playing games with her constituents, and she’s been lying to them.

So Sen. Susan Collins says,“If in fact (Kavanaugh) was not truthful, then obviously that would be a major problem for me.” This begs the obvious question, why is this not a “major problem” for all 100 senators?

Why is this not a “major problem” for our alleged “Conscience Of A Conservative,” Sen. Jeff Flake? Can he in good conscience vote for a nominee who has repeatedly lied under oath to Congress — for a lifetime appointment to the U.S. Supreme Court no less? That’s not a man of conscience, that’s a partisan political hack and a hypocrite.

Democrats Ramp Up Attacks on Kavanaugh’s Honesty After Hearings:

Senate Democrats have added a new line of attack against Supreme Court nominee Brett Kavanaugh, accusing him of misleading or even lying under oath during his confirmation hearing last week.

The topics include his previous testimony from 2004 and 2006 about his involvement in judicial nominations, what he knew about controversial Bush-era programs and whether he received some documents apparently stolen in 2002 and 2003 from committee Democrats.

“It is becoming increasingly clear that Judge Kavanaugh has misled the Senate Judiciary Committee in a number of ways,” Schumer said in a series of tweets Sunday. “This should raise immediate red flags for all Senators and the American public.”

The accusations will almost certainly remain a fixture in the debate over Kavanaugh’s nomination as it continues on the confirmation process this month, but there is little sign they will change any votes in the Senate. Kavanaugh appears on track for a committee vote on Sept. 20 and a confirmation vote before the end of the month, which would solidify the conservative tilt of the Supreme Court.

Sen. Patrick J. Leahy, a member of the Senate Judiciary Committee, went further than Schumer, writing that Kavanaugh gave “untruthful testimony, under oath and on the record.”

The Vermont Democrat spent much of his questioning during the confirmation hearing asking Kavanaugh about whether he had received, when he worked at the White House, any Democratic committee documents obtained by Republican staff member Manuel Miranda in 2002 and 2003.

Leahy said Kavanaugh testified that he never received any documents that appeared to be drafted or prepared by Democratic committee staff, but “he got 8 pages of material taken VERBATIM from my files, obviously written by Dem staff, LABELED ‘not [for] distribution.’”

And Sen. Ron Wyden of Oregon wrote that “Kavanaugh used stolen documents and LIED about it for personal gain. This isn’t complicated. He is unworthy of a seat” on the Supreme Court.

The NAACP called on the Judiciary Committee to investigate the allegations. Brian Fallon, the executive director of Demand Justice and a former Schumer staffer, said Democrats should make a criminal referral to the Justice Department.

The Democratic Coalition, a Democratic SuperPAC, has filed an ethics complaint against Judge Kavanaugh, alleging he gave false testimony not only in this hearing but in other testimony before Congress, including false statements about certain documents said to be stolen from Democratic members of the Senate Judiciary Committee. Perjury Complaint Against Brett Kavanaugh To Be Heard By Merrick Garland:

The complaint will now be heard by none other than Merrick Garland — President Obama’s pick for SCOTUS, who was denied a confirmation hearing.

According to the complaint filed by the Democratic Coalition, records show that Kavanaugh received an email from Manuel Miranda in 2002 referencing the stolen documents and asking Kavanaugh, then a White House lawyer, to take no action in the matter.

In 2003, Kavanaugh allegedly passed information from these documents on to other parties. The emails in question are appended to the complaint. However, at hearings in 2004, 2006, and again on September 5th and 6th of 2018, the document quotes Kavanaugh’s denials that he ever knew these documents existed.

On Saturday the Democratic Coalition released a statement sharing that they had filed a criminal complaint and would submit an additional judicial ethics complaint on Monday — which would be filed with the D.C. Circuit Court — to be reviewed by Judge Merrick Garland, who is the Chief Judge on the U.S. Court of Appeals for the D.C. Circuit.

Kavanaugh and Miranda are accused of using the stolen documents to, in the words of Senator Patrick Leahy, “assist in getting President Bush’s most controversial judicial nominees confirmed.”

The emails, as attached to the complaint, from Miranda to Kavanaugh mention information shared among Democrats on the committee, and there are replies from Kavanaugh acknowledging receipt of these missives. Miranda has responded to questions, saying that he shared the information with Kavanaugh but didn’t mention where he had gotten the intel. Senator Patrick Leahy, whose files were shared with Kavanaugh, said on Thursday that documents Kavanaugh received from his files were clearly marked “not for distribution,” despite his testimony that he had never received any material that “appeared to … have been drafted or prepared by Democratic staff.”

Describing “a congressional record of lies,” the Democratic Coalition’s Scott Dworkin spoke Friday to say that Kavanaugh used the stolen documents to prepare judicial nominees to answer questions from Democrats on the Senate Judiciary Committee, and that he has falsified testimony to Congress to cover up that unethical behavior. If Judge Garland feels there is sufficient cause, he can appoint a Special Judiciary Committee to carry out a formal inquiry into Brett Kavanaugh’s testimony.

Contact Senator Jeff Flake and tell him to vote no on confirming Brett Kavanaugh.

Arizona’s 54th Legislative Session Ends: The Good, the Bad & the...