Earlier this year, Governor Doug Ducey put the kibosh on some anti-vaxxer bills moving through the Arizona legislature. You may recall that this provoked the very special kind of crazy that is regressive Republican Rep. Kelly Townsend (R-Mesa). Governor Doug Ducey is a communist! State Rep. Kelly Townsend says mandatory vaccinations are ‘Communist’: 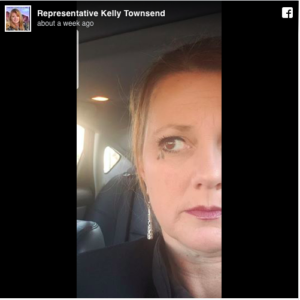 One day after Republican Arizona Gov. Doug Ducey said he was “pro-vaccination,” Townsend, a Mesa Republican, wrote that she’d heard about proposals to “force” people in Arizona to be vaccinated.

“The idea that we force someone to give up their liberty for the sake of the collective is not based on American values but rather, Communist (sic),” she wrote.

Note: The above photo of this publicity-seeking regressive Republican is from her earlier cry for attention. Arizona lawmaker draws teardrops on her face to protest abortion bill: Townsend’s post on Facebook doesn’t make clear whether she’s aware of the gang-affiliation of teardrop tattoos, but in a phone interview she said she is aware of the connotation. Townsend said the teardrops were a “visible reminder of how sad it is that some advocate for infanticide.” Literally no one advocates for “infanticide,” defined as “the crime of killing a child within a year of birth.” Although an infant with measles could very well die from the disease, so maybe anti-vaxxers do in their own peculiar way (“it’s God’s will“).

This publicity-seeking Looney Tune is back at it again, this time retaliating against someone who posted a comment on her Facebook page by trying to get him fired from his job, because freedom of speech!

It all started May 23, when Patrick Mannion wrote — in a now-deleted post on Facebook — that Townsend and another lawmaker “favor child molesters.” That accusation stemmed from their comments toward another lawmaker.

At the time, Sen. Paul Boyer, R-Phoenix, was holding up state budget bills because he wanted in increase the statute of limitations for victims of childhood sexual assault.

Townsend and Rep. Ben Toma, R-Peoria, were captured on a microphone discussing retribution for Boyer and other holdouts on the budget.

“Ben Toma and Kelly Townsend favor child molesters and their right not to be sued by their victims once they’ve recovered — or even fully realized they’ve been victimized,” he wrote on Facebook. “Ben and Kelly would rather stand with child molesters than approve the state budget. And they’ll kill the bills of any AZ state legislators that DO stand against child molesters.”

Townsend was not having it.

“Other people just brush it off,” Townsend said Tuesday in an interview. “That was too low. I will take action. If people don’t like that action, too bad.”

With a little online research she found Mannion worked for Spear Education, a dentistry school, and she called their human resources department.

“I wanted his employment to know exactly what he was doing,” Townsend said, adding that she also wanted to speak to Mannion to demand an apology.

“I would like to know why he felt he needed to go to such lows to lobby somebody who would have voted for this in the first place.”

“Mr. Mannion, it is in your best interest that you issue a public apology immediately for both me and Representative Ben Toma,” Townsend wrote on Facebook.

After Mannion learned Townsend called his work, he wrote a complaint to the Attorney General’s Office, which declined to intervene.

“Her threat was so immediately upsetting to me, that I couldn’t adequately process it,” Mannion wrote to the Attorney General’s Office.

“I believe this Arizona House member illegally attempted to extort me by threatening damage to my career, and when I didn’t comply — or comply quickly enough for her tastes, she attempted to have me fired by abusing her position as a legislator to intimidate my employer into firing me.”

The Attorney General’s Office sent a response from a duty agent suggesting Mannion’s complaint was better addressed by local police.

While Mannion deleted his post that offended Townsend, she took a screenshot of it and continues to post it on her page, demanding an apology.

She ultimately voted for the bill in question and said she obviously never supported sexual abusers. Her initial hesitance on the bill had to do with protecting people from frivolous lawsuits, and she said changes to the bill addressed her concerns.

“I’m all about protecting children,” Townsend said. “That doesn’t mean out of pure emotion I’m going to vote on language that puts others at risk of frivolous lawsuits.”

Townsend continued. “This man is lobbying for a bill with the most disgusting tactics ever. I’ve never seen something so low. … He picked the wrong legislator.”

Oh, someone picked the wrong legislator, alright — the voters of Legislative District 16. Sheesh, what the hell were you people thinking? This woman is an embarrassment to the state. You have got to be able to do better than this.