Kochtopia: The GOP culture of corruption in Arizona

Home/AZ Politics/Kochtopia: The GOP culture of corruption in Arizona
Previous Next

Kochtopia: The GOP culture of corruption in Arizona

The Dark Lord of “dark money” in Arizona, Republican consultant Sean Noble of DC-London, the money laundering bag man at the center of the “Kochtopus” dark money network, has released his minions in the final 10 days of the campaign against Democratic candidates.

The Arizona Republic reports today that “Kochtopus” front group 60 Plus Association, which receives its funding from from organizations with links to the Koch brothers, is dropping another $900,000 into attack ads against Democrat Fred Duval on behalf of the candidate from Koch, Doug Ducey. Newly aggressive DuVal attacks Ducey.

60 Plus has also dropped another $304,000 on attack ads against Clean Elections candidate for Secretary of State, Democrat Terry Goddard, who has promised to clean up dark money in Arizona if elected. $304,000 ‘dark money’ ad attacks Goddard.

According to 60 Plus tax filings, the Koch-linked organization American Encore (formerly known as the Center to Protect Patient Rights, founded by Sean Noble) reported giving $2.6 million to 60 Plus in 2012.

The Washington Post described  the Center to Protect Patient Rights as a “major cash turnstile [i.e., money laundering] for groups on the right during the past two election cycles,” because it received large amounts of money from Freedom Partners and TC4 Trust as part of the $400 million Koch political network. Koch-backed political coalition, designed to shield donors, raised $400 million in 2012. 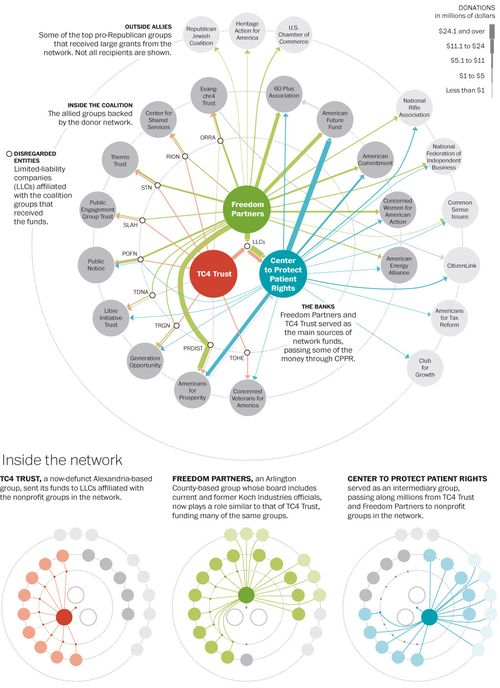 In 2012, Sean Noble’s Center to Protect Patient Rights was the conduit for an $11 million campaign money laundering scheme that was only revealed after the California Fair Practices Commission filed suit against one of its donors and recipients, Americans for Responsible Leadership. It was California’s Biggest “Campaign Money Laundering” Scheme in history.

Noble evaded criminal prosecution for money laundering by having these “Kochtopus” front groups agree to pay California a fine.

Wnuck was an unsuccessful candidate for Congress.

State Treasurer Doug Ducey, who is heading the anti-204 effort, said the current board also includes Kirk Adams, the former speaker of the Arizona House and, like Wnuck, an unsuccessful congressional candidate.

Ducey dismissed questions of whether Arizona voters are entitled to know who provided the $750,000 to his campaign. He said all he and the voters need to know is that the cash came from Americans for Responsible Leadership.

“If you want more detailed information beyond that, that really is a question for Americans for Responsible Leadership,” Ducey said.

The Arizona Republican Party is a wholly owned subsidiary of the “Kochtopus.” The hub of the “Kochtopus” dark money network is in the state of Maricopa. Republicans have turned Arizona into “Kochtopia,” a land where political corruption rules and democracy is undermined.

If you truly want to end the corruption of our political process by secretive dark money networks, the only way to end this GOP culture of corruption in Arizona is to reject Tea-Publican candidates for office. Krush the Kochtopus: Just say no to its ‘dark money’ candidates.

Elect Democrats to office who will seek to regulate dark money, require transparent disclosure of donors, and who will prosecute these money launderers to the full extent of the law.