Home/AZ Congressional Delegation, AZ Politics, Education/Kyrsten Sinema is the Democrat who can Beat McSally for US Senate
Previous Next 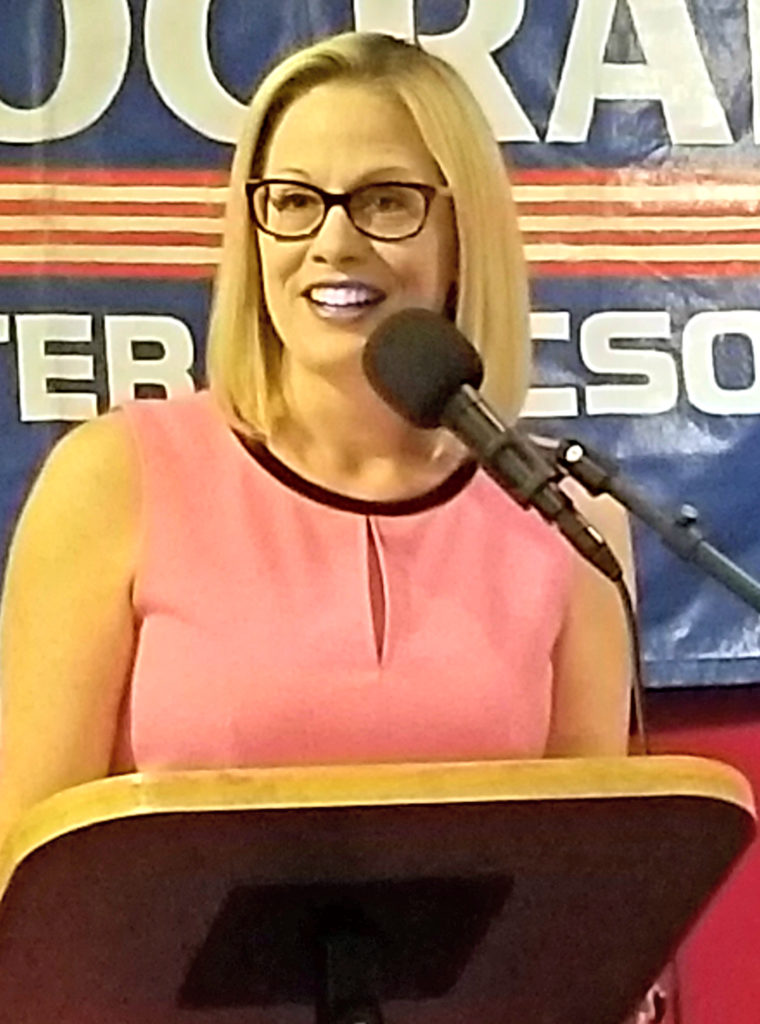 Congresswoman Kyrsten Sinema is running for US Senate.

Congress member Kyrsten Sinema is the odds-on favorite to beat the gaggle of wacky Republicans, including mean Joe Arpaio, kooky Kelli Ward and seldom-seen Martha McSally for the US Senate seat for Arizona.

Sinema spoke at the Democrats of Greater Tucson and was poised, intelligent and articulate. “I launched a campaign for Senate to cut through the chaos and dysfunction in Washington and finally get some stuff done. The enthusiasm on the ground is like nothing like I’ve seen before. Our campaign is building a statewide team we’ll need to reach voters who are more motivated than ever to make a change,” she said.

Sinema is a three-term Congresswoman from the 9th Congressional District in Phoenix, first elected in 2012. A member of the Democratic Party, she served in both chambers of the State Legislature, being elected to the Arizona House of Representatives in 2004 and the Arizona Senate in 2010.

She has a compelling personal story of growing up homeless in a gas station. Saying, “I knew I could make it if I got a good education,” she went to BYU with the help of student loans, academic scholarships, and financial aid, and then ASU, where she now teaches Legal Issues in Social Work.

“I am a product of the American dream. And my way of paying my debt to society is public service.  It is my commitment as a United States Senator that I will continue to do the work as I have done to be accountable, to listen even to people with whom I disagree, and to make best decisions in the best interests of my community,” she says.

A formidable fundraiser (she has $5,149,035 on hand for 2018), she is the front-runner in the race for the Senate seat being vacated by Republican Jeff Flake. She is competing in the primary with Democrats Deedra Abboud, Bob Bishop, and Chris Russell.

On the Republican side, disgraced Sheriff Arpaio and loathsome candidate Kelli Ward will fight over the right fringe of the party, and are likely to be defeated in the primary by Trump-supplicant Martha McSally and her Koch brothers funding.

According to the March 21, 2018, Public Policy Polling survey, voters prefer Democrat Kyrsten Sinema over Republican Martha McSally 46%-41%. Among voters who say that health care is the most important issue, Sinema’s lead grows to 71%-17% over McSally. Health care is ranked as a top issue for 68% of Arizona voters (21% saying it is the most important issue and another 47% saying it is very important).

McSally is little-known outside of Tucson, where is rarely seen by her own constituents. Her legislative record is thin (primarily claiming that she kept the A-10 airplane at the air base) except for her treacherous vote to repeal the Affordable Care Act in May 2017. McSally’s campaign has $1,816,668 on hand.

Sinema predicts a tough race for US Senate, pointing out that Democrats haven’t won a Senate seat since 1994 and haven’t won a statewide race since 2008. “To win in November we must make sure that every Democrat knows the importance of this election and votes in November 2018. The good news is there’s so much energy and excitement, you can feel it all over Arizona,” she says.

Sinema is known as an independent thinker, not always voting with the party line and working across the aisle with Republicans. “I do not regret any of the votes I’ve taken in Congress, because when I take a position, I base it on what’s in the best interests of my community and my constituents, not on what party leaders want me to do.”

“I also don’t care whether a vote I’m making aligns with any given president or members of Congress. What I care about is whether the vote aligns with the community I serve. I believe very firmly I should always put my country before party, whether somebody is on the other side of the aisle makes no difference. What matters is doing what’s right.”

She is working with Democratic Congressman Mike Thompson of California, Chairman of the House Gun Violence Prevention Task Force, to fix the NICS background check system for gun purchases. “Right here in Arizona people who are domestic abusers, violent felons and those who are dangerously mentally ill can still get access to weapons,” she said.

She also supports the STOP act which allocates funding for schools to hire mental health professionals. “Only about 5% of mentally ill people pose a danger to themselves or others. We will make sure that these people cannot get weapons, and will create a system that raises red flags for those who are facing these mental illnesses and not getting the help they need.”

McSally has an A rating from the NRA and took $77,063 in donations from the gunmaker lobby.

Sinema is an original co-sponsor of the Dream Act, which gives DACA recipients a path to citizenship. “They should not be forced to leave the only country they call home,” she said. “They deserve a shot at being Americans.”

She is also a co-sponsor of the USA Act (Uniting and Securing America Act). This bipartisan, bicameral bill protects DACA recipients from deportation while implementing new commonsense border security measures through enhanced technology, manpower and physical barriers where necessary.

Regarding recent raids by ICE, she says, “I support the work ICE when it is targeted toward people who are a threat to our country. So if an individual engages in criminal activities, like committing dangerous felonies like raping and murdering, they should be arrested, detained and deported.  But individuals who are here because their status has expired, for example the Dreamers, they should not be targets. They have done nothing wrong. They are hard working individuals who are doing their best to make it.”

The Navajo Generating Station in Northern Arizona will be closing down in 2019. “I’m committed to working with the Navajo and Hopi communities to find new job opportunities for those individuals before they lose their jobs. So as we move toward a cleaner energy future, I want to be very mindful about ensuring we’re taking care of those families who will be impacted by lost jobs,” she says.

Marion Chubon, the founder of the Represent Me AZ PAC, noted that McSally has refused to agree to an public town hall for 1,000 days. Sinema said, “I’ve been in Congress for six years. We have made access and transparency a primary part of the work we do. Our office is open. I’ve made it a priority to meet with constituents myself. It’s important to be accountable and transparent.”

“I’m very concerned about a trade war because it would devastate Arizona. We are heavily dependent on trade for so much of our income. Our largest trade partner is Mexico, and our second largest is Canada. The president’s renegotiation of NAFTA is concerning, and I want to make sure it’s done in a way that benefits Arizona workers.”

“It is true that China is a bad actor on the global stage. They steal patents, they don’t play fair and they manipulate their currency, so it is important to hold China accountable for its bad acts. But I believe that launching a trade war and launch a fight over tariffs could be problematic and dangerous. I’ve been urging my colleges on both sides of the aisle to communicate with the Administration about the importance of being thoughtful and careful about the actions and impacts this could have on the United States.”