The UK Parliament returns from its summer break on Tuesday, returning to a chaotic showdown today.

CNN reports Britain’s crazy Brexit crisis is about to get crazier:

All of this sets up an epic clash between Johnson’s critics and supporters in Parliament.

The drama could play out in a number of ways. But first up, opposition lawmakers will need to wrest control of the day’s agenda, calling for an emergency debate — also known as a Standing Order 24 or SO24.

But it’ll be up to House of Commons Speaker John Bercow — a larger-than-life character in British politics — whether or not to grant an emergency debate. Given Bercow’s sympathetic view of the role that dissident voices play in Parliament, it seems likely he will allow it.

Assuming lawmakers succeed in calling that debate, they’ll need to quickly push through a bill blocking a no-deal on October 31. The text of that bill, which is expected to be backed by a group of opposition and rebel Conservative lawmakers, was published Monday night.

The purpose of the Bill is to ensure that the UK does not leave the European Union on the 31 October without an agreement, unless Parliaments consents, ” the lawmaker said on Twitter.

If no agreement has been concluded with the EU, or if parliament hasn’t approved a no-deal Brexit by October 19, “then the Prime Minister must send a letter to the President of the European Council requesting an Article 50 extension until 31 January 2020,” Benn said.

“The Bill has cross-party support from MPs who believe that the consequences of No Deal for the economy and the country would be highly damaging,” Benn continued.

The Benn bill would force Johnson to seek an extension to the Brexit process until January 2020 if he failed to agree a new deal with the EU at a summit scheduled for mid-October, or to seek Parliament’s consent for for a no-deal Brexit. The latter scenario is unlikely given that a majority of MPs opposed a no-deal Brexit in previous votes. 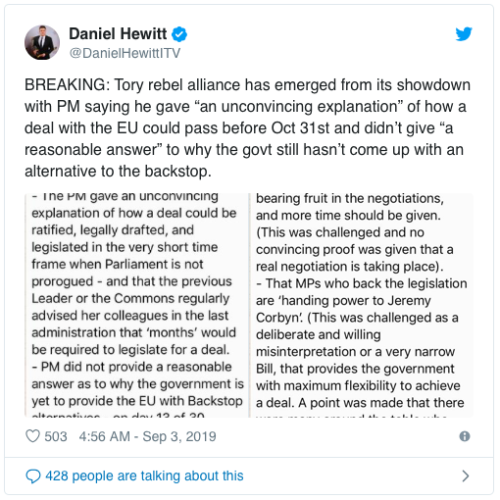 Liz Saville Roberts, the Plaid Cymru leader at Westminster, was one of the opposition leaders who met Jeremy Corbyn this morning to discuss tactics this week as they seek to rule out a no-deal Brexit. She has just told Sky News that she is confident that the opposition will be able to pass the Benn bill, designed to rule out a no-deal Brexit on 31 October, by the end of this week.

More significantly perhaps, she also implied the opposition parties have agreed not to vote for an early general election until the bill has become law. She said:

When asked if Corbyn backed this approach, she replied: “We were in agreement.”

Johnson cannot call an early election without opposition support. Under the Fixed-term Parliaments Act, the easiest way to get around the rule saying the next election should not take place until 2022 (five years after the last one) would be for two-thirds of MPs to vote for an early election. That could not happen if opposition MPs voted against, or abstained.

Alternatively, under the FTPA, the government could lose a vote of no confidence, and an election would take place if no alternative government won a confidence vote within 14 days. But Johnson would not want to tell his MPs to vote against him in a confidence motion because that could lead to someone else becoming prime minister.

If the rebels’ bill gets through the House of Commons, it would head to the House of Lords where “the possibility of filibustering — or time wasting — is greater,” said Professor Tony Travers, director of the Institute of Public Affairs at the London School of Economics.

Parliament doesn’t meet on Fridays, so Thursday would be the last sitting this week, though there is a possibility of an emergency sitting into the weekend.

Even if a law blocking no-deal did pass the House of Lords, senior government ministers — including Michael Gove and Gavin Williamson — have suggested the government could ignore it.

Indeed such a law could be challenged, “and the whole thing would head off to the courts,” said Travers.

Prime Minister Boris Johnson on Monday signaled that he is prepared to call a high-stakes snap election next month if his political opponents try to block his plans for Britain to exit the European Union on Oct. 31.

Johnson on Monday said publicly that he did not want an election. But he made his intentions clear to his cabinet and other staff amid a rising and emotional stalemate over his handling of Brexit. A senior member of his government said that if Johnson’s opponents are successful in delaying Brexit, “the inevitable consequence of that will be an election.”

[As noted above, he cannot do it without opposition support, and they have agreed not to vote for an early election until the Benn bill becomes law.] 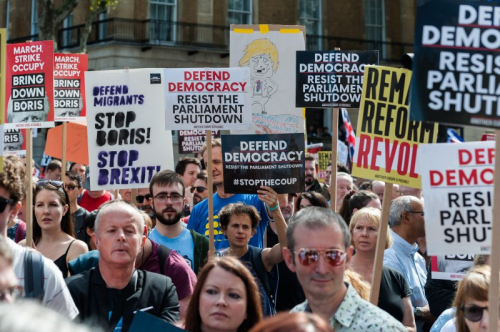 Most lawmakers in Parliament oppose leaving without an exit plan, something many analysts say could be economically damaging and lead to food and medicine shortages. Johnson has dismissed those predictions as fearmongering.

Corbyn’s efforts to block a no-deal Brexit, or seek an extension beyond Oct. 31, will be aided by a faction of Conservative members of Parliament opposed to Johnson’s position [the rebel alliance.]

A cross-party group of a dozen members of Parliament plans to propose legislation on Tuesday asking the government to seek a three-month extension of the Brexit deadline, according to a draft of the proposal circulated Monday evening by Labour legislator Hilary Benn.

Johnson accused his opponents of seeking “yet another pointless delay.”

“There are no circumstances in which I will ask Brussels to delay. We are leaving on 31 October, no ifs or buts,” he said.

Benn said that it was “absolutely extraordinary” for Johnson to say that under no circumstances would he ask for a delay. “If the bill passes, it would require him by law to do that,” he told the BBC. “Either we have a prime minister who accepts the rule of law, or we don’t.”

Johnson has a tiny working majority in Parliament — just one vote. He was not elected by the British people, but by a vote of Conservative Party members choosing a new leader after Theresa May stepped down as prime minister over her failure to deliver Brexit.

Johnson has employed tough tactics, threatening on Monday to kick members of Parliament out of the Conservative Party if they don’t support him.

Conservative rebels reacted angrily to Johnson’s threat, which would mean they could not run as Conservative candidates in any upcoming election.

A veteran member of Johnson’s Conservative government quit his role Thursday morning, stating that he was deeply concerned about the suspension. Johnson’s critics accused him of using the procedure to subvert parliament and prevent lawmakers from finding a way to prevent the U.K. from leaving the EU without a deal. George Young, who has served in every Conservative government since Margaret Thatcher was prime minister, resigned on Thursday, writing: “I am very unhappy at the timing and length of the prorogation, and its motivation … I believe [it] risks undermining the fundamental role of parliament at a critical time in our history, and reinforces the view that the Government may not have the confidence of the House for its Brexit policy.” The leader of the Scottish division of the Conservatives, Ruth Davidson, also announced her resignation Thursday. Davidson was once touted as a future prime minister, but quit her role saying she wants to spend more time with her family.

Nick Boles, a former Conservative legislator who quit the party over Brexit, told the BBC that Johnson’s tactics mean the party has been “taken over” by the “hard right.”

“The Conservative Party has fallen prey to an almost religious obsession with the hardest form of Brexit, which is obviously a Brexit with no deal,” he said in a radio interview Monday.

A key Johnson opponent, Nicola Sturgeon, leader of the Scottish National Party, tweeted after Johnson’s statement: “Plainly obvious from that statement that Johnson has no plan to get a deal. If MPs blink tomorrow, he will drive the UK off the no deal cliff on 31 October. He must not get away with it.”

This week’s battles in Parliament will also center on Johnson’s plan to suspend Parliament for five weeks, starting sometime next week. Corbyn and other enraged opponents have called that an attack on Britain’s democracy.

A suspension of Parliament is not unusual, but the length of this year’s shutdown — at a time when Britain is facing its biggest political decision in decades — is highly unusual.

Former British prime minister John Major said Friday he would try to join a legal bid to prevent a suspension of Britain’s parliament just weeks before Britain is due to crash out of the European Union. Former British leader joins bid to derail shuttering of Parliament amid Brexit crisis:

The former Conservative leader announced he would take on his successor, Prime Minister Boris Johnson, who announced the controversial decision to shutter Parliament for over a month in the middle of one of Britain’s biggest political crises in generations.

It was an extraordinary intervention by a former leader of Johnson’s Conservative party, akin to a former Republican president mounting a high-profile legal assault against the decisions of a sitting one. Johnson’s decision to suspend Parliament has triggered a number of legal challenges by those who claim the action is unlawful and unconstitutional.

Major said in a statement that he intended to ask the High Court in London if he could join a legal battle initiated by the business executive Gina Miller, who has had anti-Brexit triumphs in courts in the past.

Corbyn said Monday that he feared Johnson’s willingness to accept Brexit without a deal.

“A no-deal Brexit is really a Trump-deal Brexit, leading to a one-sided United States trade deal that will put us at the mercy of Donald Trump and the biggest American corporations,” he said.

Corbyn said that in Johnson, “Trump has found a compliant British leader who will dance to his tune.

“Unless we stop Johnson’s Tory government now it’s a headlong rush into the arms of Donald Trump,” he said.

You may want to follow BBC News today for coverage of what happens, since the US news is consumed by wall-to-wall coverage of hurricane Dorian.

Nathan Davis would like to bring a Teacher’s Voice to the...

My Darkest Concern: The Pandemic Coup