Landmark Pot Legalization Expected to Pass in the House This Week

Landmark Pot Legalization Expected to Pass in the House This Week

A historic House vote to end the federal prohibition of cannabis is expected to pass this week.

It would mark the “first time that the House or the Senate has ever voted as a full chamber on legislation to end the federal cannabis prohibition since it went into effect following the passage of the Controlled Substances Act of 1970,” writes Leafly’s Bruce Barcott.

The Act is largely symbolic as it is expected to die in McConnell’s graveyard Senate. The Majority Leader has says that no pro-pot legislation would pass while he’s in power.

“I’ve been working on this issue longer than any politician in America and can confidently say that the MORE Act is the most comprehensive federal cannabis reform legislation in U.S. history,” says Representative Earl Blumenauer, (D–Ore.), co-chair of the Congressional Cannabis Caucus.

“National support for federal cannabis legalization is at an all-time high,” he adds. Two-thirds of Americans support marijuana legalization, according to a Nov. 14 report from Pew Internet Research.

Blumenauer and Representative Barbara Lee (D-Calif.)—who also wrote parts of the legislation—says the bill is a racial justice proclamation.

The MORE Act would impose a 5 percent sales tax on cannabis. The revenue would go to programs created to help people “adversely impacted by the War on Drugs.”

They would receive job training, legal aid, drug treatment for opioid addiction, and other social services. 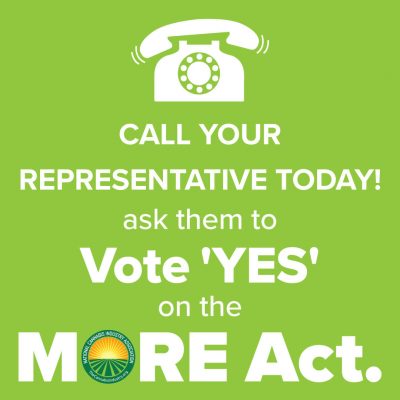 Sample script to help guide your call at https://bit.ly/37x12MO

“This really sets out a process for equity in the industry,” she says.” This is a job-creating industry, and it also provides economic opportunities for minority-owned business.”

Vice-president elect Kamala Harris introduced the bill’s Senate version even though her boss, Joe Biden, won’t use his executive privilege to legalize pot.

The Supreme Court has ruled that rescheduling cannabis and legalizing it is Congress’ job.

“Most recently, in October, the Supreme Court declined to hear an appeal in Washington vs. Barr, a petition challenging cannabis’ Schedule I classification that lower courts have also shot down, writes Forbes’ Chris Roberts.

“Advocates have taken this to mean that the courts believe rescheduling is Congress’s job,” Roberts writes.

Obama Would Not Prosecute Pot Growers and Sellers

President Obama allowed the cannabis industry to grow exponentially by advising United States Attorneys in his Cole Memorandum that the Justice Department would not prosecute pot growers and sellers in states where it was legal.

Researchers say young people under 40 – no matter what political party –overwhelmingly favor pot legalization as do baby boomers, who have been inhaling their doobies since the ’60’s.

It’s expected that New York and New Jersey, bleeding from the effects of the Coronavirus, will legalize pot next year as a revenue source.

African American Crystal People’s-Spokes, who is the Majority Leader for the New York State Assembly, told Governor Cuomo last year she would not support any pot legalization unless minorities were granted licenses and their communities reaped the benefits.