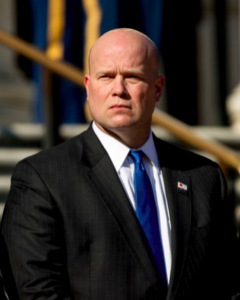 Now, Mr. Whitaker’s appointment is facing a court challenge. The State of Maryland asked a federal judge on Tuesday for an injunction declaring that Mr. Whitaker is not the legitimate acting attorney general as a matter of law, and that the position — and all its powers — instead rightfully belongs to the deputy attorney general, Rod J. Rosenstein.

Mr. Trump may not “bypass the constitutional and statutory requirements for appointing someone to that office,” the state said in a court filing.

Maryland is asking a judge — Ellen L. Hollander of the Federal District Court for the District of Maryland, a 2010 Obama appointee — to rule on who is the real acting attorney general as part of a lawsuit in which it sued Mr. Sessions in his official capacity. Because Mr. Sessions is no longer the attorney general, the judge must substitute his successor as a defendant in the litigation, so she has to decide who that successor legally is.

It is not entirely clear to me how the state of Maryland establishes standing to bring this lawsuit. Standing is not a problem, however, for three Democratic Senators on the Senate Judiciary Committee who filed a separate lawsuit on Monday. Democratic Senators Challenge Whitaker Appointment in Court:

The senators — Richard Blumenthal of Connecticut, Mazie K. Hirono of Hawaii and Sheldon Whitehouse of Rhode Island — sit on the Judiciary Committee, which conducts confirmation hearings for attorney general nominees. They argued that an official who had not been Senate-confirmed could not run the Justice Department, even temporarily.

“Because the Senate has not consented to Mr. Whitaker serving as an officer of the United States, his designation by the president to perform the functions and duties of the attorney general violates the Appointments Clause” of the Constitution, the complaint said. “If allowed to stand, Mr. Whitaker’s appointment would create a road map for the evasion of the constitutionally prescribed Senate advice-and-consent role.”

Last week, litigants in at least two pending, unrelated lawsuits against Mr. Sessions in his official capacity submitted motions asking judges to declare that by law, Mr. Rosenstein should be his rightful acting successor and so his name, not Mr. Whitaker’s, should be substituted as the defendant in the litigation. One such motion was filed in the Federal District Court for the District of Maryland, and the other in the Supreme Court.

Lawyers on Friday brought a challenge to the validity of President Donald Trump’s appointment of acting attorney general Matthew Whitaker to the Supreme Court.

“Because Whitaker’s appointment does not satisfy the Appointments Clause, it is unlawful, and he cannot serve as Acting Attorney General,” the lawyers wrote in Friday evening’s filing.

The issue is being brought to the Supreme Court in Barry Michaels’ pending petition for certiorari in a case challenging the federal law barring possession of a gun by a felon. In addition to Michael Zapin, Michaels’ lawyer on previous filings, Tom Goldstein and his colleagues at Goldstein Russell joined in Friday’s filing.

Goldstein and the firm earlier this week had joined the Maryland attorney general in challenging Whitaker’s appointment in a different case before a trial judge. They argued in that filing that the appointment violates both a federal law setting the order of succession at the Justice Department — it includes only other people whose positions require Senate confirmation — and the Constitution’s Appointments Clause, which requires the Senate to provide advice and consent on principal officers of executive branch departments. Whitaker, as Sessions’ former chief of staff, was not confirmed by the Senate for his position.

In Friday’s filing at the Supreme Court, the lawyers made similar arguments, specifically raising the issue by asking the court to declare that Deputy Attorney General Rod Rosenstein, and not Whitaker, should be substituted as the respondent in the case for those reasons.

Additionally, the lawyers also ask the justices to take up the case without waiting for lower courts to rule, as it ordinarily would, because the issue is “a pure question of law” and could arise in “thousands” of cases.

Noting the many “personal responsibilities” of the attorney general, they warn, “If this Court declines to resolve this question immediately and instead determines several months in the future that Mr. Whitaker’s appointment was always invalid, then ‘unwinding’ all of those personal orders would be a fraught and disruptive exercise that could embroil the federal courts in innumerable collateral disputes.”

For more on the posture of this case before the U.S. Supreme Court, see Steve Vladeck at SCOTUSblog.com, Whitaker appointment dispute reaches Supreme Court, who concludes:

This issue therefore seems likely to reach the Supreme Court eventually. But the Michaels motion asks the justices whether they really want to wait that long. If they do not, then formally identifying the proper respondent to a petition for certiorari would certainly allow them to settle the matter once and for all.

The new lawsuit, filed in the Federal District Court for the District of Columbia, was brought on behalf of the senators by two watchdog groups, Protect Democracy and the Constitutional Accountability Center. They maintained that the lawmakers had legal standing because their constitutional authority to cast confirmation votes for senior government officials had been nullified.

“If the practice undertaken in this matter is upheld, it creates a road map for deliberately going around the constitutional requirement for advice and consent,” Mr. Whitehouse said in an interview.

The case was assigned to Judge Trevor N. McFadden, a Trump appointee.

A Justice Department memorandum attempts to push back, pointing to various examples of temporary appointments dating back to the earliest days of American history, although it acknowledges that there was very little precedent for an acting attorney general who did not undergo confirmation.

There was such an acting attorney general in 1866 for several days, but that was before Congress had created a Justice Department for that official to supervise.

In an interview, Mr. Blumenthal said that most of the historical examples the administration had cited involved short-term appointments demanding immediate attention whose constitutional legitimacy was never tested in court. He also argued that the attorney general’s special powers set that office apart.

“In modern times, this kind of appointment is unprecedented, certainly for an office of this importance,” he said.

In the House, where Democrats will assume control in January, they may soon have more leverage. Representative Jerrold Nadler of New York, the incoming chairman of the Judiciary Committee, has pledged <amhref=”https://www.nytimes.com/2018/11/11/us/politics/matthew-whitaker-russia-mueller-democrats.html?module=inline”>to make Mr. Whitaker his first hearing witness and to subpoena him if necessary. He has warned that there would be consequences for firing Mr. Mueller.

And in a series of letters, Mr. Nadler and other soon-to-be Democratic chairman have put the Justice Department and the White House on notice that they intend to investigate the circumstances of Mr. Sessions’s removal and replacement, and will request access to communications related to both.

This dispute appears likely to be resolved before the 210 days for a temporary appointments under The Federal Vacancies Reform Act of 1998, upon which the Trump administration wrongly relies upon.

As the Michaels motion makes clear, “The Federal Vacancies Reform Act of 1998 does not override or otherwise displace the mandatory order of succession set forth in the Department of Justice succession statute, codified at 28 U.S.C. § 508. And even if it did, the appointments clause of Article II of the Constitution does not allow for officials who have not been confirmed by the Senate to exercise the functions of a principal office, like the attorney general, on a temporary basis so long as no exigency precludes another, Senate-confirmed officer from doing so.” (h/t SCOTUSblog).

This would be Deputy Attorney General Rod Rosenstein, who was previously supervising the Mueller probe.

In an editorial opinion, the New York Times argues that “The real question isn’t whether the acting attorney general’s appointment is lawful, but whether it is part of a broader attempt to subvert the rule of law” (it is). Matthew Whitaker and the Corruption of Justice:

But all of this debate, hairsplitting and litigation distracts from a more persistent question: Is it O.K. for a president to shut down an investigation of himself? To answer that question yes is to take the position that not only this president, but any president in the future, is free to take the law into his own hands.

Congress could pass a law to prevent the president from firing Mr. Mueller, but Mitch McConnell, the Senate majority leader, has shown no interest in doing that.

As Mr. Trump continues to work to undermine this investigation, Mr. McConnell and his fellow Republican leaders should pause to consider the standard, and the precedent, they are at a growing risk of setting.

These Republicans are co-conspirators or accessories after the fact who are aiding and abetting Trump’s abuse of power and obstruction of justice. Bring charges against them all and “drain the swamp.”