Lesson from a teacher: Vote YES on Prop. 208, Invest In Ed

Home/AZ Politics/Lesson from a teacher: Vote YES on Prop. 208, Invest In Ed
Previous Next

Lesson from a teacher: Vote YES on Prop. 208, Invest In Ed

Back in 2008-2009, Arizona was slammed by the impact of our national recession. Leaders had to determine the best and most efficient ways of balancing our state budget. Our governor, Doug Ducey, decided to put this massive load on the backs of our children and teachers. Public education – both K-12 and higher education – were the victims he selected to take the brunt of the hit. We have still not recovered.

Personally, I was affected by this devastating evisceration of public education. In 2009 I was a special education teacher in the Cave Creek school district. I had just enough seniority not to lose my job. But I did have to leave my school of five years due to budget cuts — when it was decided one special education teacher could effectively serve all the students with special needs in an entire school.

Across the Valley, good teachers with little seniority were kicked out of this noble and respected profession because they were easy victims with little recourse. When a handful of teachers objected to this treatment, educators  as a profession were directly attacked by those in power. What little leverage teachers had was snatched away.

Once upon a time, teachers headed into the summer to turn in their contracts for the upcoming year – to explore other opportunities if desired. Now, contracts must be returned mid-March. Should you find a better opportunity elsewhere, you better be prepared to pay thousands of dollars to get out of your contract.

This disdain of educators is continued by the majority of our elected officials to this day. Year after year, they ignore the fact that Arizona is near-bottom in every public education funding metric. Then they voted to toss a few scraps of a budget to public education, which they promote to the sky: Look what WE did!!! And they attack others for not being okay with those scraps.

Year after year – this is the cycle. Public education asks to be properly funded. The legislature turns a blind eye while giving peanuts to our schools. They seem completely astounded when real pro-public education legislators and advocates rebuff the scraps.

Which brings us to the current Invest in Education initiative – on the ballot as Proposition 208. For years we have been looking to the powers-that-be to do the right thing for public education. For years we have been denied. The scraps continue. And we as educators – like that pledge in Animal House – grab our ankles and say, “Thank you, Sir. May I have another?” And the proverbial welts on our backsides grow. Waiting for the legislature to do the right thing by public education has grown old, tired, and pointless. 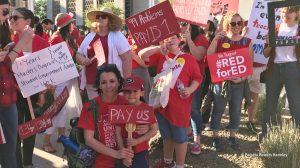 We hoped that the massive Red For Ed Movement of 2018 would send a loud and clear message. Public education in Arizona is a national embarrassment. Educators are professionals doing an essential and honorable service – for our children, or community, and our future. Of course, it was ignored. Of course, the scraps continued.

When our citizens demanded that something be done to fund public education, Arizona legislators found other things to do that were far more important – like voter suppression, more vouchers for private schools, and making lemonade the official state drink. Any bills that dared broach the subject of funding schools better were shoved into a desk drawer, never to see the light of day again.

The Chamber of Commerce and some business associations were approached to come up with some ideas that will satisfy the stakeholders and help support public schools. What plan did they come up with? Absolutely nothing. So, if you’re not happy about this – talk to these people. Their inaction led to our course to do it ourselves.

Options that were rejected

The authors of this initiative looked at many options to create the sustainable cash flow needed by Arizona schools.

So before getting into the details of what this powerful and far-reaching education initiative does, let’s spend a little time focusing on what it doesn’t do. Because the “lies and misinformation train” about Prop 208 has already left the station. We need to derail this nonsense so that the BS doesn’t spread far and wide.

First, it will not raise taxes on everyone.  Opponents are already spreading the word that everyone’s taxes are going up drastically. It’s amazing that they can say this knowing it’s not true – but they don’t care about that. They just want everyone they are trying to reach to believe them. So, if you are a person that makes anywhere from $1.00 per year to $249,999 per year – you will not see a tax increase. Married couples making from $1.00 per year to $499,999 per year will not see a tax increase. Proposition 208 will not increase taxes for these people. Period. End of Argument.

Next, this proposition will not double anyone’s taxes. To repeat, if you make less than $250,000 there is no tax increase.

So now that the hateful urban legends of Invest In Ed have been debunked, let’s turn to what it will accomplish. The goal of this proposition was to create a sustainable revenue flow that will go directly to education without the possibility of the legislature diverting these funds elsewhere. Funds from the lottery and sale of state land are supposed to go to fund public education, but they rarely end up there – always moved to fund some other thing. Not this one – these funds can go nowhere else – only to public education.

According to estimates from the Arizona Department of Revenue, the amount of funding this proposition will give directly to public education is approximately $940 million annually. This is an incredible number. It is unmatched by anything that anyone else has proposed, anywhere at any time in the past decade. What the powers-that-be refused to do, the people did.

So where does this money go?

The funds collected will be used in the following ways:

As an educator, these bulleted points make my head spin. Arizona teachers have been treated like the proverbial black sheep of the family for so long that to see something that really addresses the needs of public education in Arizona is pretty euphoric. Imagine – paying teachers like the educated professionals that they are! Imagine – paying critical support staff a real living wage that makes working in education preferable to working at In-N-Out Burger. The current wages paid to them are an embarrassment.

As a special education teacher, I can tell you that paraprofessionals working with students with special needs are so vitally important to the education and progress of these kids. They need to be paid accordingly.

Next, Prop 208 requires that funds must be used for training, mentoring, retention, and scholarships. This is incredible. Teachers of Arizona leave this profession far too often and far too quickly. Maybe they wouldn’t with good pay, training opportunities, a good mentor to guide them through those difficult early years – and scholarships to help them get there, stay there and move up on salary schedules.

Arizona is at or near the bottom of every public education metric. It wasn’t always this way. But for more than a decade, public schools have become a tiresome nuisance to our representatives. Many years ago, a teacher involved in the school unions told a gathering of teachers that, while no one would publicly admit it, nothing would please elected officials more than for public education to go away. In the 10+ years since he said that, I’ve heard nothing that disputes his claim – and their inaction only backs it up.

Arizona students deserve better than what they have received since I entered this profession back in 2004. Arizona teachers – an incredible bunch of true professionals who care about their profession as much as any other I’ve ever seen – deserve better than being misunderstood, underpaid, under-appreciated, and under-supported. To pass Proposition 208 would be a nice way of saying public education in Arizona matters.

Here is an interesting side note about teachers in Arizona. A couple years ago, when Red For Ed ruled and teachers demanded respect, they were often greeted with contempt. They were called glorified babysitters and greedy losers. Now, the parents are espousing how crucial the teacher/student relationship is in their desire to get their children back in the actual physical classroom. I hope they remember how crucial teachers are on or before November 3rd when Proposition 208 asks them to put their money where their mouth is.

Attacking us with lies

What is truly sad about the people who oppose this plan is that they do not – because they cannot – debate the merits of the proposition.

By spreading the truth about the proposition, voters will support it. Even today, with all the concerns the COVID pandemic has thrown at people, education is still a voting priority. So, the truth must out.

Yes on Proposition 208 is a Yes vote for the future of Arizona.

About the Author: Jeff Fortney