Michael Bryan has addressed in earlier posts the misguided emphasis by the Chamber of Commerce and their Republican allies to give businesses what will essentially result in immunity from legal liability for their actions, or inaction, in protecting their employees or their customers from the spread of the coronavirus.

Just the opposite emphasis should apply. The emphasis should rightly be on what employers should be required to do to protect their employees and customers, establishing a reasonable standard of care.

With the reopening of restaurants, retail, and other businesses, we are likely to see more of this occurring. Giving businesses a “get out of jail free” card, or what amounts to a “license to kill” its employees, which is exactly what President Trump’s executive order requiring meat packing plants to remain open amounts to, Trump’s order to reopen meatpacking plants caused a huge coronavirus outbreak among workers, is not the answer.

Paul Waldman at the Washington Post explains how The GOP plan would increase coronavirus spread and slow economic recovery: 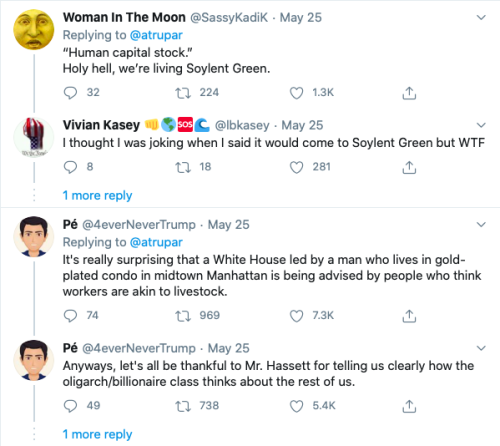 (Yes, I am well aware that this is an economic term, but the way Hassett wields it cannot help but connote images of slavery and human chattel).

It’s not a plan to stop the spread of the novel coronavirus, or a plan to give direct assistance to struggling Americans, or a plan to ensure that state budgets don’t collapse.

You know, the important things that Congress should be concerned about addressing ASAP.

Instead, it’s a plan to make sure no one is allowed to sue businesses for what they did or didn’t do during the pandemic.

It’s called “liability protection,” the new incarnation of the old conservative goal of “tort reform,” the euphemism for chaining the courthouse door to prevent people from suing when they get harmed. Not only is it morally indefensible, right now it’s also the worst possible way to help the American economy get back on its feet.

McConnell calls it a “red line” for the passage of any new rescue measure, essentially telling Democrats that if they want to do any of the things that would actually help the economy, the price will be sweeping immunity for businesses from any accountability during the pandemic.

So “Moscow Mitch” is taking hostages and extorting ransom again, just like he did with the previous government shutdowns. How long are Americans going to continue to tolerate this criminal behavior from this lawless thug? Kick him out of office.

McConnell’s effort is supported by business groups such as the U.S. Chamber of Commerce and the National Association of Manufacturers and by conservative think tanks and pundits. Republicans at the state level are trying to pass similar measures [including Arizona, of course.]

And as Politico reports, 20 states have taken steps to limit the liability of the nursing home industry, which wields enormous lobbying power. The industry is now seeking similar nationwide protection from Congress.

This comes at a time when the Occupational Safety and Health Administration, the federal agency tasked with keeping workers safe, is taking a laissez-faire approach to the well-being of workers, issuing some voluntary guidelines and barely bothering to enforce existing rules.

The agency which is supposed to protect workers in the workplace is now a captive agency of the corporate titans of Wall Street under the Trump administration. This is what public corruption in “the swamp” actually looks like.

That, too, makes this a new iteration of an old Republican strategy: Gut enforcement of the laws that protect people, then forbid them from going to court when they get harmed. Catch-22, suckers.

Workers could be in a better position to demand things such as protective equipment if they had unions to advocate for them. But decades of a combined Republican/big business campaign to crush organized labor has left most workers isolated, one more prong of the strategy to insulate those with power and allow the frictionless utilization of all that interchangeable human capital stock.

Let’s consider the philosophical underpinnings of this effort. On a basic level, it’s just about protecting the powerful: While the courts are full of lawsuits filed by one corporation against another corporation, those aren’t the kind Republicans want to restrict. They’re outraged only when an ordinary person sues a corporation.

You may want to familiarize yourself with the concept of “neo-feudalism,” because this is the underlying philosophy for what is occurring. For a deep-dive explanation, see Robert Kuttner and Katherine Stone at the American Prospect, The Rise of Neo-Feudalism, and Joel Kotkin’s opinion adapted from The Coming of Neo-Feudalism at The Daily Beast, The Coronavirus Is Also Spreading a Dark New Era of Neo-Feudalism.

On an instrumental level, Republicans tend to view these kinds of questions in a particular way, one that justifies sweeping injustice brought down on thousands of people as a means of forestalling even the rarest instance of what they perceive to be someone getting over on the system.

Is there somebody getting food stamps when they don’t really “need” them? Then the answer is to cut benefits and force all food stamp recipients to navigate a bureaucratic maze to get their benefits. Better a thousand children go hungry than a single ne’er-do-well exploit the system to get something he doesn’t deserve.

Was there a guy one time who voted in his dead father’s name? Then the answer is to impose ID requirements that enormous numbers of people have difficulty satisfying. Better a million voters be disenfranchised than a single case of voter fraud go unpunished.

Is it theoretically possible that someone could sue a cafe owner, claiming that they bought a coffee there and later came down with covid-19, even if it would be almost impossible to prevail in such a lawsuit? If so, then we have to make sure businesses are free to endanger their workers and customers with no worries about being held accountable in court.

Quick aside: So a customer who slips and falls in the business, or who suffers burns when the waitress spills that hot coffee in her lap only needs to prove simple negligence to recover damages, but a business that disregards the CDC guidelines for safe reopening because they are only advisory rather than mandatory, courtesy of the Trump administration, that customer would have to prove gross negligence, i.e. “a reckless disregard for the safety or lives of others”? How does this double standard make any sense?

It is already a difficult claim to prove under simple negligence based upon causation, particularly if the customer was infected not by an employee but rather another customer who recklessly disregarded the safety and lives of others, because MAGA “freedumb!” Wouldn’t a “safe harbor” provision, i.e., demonstration of compliance with the CDC guidelines for safe reopening by the business as a legal defense to the negligence claim make far more sense? This clearly has not been well reasoned, and smacks of overreaching.

As it happens, there have already been some lawsuits filed related to the pandemic. But only a tiny portion of them have involved customers suing businesses. The vast majority involve workers suing to force their employers to provide adequate personal protective equipment, or businesses suing states over shutdown orders.

That brings us to the economic question, and the irony in what McConnell proposes: Sweeping liability protection wouldn’t help the economy recover, it would do exactly the opposite.

To get to a point where economic activity is what it was before the pandemic hit, we need two basic things. First, we need to have control of the spread of the virus. Second, we need people — not some people, not a dozen commando cosplayers protesting at state houses, not a few hundred idiots crowding a pool in Missouri on Memorial Day, but all of us — to have confidence that we can go to work and shop and eat without the risk of being infected.

Liability protection undermines both those goals. It will almost inevitably lead to more infections as some businesses ignore best practices and force their employees to work in unsafe conditions. And it will send a message to everyone else that businesses are being excused from safety requirements.

Like I said, this clearly has not been well reasoned, and smacks of overreaching.

How do you feel about buying a package of meat knowing that at the plant where it was packed, OSHA isn’t bothering to inspect, the workers are getting sick and the owners don’t have any incentive to keep anyone safe?

In the world Republicans want to create, most of us will be more reluctant to go out, because a situation where businesses have blanket protection and also aren’t being constrained by regulation is more dangerous for everyone.